We Ride Shotgun In The Porsche Taycan At Goodwood 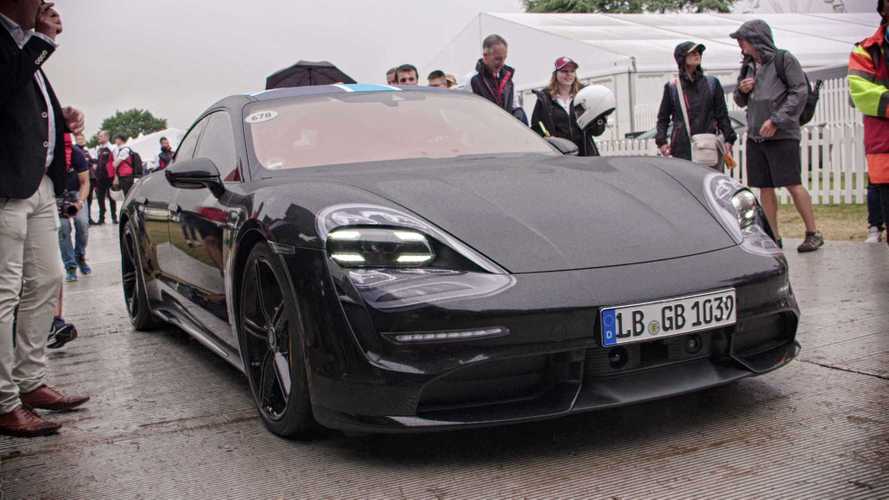 Presumably, there are now around 500 pictures and videos of me. Maybe more. But only because the visitors of the 2019 Goodwood Festival of Speed have put their smartphones up for a very special car. The one in which I happened to sit as a passenger. I am talking about one of the final prototypes of the Porsche Taycan. It has just given me the famous "Hill Climb" treatment.

Within three weeks, the Taycan will have completed three appearances on three different continents. The first was in Shanghai, as one of our readers warned us before anyone else. Now here in Goodwood. Finally, it will head to New York, for the 2019 Formula E Championship’s final race, on July 13.

We got the opportunity to take a quick ride shotgun on the electric sports car. Porsche will unveil it in September, at the Frankfurt Motor Show.

Porsche Taycan Prototype Impresses Us With Silence At Goodwood: Video
⠀

The key question is – of course – “Can Porsche also make EVs?” It surely can. After all, it's does not seem that hard to build an EV. Countless startups have proved it. But the Taycan has to offer that special Porsche mojo. The one that makes its cars unique. Almost like digital watches versus precision clockwork, such as Rolex, Patek Philippe, and so forth.

Since the premiere of the Mission E concept – at the 2015 Frankfurt Motor Show – a lot of brainwork flowed into the Taycan. Before trying to unveil them, I take a good look at the machine. Despite its camouflage, it does not require much imagination to figure out its final form. Flat LED headlights in front, four frameless doors, 21-inch wheels and a rear-end with some parallels to the current Porsche 911's. Overall, the Taycan makes a powerful, yet slim impression.

I take another look into the rear seats. The idea is to see what getting in feels like, especially without hitting my head. The gently sloping lines of the roof and the rear side windows remind me spontaneously of a 911.

Surprise: in spite of being 1.88 m tall (6,17”) and having a cap on my head, I sit in the back in a deep, but very comfortable position. There’s some space between the top of my head and the glass roof.

Legs and feet get enough space. One reason for this is the so-called "foot garage". It was created by a recess in the battery pack, as the development engineers around let me know.

But what about the cockpit? Still a well-guarded secret, it may not be photographed. We can only see some details under the disguise. There are displays and touchscreens, which are combined in a new operating concept. It seems Porsche wants you to feel surprised… At least for now.

Porsche will comment on Taycan’s technology in detail in the near future. Until then, the main cornerstones will have to live up to the motto "drive fast, load quickly".

The brand’s typical development goals for the over 600 hp all-wheel-drive EV were race-track performance, multiple acceleration capability – crucial on a sports EV – and a range that is suitable for everyday use.

The 800V architecture of the vehicle allows for shorter charging times: about 20 minutes for 80 percent of a full recharge.

Speaking of recharging, in front of the front doors are small fins above the air inlets. If you slide them, a cover glides elegantly out of the body and presents the power connection. On both sides, by the way, what prevents having to lead a cable around or over the car. Very convenient, since it does not matter if the wallbox in your garage is on the left or on the right.

The lithium-ion battery pack mounted under the passenger compartment will have a capacity of approximately 90 kWh. The Porsche Taycan has a trunk and a frunk, but typical customers will prefer to hear it has over 600 hp, as we already mentioned, and a top speed of more than 155 mph (250 km/h).

That, too, is not great art in itself, but Porsche engineers have two things in mind: repeatable longitudinal dynamics plus good lateral dynamics. Strictly speaking, to take less than 3.5 seconds to go from 0 to 62 mph (100 km/h) multiple times and not to corner like a Mercedes-Benz Sprinter.

Enough with the theory, it is time to get to practice and to the passenger seat. In front of me is the completely covered cockpit. “Remember, do not take pictures!”

On me: a full-face helmet. Next to me: a visibly exhilarating driver from Porsche. With Taycan’s doors duly closed, we head to the start and attract as much attention as Boris Johnson in flamingo shorts and a Hawaiian shirt.

We are finally at the start. My driver chooses the "Sport Plus" driving mode. After all, we are here in Goodwood and not at a tea party. My hand is already looking for – safety's sake – the grab handle. A wise decision.

From the very beginning, the Taycan simply goes unimaginably fast and pushes me into the seat. Holy straw sack! (Actually, my reaction was a bit more heartily formulated, if you know what I mean.)

Spontaneously, my mind wanders to warp drive on "Star Trek", while my colleague on the steering wheel throws the car into the corner without (apparently) braking hard. Roadholding: very good!

Nine curves and 1.13 mile (1.82 km) later, we jet with a not unappealing sound (my impression: a touch of a turbine) through the finish.

My driver is clearly having loads of fun and cannot avoid the laughter, but I am no longer astonished. Porsche has done a damn good job. The final judgment – the one made behind the wheel – is of course still pending. The Taycan will only be put for sale by the end of 2019.

Until then, I can only draw a simple conclusion. In a way, the Porsche Taycan is a four-door 911, but fundamentally different. Same parents, different brothers – similar in driving dynamics, completely opposite in terms of motivation. Whatever. As the composer Gustav Mahler once aptly said: “Tradition is not the worship of ashes, but the preservation of fire.”