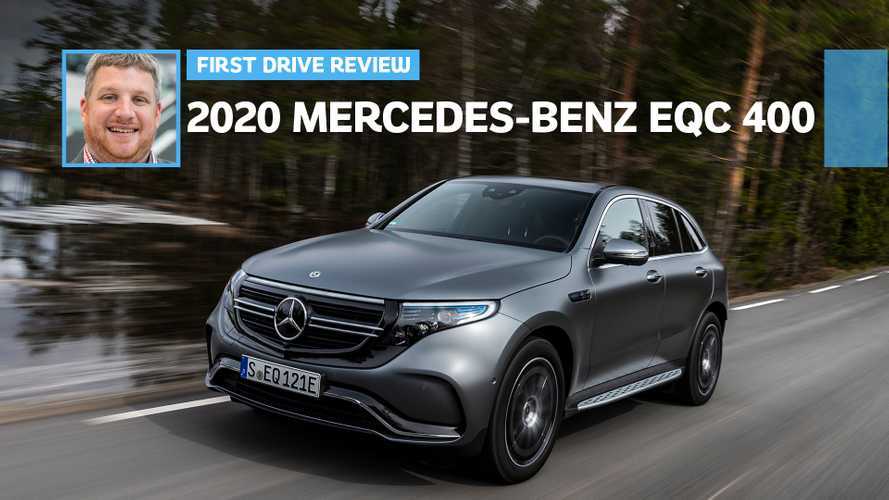 Is EQ for you?

Forgive this cliché: the 2020 Mercedes-Benz EQC 400 is the Mercedes-Benz of electric vehicles. There, I wrote it. And to be honest, I doubt that I’ll be the only one to make such a claim.

Clichés aside, Mercedes-Benz has successfully married all the best qualities of its combustion-powered products with a zero-emissions powertrain on a broad scale. This is not a limited-run of B-Class Electric Drives or a one-off electric supercar. The EQC is the first of a new breed of vehicles for Mercedes-Benz. And it’s as approachable as anything the company has built over the last century.

Let’s get the stats out of the way first. The EQC packs an electric motor at each axle and an 80-kilowatt-hour lithium-ion battery. The combination is good for 402 horsepower, 561 pound-feet of torque, and, according to Mercedes-Benz, 277 to 293 miles of range per charge while consuming power at the rate of 20.8 to 19.7 kWh per 100 kilometers, when measured on the New European Driving Cycle. U.S.-specific numbers, via the EPA or on the globally accepted WLTP scale, aren’t available just yet. Recharging at 240-volt/32-amps takes 10 hours to go from 10 to 100 percent. Every EQC can handle DC charging at 110 kilowatts, allowing owners to go from 10 to 80 percent charge in just 40 minutes.

While it’s tough to evaluate the EQC with only NEDC’s more optimistic range estimates (it will likely shake out to around 210 to 215 miles once more accurate estimates are done), after driving around Oslo, there are reasons to be positive.

The EQC400 gives consumers impressive latitude to adjust the driving experience. In addition to four driving modes (Sport, Comfort, Eco, and Individual), there are five different regeneration modes available, and unlike Jaguar, which forces owners to argue with a touchscreen display, the EQC modifies an element from combustion-powered cars: paddle shifters. This isn’t a new feature – Hyundai and Kia’s EVs also use paddles to adjust regen – but we bring it up because it’s such a pleasurable way to make adjustments on the fly.

Start the EQC and put it in drive for the base level of regeneration. Tap the left paddle once for D- for more aggressive regen and twice for D--, which allows one-pedal driving. Or, yank the right paddle until the digital instrument cluster shows D+, which turns off regeneration entirely and makes the EQC feel more like a normal crossover. But the most intriguing setup is D Auto, which hands over regeneration to the EQC’s Eco Assist suite for adaptive energy recapture.

On its own, Eco Assist coaches the EQC’s pilot in the ways of efficient driving, drawing information from the navigation system, traffic signs, and the active safety suite’s camera and radar systems to help eke out additional driving range. D Auto uses that information in an active rather than passive way. If it detects a slower car in front, the system can add regen to maintain the gap. Likewise, it will apply regen to stick to the current speed while driving downhill. And if the car thinks you don’t need regen, the EQC will coast along. In short, D Auto helps drivers regenerate electricity without forcing them to think too much.

In mixed driving around Oslo and the surrounding fjords, the range estimates from my EQC tester were largely spot on. But Oslo is not an American city, and by and large, the speed limit rarely exceeds 80 kilometers per hour (about 50 mph). Along with the limited driving range information, there simply isn’t enough data to assess how usable the EQC is in a setting like the U.S.

Of course, it’s still a good bit of fun to zip around in. The EQC is not a sporty crossover by any stretch, but it can get to 60 miles per hour in a brisk 4.8 seconds and has more than enough speed for everyday driving. No matter how hard you drive, though, the EQC does its business with nary a sound (besides the government-mandated warning sound pedestrians hear). Mercedes opted out of adding an artificial “exhaust” note to the EQC – a subtle whine from the single-speed transmission and the roar of the tires is all you’ll hear, whether beating the EQC senseless or driving like a little old lady on her way to Sunday services.

I’d love to tell you about how the EQC handles, but gently curving, heavily trafficked Norwegian roads and a constant, pounding rain limited my chances to test the EV’s agility. I’ll confidently call the EQC’s ride comfortable and composed, though. It isolates its passengers well, both from impacts on the suspension and the noise those imperfections make in the cabin. The ride is impressively quiet, to a degree that’s difficult for a silent electric car to manage. Gas-powered cars benefit from engine noise to overshadow road noise, but the EQC is tomb-like without a mechanical soundtrack’s help.

The EQC is tomb-like without a mechanical soundtrack’s help.

A big part of the EQC’s quiet cabin is down to smart aerodynamics. Engineers and designers massaged the SUV’s shape to allow air to move across its body with as little interference as possible. There is a grille, but behind it are shutters that remain closed until cooling is absolutely necessary. Traditional Mercedes wheel designs – including some looks borrowed from AMG, like those featured in the gallery – get aerodynamic takes to prevent turbulence. The mirrors direct air around the greenhouse to a trio of spoilers.

All of these pieces help the EQC cut through the air as efficiently as possible. Compare it to the GLC-Class, a car that’s easy to confuse the EQC with. Both cars share a 113.1-inch wheelbase and measure 82.5 inches wide, while the EQC is slightly longer at 187.4 inches to the GLC’s 183.3 inches. But the electric model’s coefficient of drag is a sleek 0.27, compared to the GLC’s 0.36. The EQC isn’t as aerodynamic as the Tesla Model X or Audi E-Tron (0.24 and 0.25, respectively), but I’m not really sure how it could be without sacrificing the ample cargo space.

Intelligently designed the EQC’s body may be, but it’s not especially attractive. Particularly from the front, where the aerodynamics dictated the design be as smooth as possible, the revolutionary look of the headlights and grille arrive at a time when Mercedes’ exterior design is becoming consistently attractive after years of inconsistency. Based on what I saw at the launch in Oslo, owners will choose from multiple grille designs (the AMG-inspired look in the gallery was my favorite) – choose wisely. The back is more pleasant, and the profile stands out with the subtle downward curve of the roof rail; a style choice that also helps the EQC’s aero. It is pleasantly compact, though.

There are no questionable touches in the cabin.

There are no questionable touches in the cabin, though, and the EQC does a far better job of sticking to Mercedes’ current design language. There’s a slab of glass and plastic atop the dash that holds two 10.3-inch displays (an all-digital instrument cluster on the driver’s side and a center screen running the new MBUX infotainment system), real metal switchgear throughout the cabin, beautiful metal inserts in the door panels, and a 64-color ambient lighting suite that’s the best in the business. You’ll find similar touches in a new E-Class or S-Class.

But on both the EQC’s interior and exterior, there are unique touches that allow this EV to stand out from its siblings. Vehicle-spanning light strips fore and aft look stellar, I dig the electric-blue EQC badges on the side grilles, and even the badges on the tailgate get their own unique font. And in the cabin, the EQC makes a statement through (of all things) its climate control vents. Rather than circular nozzles, there are rectangular slats – horizontal below the center display and vertical on the outside edges of the dash. Their construction still feels hefty and the materials are impressive, but the highlight is beautiful splashes of rose gold that brighten up even the drabbest of the many available interior color schemes.

And whichever of those options you choose, rest easy knowing the EQC’s electric mission sacrifices next to nothing in terms of usable space. Sticking the flat battery pack in the floor means an ample cargo hold (although unlike some rivals, there is no cargo space under the hood). Unsurprisingly, Mercedes hasn’t listed total cargo volume, but it’s at least on par with a GLC-Class, which has enough room for a weekend’s worth of bags for four adults. And those four full-size humans be quite happy in the EQC’s seats. The front seats are ample and supportive, and there’s more than enough head, shoulder, and legroom. It’s a similar story in the back, where two adults can happily sit as the battery goes from 100 percent to zero.

The EQC won’t hit U.S. dealers until early 2020 at the latest and there’s still a lot of missing information. Aside from the U.S.-spec range and MPGe figures, Mercedes hasn’t released pricing (although reps told me the final figure would be competitive with the $69,500 Jaguar I-Pace and the $74,800 E-Tron), cargo volume, or weight. But based on two days of driving in and around Oslo, the 2020 Mercedes-Benz EQC400 looks, feels, and drives like a compelling entry in a rapidly growing class. Whether the finalized specs allow it to be one is another story entirely.