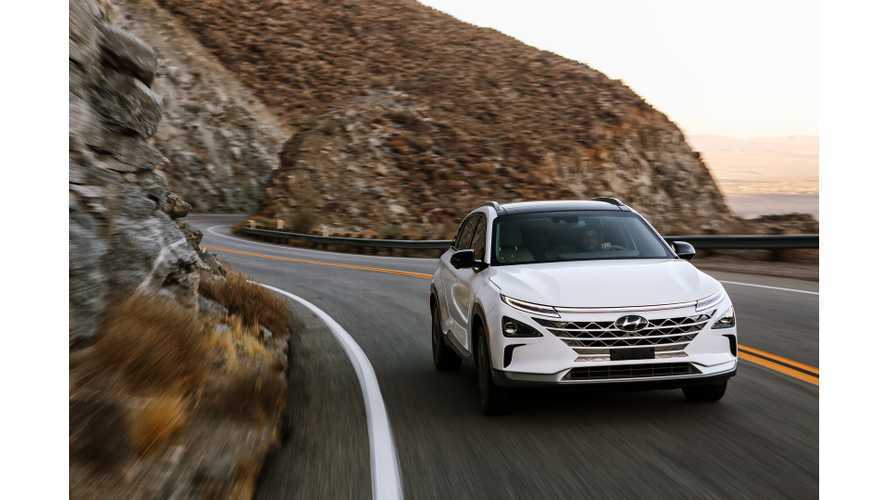 The 2019 Hyundai Nexo is a bespoke unicorn of a vehicle as it is only available in the United States at three Hyundai dealers in California.

The Nexo is Hyundai’s newest hydrogen fuel cell electric vehicle (FCEV), replacing the Tucson FCEV, which has been available in very limited numbers since 2017.

A Rare and Exclusive Vehicle

The 2019 Hyundai Nexo is a bespoke unicorn of a vehicle as it is only available in the United States at three Hyundai dealers in California (one in San Jose, one in Van Nuys and one in Tustin) because there are 39 hydrogen refueling stations state-wide, the most significant number of stations in the US.

What's It Like To Drive 900 Miles In A Hyundai Nexo Hydrogen Car?

***InsideEVs.com thanks Clean Fleet Report for allowing us to share this review with our readers. Check out Clean Fleet report here.

The Nexo’s fuel cell stack converts hydrogen to electricity and as a byproduct emits just water. With a range of more than 354 miles on a tank of hydrogen, the Nexo has a range that exceeds most of the long-range battery electric vehicles on the road today and is on par with the average range of conventional internal combustion engine (ICE) vehicles. Refueling in as little as five minutes, the Nexo also beats the fastest recharging times that BEVs can achieve today and has refueling parity with ICE vehicles too.

The relevance of fuel cell vehicles and lack of public refueling infrastructure has been debated ad nauseum, and the purpose of this test wasn’t to relitigate those objections, but rather to evaluate the Nexo on its merits as a midsized crossover utility vehicle (CUV) that just happens to be powered by a hydrogen fuel cell.

The Nexo is a very elegant five-passenger CUV that has top-notch quality in fit, finish and variety of materials.  Because it is such a low-volume vehicle, every Nexo is hand-built with almost as many quality inspectors as assemblers at its factory in Korea.

Operating the Nexo is precisely the same as a conventional battery electric vehicle, just jump in, push the start button, put it in drive, and off you go.  As with a BEV, there are drive modes: Comfort, Eco and Eco Plus.  There aren’t any “Power” or “Sport” modes as this is a cruiser, not a speedster.  The Nexo is a front-wheel-drive; there is not an AWD option available.

At speed, the Nexo is amazingly quiet thanks to its electric drivetrain, extensive sound-proofing and insulated glass.  Hyundai claims that at 60 mph the cabin noise is only 63 dB, which during our test drive was close to our measurements of 62.8 dB. Combine that with an excellent (for a CUV) overall cd of 0.32, and the Nexo slices through the air with grace and aplomb.

The Nexo has a very cutting-edge, tech-oriented interior that has some of the most advanced driver technology available. It features a full suite of advanced driver assist systems, including forward collision-avoidance assist, lane following assist, driver attention warning and high beam assist. It also offers remote smart parking assist, which enables Nexo to either autonomously park or retrieve itself from either a parallel or perpendicular parking space with or without a driver in the vehicle. Additionally, Hyundai’s blind-spot view monitor is an industry-first technology that uses cameras to project side views from Nexo in the center cluster for the driver while changing lanes. Those cameras monitor an area that cannot be seen by a traditional rearview mirror.  We found that the Nexo’s L2 (Level 2) autonomous features to be on par with other manufacturers including Nissan, Tesla and Volvo.

The interior is dominated by a pair of 12.3-inch digital displays that stretch across the dashboard, providing both driving information as well as an infotainment display that supports Apple CarPlay and Android Auto.  A floating center console has the dual climate and infotainment controls, drive mode selection and push-button transmission. There is also a cute cubby for your phone and other odds and ends.  Below the center console is additional storage and a wireless phone charger.

The Nexo is manufactured with materials that are very eco-friendly, including soybean-oil based polyurethane paint, bamboo-thread-based biofabric along with bio-plastic and bio-carpet extracted from sugar cane. Bio-based materials were applied to 47 different parts and reduced CO2 emissions by 26 pounds during the manufacturing process.

Built on a unique platform based on the Hyundai Tucson, the Nexo CUV has a second-generation fuel cell system and powertrain.  It boasts a 95-kilowatt (kW) fuel cell stack paired with a 1.56-kilowatt-hour “buffer” battery mated to a single 120-kW motor that delivers 291 pounds-feet of torque driving the front wheels. Its weight is comparable to other long-range BEVs coming in at about 4,000 pounds.

When we drove the Nexo on urban streets, freeways, twisty mountain roads, it was always up to the task, and whisper quiet in all driving situations.  Watching the EV power utilization screen on the infotainment screen it was fun to see the power alternate between the fuel cell and regeneration back to the buffer battery.  Occasionally, on a long steep grade, the buffer battery would provide power, but the fuel cell was never overwhelmed.  The Nexo started immediately every time and is rated to be able to start in temperatures as cold as minus 22-degrees Fahrenheit.  The lowest temp that we encountered during our time with the Nexo was 33-degrees Fahrenheit, and starting it was a non-event. The Nexo has an EPA estimated range of 354 miles; in our testing, we drove 186 miles on about a half a tank of hydrogen.

The Nexo comes in two versions, with pricing starting at $58,300 or leasing for as little as $399+tax for 36 months. The Nexo qualifies for a $5,000 California rebate.  Included in the purchase or lease is hydrogen fuel fill-ups free of charge for the first three years.

In the first quarter of 2019 Hyundai has managed to sell or lease only 60 copies, making it a pretty rare vehicle. For comparison, Nissan sells 35 copies of the Altima every hour seven days a week.  The Nexo, or any FCEV for that matter, aren’t going to take the EV market by storm because there are just too many variables that need more time and investment to achieve significant market penetration, even in EV-crazy California.  There will need to be billions more  invested in refueling infrastructure to make FCEVs a significant part of the U.S. fleet.  The Nexo is a very well-done proof of concept, and if you live in the San Francisco Bay area or Los Angeles, a Nexo could be on your CUV consideration list. But for most, it’s not a viable alternative. It’s a chicken and egg problem, but with manufacturers like Hyundai pushing the envelope, there is always a chance.