2019 Audi E-Tron First Drive: A Move For The Mainstream

Audi hopes to reach a whole new audience of buyers with an EV that feels right at home.  A group of auto journalists gathered this week in the oil-rich United Arab Emirates to drive the Audi e-tron, the German luxury brand’s first all-electric vehicle. The 250-mile journey in Abu Dhabi – starting at the eco-oasis of Masdar City and passing by camel farms and through sand dunes – revealed Audi’s audacious EV strategy: to produce an utterly normal luxury crossover. 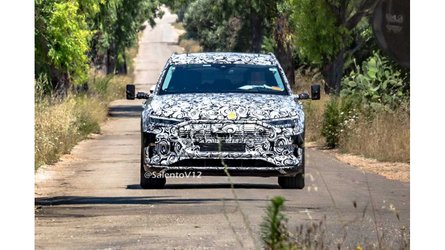 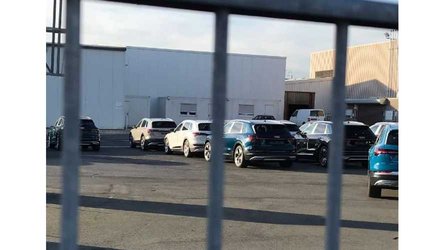 See Lot Full Of Audi e-tron SUVs Outside Of Factory

InsideEVs was among the first group to experience the e-tron. From the moment I settled into the electric SUV’s handsome cabin and pressed my right foot heavily into the accelerator pedal, I could see that Audi had flipped the script on electric vehicles. The response from the 400-horsepower powertrain – with two motors, one on each axle – was not the twitchy reaction that we have come to expect from an EV. The power is certainly palpable, but it comes on with polite confidence that refrains from jolting the vehicle’s inhabitants back into their seats. This EV doesn’t launch. It gushes.

“Our goal was not to out-Tesla Tesla.”

The driver-selected handling and suspension modes, from Comfort to Dynamic, should be renamed as Smooth, Smoother, and Super-Silky Smoothest. Again, Audi is betting its multi-billion-dollar EV investment on normalcy and ease of use. In that sense, the e-tron SUV ushers in the next phase of electric vehicles in which familiar driving behavior and vaunted auto brand attributes are the highest virtues. For an Audi SUV, that means comfort, cargo space, reliability, and all-road capability. Sorry fellow early EV adopters, it’s time that we step aside to make room for legions of less ardent everyday drivers.

“Our goal was not to out-Tesla Tesla,” said Carter Balkcom, Audi’s Ingolstadt-based product marketing manager for electric vehicles on the eve of our first drive. “It’s to build on the strengths of being Audi.” To Balkcom, that also means high-quality manufacturing, sales, and service. “Maybe you’re a guy that says my Tesla breaks down all the time, so I'm ready for Audi’s answer to EVs,” he told me. Ouch.

The 100-mile morning leg of our drive was a straight-ahead highway stint to the Sheikh Zayed Desert Learning Centre, a marvelous piece of architecture (see the e-tron parked in front of it below). Cruising to get there at between about 50 to 85 miles per hour down a monotonous sunbaked roadway, the Audi electric crossover’s most remarkable features were not novel innovations that smacked you in the face but subtleties that escape notice. Most notably, the e-tron to my ear is the quietest electric car yet. Thomas Stinner, an automotive acoustics engineer at Audi, said, “When you are in the e-tron, you are sitting in a sealed cabin. In an electric car, you can’t have a single hole for sound to escape.” Then he delivered an impromptu personal TED talk about the e-tron’s multi-layer windows, quiet motors, the use of foam to fill gaps in wheel wells, and strategies to kill some frequencies at some speeds while allowing others to survive at other speeds for driver feedback. He talked about audio pitches that can reach the footwell but not human ears. All these strategies, Stinner explained, were applied to the unique acoustic profiles for road noise, tire noise, engine noise, and wind noise. The strategy worked so well that Audi does not use active noise cancelation from the e-tron’s speakers.

By late morning we had reached the foot of Jebel Hafeet, the craggy limestone peak that rises 4,000 feet from the desert. Edmunds.com once dubbed the drive up Jebel Hafeet’s summit as one of “the world’s greatest driving roads.” The e-tron was undaunted by the ascent. It handled the switchbacks with aplomb.

The few minutes to the top were arguably the most useful evaluation of what a typical driver of an electric Audi crossover might experience in a road trip to, for example, Lake Tahoe. Like the e-tron’s official numbers for sprints from zero to 100 kilometers per hour (62 mph) – it’s officially 5.7 seconds – there’s more power here than any typical driver needs. The same holds true for the off-road rocky trails and windswept sand dunes we traversed later in the day. The five-passenger e-tron, which is between the size of a Q5 and Q7 SUV and equipped with 23.3 cubic feet of luggage capacity not including the 2.1 cubic-foot front trunk, is more likely to be making treks to soccer practice and weekend trips to Costco than the rugged locales of Eastern Arabia. It can handle both.

After recuperating energy on the way back down the hill, we arrived at the Desert Learning Centre with 27 percent of the battery’s nominal 95 kilowatt-hours of charge. Audi provided a makeshift 150-kW quick charger there to demonstrate how the e-tron’s battery allows for true road trips. Highway pit stops of about 30 minutes can restore about 180 miles of driving range. Of course, this capability will require the new breed of public chargers only starting to be installed by Electrify America, a subsidiary of the Volkswagen group. Because the temporary setup in Abu Dhabi lacked the liquid-cooled cabling required for a full 150 kilowatt of charging, our test car needed nearly an hour to restore its total amount of range, pegged at 248.5 miles in the WLTP driving cycle (and not yet officially range-rated by the U.S. Environmental Protection Agency).

Here’s where things get tricky. Audi acknowledged that the official numbers for range will be less than 248.5 miles – possibly around 230 to 240 miles. For an EV with a nominal 95-kWh pack, it’s becoming clear that the e-tron could be one of the least efficient of the new breed of long-range EVs. Our day of driving put the e-tron SUV’s efficiency at about two miles per kilowatt hour. “I don't think the customer cares about the absolute efficiency number,” said Matthew Mostafaei, Audi E-Tron vehicle manager. “There are a number of other factors that are more important.”

Mostafaei said that Audi responded to direct customer feedback that their priority is a normal-looking, upright SUV with optimal cargo capacity. Audi believes that the efficiency number is also less important than adding a relatively heavy safety cage and being very conservative with the amount of the battery’s capacity that’s used. It’s part of the same strategy to mainstream EVs. Using less of the battery’s energy (officially rated at 95 kWh) means that quick-charging happens faster because you are never cramming the last electrons into the pack.  “It's the fastest EV to 80 percent on the market,” said Mostafaei.

Gallery: Audi E-Tron Outside & In

Gallery: 2019 Audi E-Tron First Drive: A Move For The Mainstream

I asked him if he can live with a lower MPGe than what competitors offer and the potential negative reaction from EV enthusiasts. He replied, “I think we have to live with it if we are going to give a customer everything that the e-tron offers them.” Mostafaei told me that some of the auto journalists on the e-tron drive in Abu Dhabi could barely tell the difference from being in a Audi Q8 SUV with a gas engine and an e-tron with an electric motor. That, in a nutshell, was Audi’s goal – even if it means taking heat for a lower MPGe number. The e-tron is still a ton more efficient than a Q8-type vehicle.

The End of One-Pedal EV Driving?

In essence, to bring electric vehicles to the masses, Audi will ignore some of the efficiency-obsessed predilections of long-time EV enthusiasts, including me. It also means killing long-held EV doctrine – such as the sacred cow of one-pedal driving. With the Muslim call to prayer echoing outside my door as I type these words, I remember what happened the first time I lifted my foot off the e-tron’s accelerator. With essentially no discernible regen, the vehicle felt like it was sailing away from me. Where’s my regen, dudes? Throughout the rest of the day’s drive, I came to re-learn and appreciate using the brake pedal. Audi’s Carter Balkcom winked at me and said, “Brake without guilt. One-pedal braking is a thing of the past.”

Gallery: 2019 Audi E-Tron First Drive: A Move For The Mainstream

In what I see as Audi’s most clever technology innovation, the desirable level of added regen in the e-tron is not controlled by shifting the car into Low, applying a special mode setting, or using a steering-wheel-mounted paddle shifter. The e-tron repositions the level of added regen to the foot-controlled brake pedal where it can be applied with much higher variability – just like you use a gas or brake pedal in a gas-powered car. We will provide a lot more technical background about how this works in later posts. But the important thing for the e-tron and the other Audi electric cars on the way is that everyday drivers won’t have to be converted to the ways of one-pedal driving or any special insiders’ way to buy, own, or drive the vehicle. They will get all the EV benefits, including the refined feeling of controlling an electric car’s speed, by simply stepping on the accelerator and brake pedals like they already do.