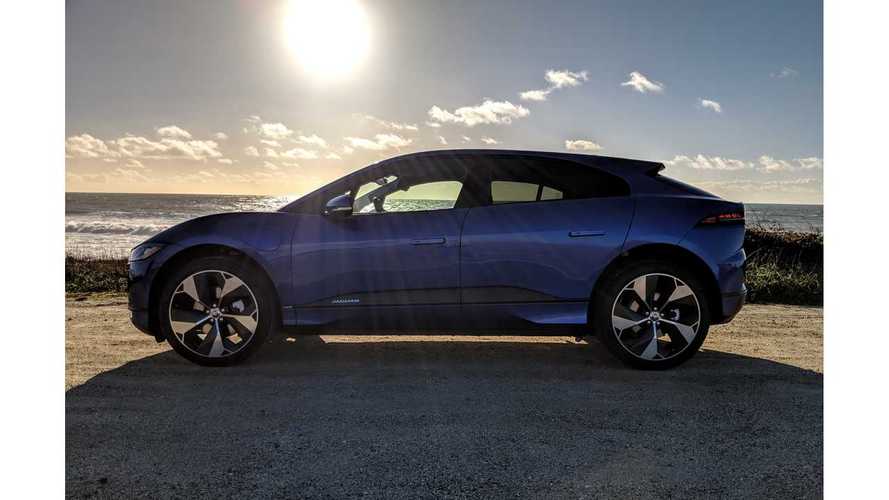 We get behind the wheel of one of the first I-Paces in the U.S.

After only 5 customer deliveries in the month of October, Jaguar increased its US delivery total to 165 in the month of November. So with less than 200 I-PACEs on US roads, securing one for an extended road test isn't easy. However, thanks to InsideEVs occasional contributor and new I-PACE owner John Higham, we were able to secure one for a 250+ mile road trip, less than 24 hours after he picked it up from Stevens Creek Jaguar in San Jose California.

I really liked the heads-up display (but then again, I haven't seen a heads-up display that I didn't like), and the feel of the steering wheel. The seats are supportive and comfortable, and they are ventilated as well as heated. There's plenty of leg room in the back seats and lots of cargo space in the rear. The frunk has a tiny bin, like my BMW i3, which is pretty useless for anything other than a portable EVSE, connectors, and perhaps an extension cord.

The Apple Carplay was able to utilize the entire center display screen, but when we switched to Android Auto, it left a large bezel of unused screen which was so annoying we switched back to the Carplay. The rearview camera is very clear but a bit more of a fish-eye view than I prefer. The car felt balanced and stable in turns, and outward vision is fine. The Adaptive Cruise Control with Steering Assist worked well, as did the Lane Keep Assist.

The large rear cargo area can hold a lot of gear. My suitcase, backpack and carry-on bag fit with a lot of room to spare.

Maybe it's me, but I just love the new interiors coming out of JLR. A good friend has a Velar, and I really like driving in it because of the interior. The I-PACE's interior is unique, but retains the styling cues found in other JLR vehicles. It's sleek and high-tech and has extremely comfortable and supportive seats. The center console angles up to the dashboard and has lower storage compartments for small accessories like sunglasses.

I like the implementation of touchscreens and physical buttons & knobs, it really feels high-end. But that's not a knock against the Tesla Model 3. I also like Tesla's minimalistic approach on the Model 3, and it fits that vehicle. Jaguar is focused more on luxury than Tesla, and I think the I-PACE's interior will win over some people cross-shopping.  More choices are good, and there's room for both in the marketplace.

While it may not be able to keep up with a Tesla P100D, it certainly has enough torque to push you back in the seat when you mash the throttle. Jaguar claims a 0-60 time of 4.5 seconds, and after driving it, I have no reason to doubt that claim. With 394 horsepower and 512 pound-feet of torque delivered to all four wheels, accelerating from 40 mph - 80 mph was also very impressive. It felt nearly as potent as the Tesla Model 3 Performance I recently drove, and that was a bit of a surprise. As mentioned above, this car was brand new when our road trip began, so we didn't test out any of the off-road capabilities. However, InsideEV's Steven Loveday had a chance to do that on the I-Pace press drive in Portugal earlier in the year, and you can read his impressions on that here.

The steering feels a little heavier than I anticipated, but it is crisp and engaging. Handling felt fine, but admittedly, I didn't drive like I was auto-crossing. The height-adjustable air-suspension is firm while cornering, and also kept the ride smooth and insulated from road irregularities. Jaguar used a multilink front suspension from the F-Type, however the rear is an integral-link suspension, similar to what's used in the F-Pace and E-Pace. It works.

You might be surprised that I've listed artificial creep in the "good" column because I've previously stated that EVs don't need it. Well, they don't "need" it, but after driving the I-PACE for four hours in California traffic, I can see the use case for it, if it's properly implemented. If you toggle the Vehicle Creep on the car it will softly move forward once you release the friction brake, giving the car a slight nudge before you depress the accelerator. It's a nice feature in bumper-to-bumper traffic, but I'd personally turn it off for all other driving.

The artificial cabin sound was another story. Jaguar calls it Incar Driving Dynamic Audio, and it's a weird mixture of the sound of an electric motor, mixed with the sound of the Jetson's flying bubble car. It's definitely not for me, but I'm sure some people will like it. I have both of these features listed in the good column because they can be turned on or off, allowing the owner to decide how they want their car to be set up. Offering more choices and letting the owner decide what they want is good, and I'm glad Jaguar understands that. Unlike some of the German manufacturers that like to decide for you, because "they know better."

The regenerative braking and vehicle creep settings are found on the same screen of the vehicle settings.

Jaguar uses a simple two-mode regenerative braking system, you choose High or Low. In Low mode the car almost freewheel coasts and the regen is very mild. It kind of feels like an automatic transmission that's slightly holding the car back. Perhaps Jaguar wanted Low to mimic a conventionally-powered car for owners who were more comfortable with that feeling. However, flip the switch to High and the regen level increases dramatically, and you can pretty much drive with one pedal. The only thing I found a little annoying is that unlike some other EVs, the I-PACE seems to disengage the regen at about 7 mph.

You'll be slowing down nicely coming up to a red light or stop sign in full regen, and once you hit 7 mph, the car seemed to fully release from regen and freewheel. I'm sure I'd get used to it, but in my limited time it was a little annoying. So, while it's not the best implementation of regenerative braking I've used, it is good, and not over complicated. I think this system works well in the I-PACE.

I know this has been stated already by others, but it can't be ignored. Even though the I-Pace is EPA rated at 234 miles. We were only able to squeeze out 200 miles of range and averaged only 2.5 mi/kWh for the roughly 250-mile round-trip journey from San Francisco to the recently-opened Regargo high-speed DC Fast charge stations in Prunedale, California.

I may be nitpicking here, but it wasn't quite as instantaneous as I'd like to see, and the owner, John, remarked that he was a little surprised that it wasn't quite as snappy as some other cars. However, this isn't just an I-PACE thing, it's Jaguar's user interface, and it's just not as responsive as some competitor's systems. Deal breaker? Certainly not, but it's worth noting.

Charging up at the Prunedale Recargo DC Fast charge stations

OK, the charging isn't really "bad," and I really shouldn't be complaining about this, but I was expecting (and excited) to see the big cat pulling 100kW from the new high-speed Recargo DC Fast charge stations in Prunedale, CA. Once plugged in it was immediately clear the Jag was topping out at 83 kW and not pulling any more than 200-amps. If I had done some research before this trip, I would have found that others, like Youtuber, Bjorn Nyland and E-Auto-Vlog had already tested out an I-PACE and found that 83 kW was currently the car's limit.

Electric vehicle enthusiast and author, David Bricknell put together a nice graph comparing the charging profiles of the I-PACE with three points of data including our charging experience in Prunedale.

Another aspect of the I-PACE's charging profile that was disappointing was that the full charge rate began tapering down after only 20 minutes of charging, and with the state of charge at only 50%. I would have hoped to see it reach closer to 80% before the charge rate began to slow down, but that isn't the case. There is hope for improvement though. After doing some research, I've found out that this is what Jaguar calls CCS1.0, and CCS2.0 should be rolling out soon in an OTA update which will boost the Jag's maximum charge rate up to at least 100kW. So, while I've categorized this under "bad," it's really not all that bad, just a little disappointing, and it seems like an imminent future update will make improvements.

The Recargo DC Fast Charge stations in Prunedale have really nice display screens and offer a snapshot of the charging session profile.

Like any electric vehicle, the I-PACE isn't perfect. However, it offers a nice balance of performance, luxury and has enough range to allow most owners to use it as their only car. Jaguar has brought the first real Tesla competitor to market, beating Audi by more about half a year, and Mercedes, Porsche and BMW by more than a year.  It's a legitimate performer that can also haul the family, and go on road trips, and it does it all with comfort and style.

It will be interesting to see how the market responds to the new e-Jag, especially here in the US. Tesla has really captured the imagination and loyalty of many seeking high-performance, cutting-edge electric cars and their Supercharger network is an amazing advantage. The CCS high-speed DC Fast charge networks are lagging behind what's being installed in Europe, and I think some US buyers are going to be concerned with that. Electrify America is just now starting to get stations in the ground, and should be accelerating deployment soon, which will help. Hopefully, the dearth of high-speed charging options won't deter too many potential I-PACE buyers, because it's really a great car.