We Have Luv For The Arcimoto FUV

If you drive it, you will too.

I am just a little disappointed. I'm piloting a prototype from Arcimoto around a bend of a quiet residential Tallahassee street and the experience is not what I had secretly been hoping for. It's not the fault of the three-wheeler. It's me. I had wanted it to mimic a different kind of machine, one from my youth, but the all-electric FUV (Fun Utility Vehicle) is its own thing. Luckily, its unique charms silenced any disquiet in my head and soon won over my heart. 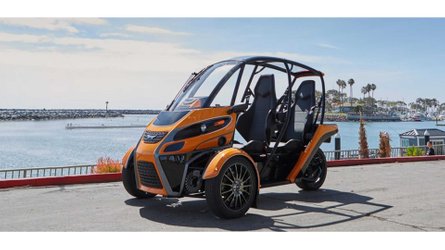 Arcimoto Kicks Off Production Of Pilot Run Of Electric FUV 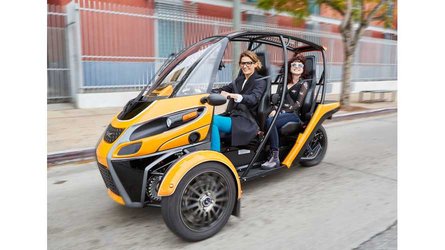 Meet The All Electric Arcimoto FUV

Growing up on Canada's east coast, I spent as much time as I possibly could on the back of the family's trusty Polaris snowmobile. Every moment brought me unrivaled joy. Bombing down the frozen Petitcodiac river or carving my way through snow-laden spruce while open to the elements, it imbued me with an incredible feeling of freedom. Motorcycle enthusiasts say similar things of their riding experience. This 3-wheeled EV, with its sides equally as open, captures much of that same awesome feeling.

I've been watching the progress over Arcimoto for some years now, so when the invitation to actually drive their pre-production machine arose, I jumped at it. A few days later and I'm in a parking lot of Cascades Park in Florida's capital getting a bit of pre-flight instruction from company communications specialist, Jonathan Miller. He and a small team are en route to a big soccer conference in Miami, making stops along the way to show off the FUV to order holders and other interested parties.

The controls are pretty simple and about what you'd expect. Quite similar to a motorcycle, it sports a twist throttle on the right handlebar, along with a forward-neutral-reverse gear selector switch. What one would typically take for a front-brake lever actually actuates the regenerative braking, which is quite strong. It can come to almost a complete stop using regen alone, or just be used to supplement the right-side foot brake. In practice, the foot pedal only came into play at stop signs.

The left handlebar is home to the turn signals, horn, and light controls. The center console, which will be somewhat different in the final production version, has switchgear for the handlebar grip and seat warmers, the windshield wiper and parking brake.

Rolling slowly on the throttle was a revelation. From a standstill, it eases softly into motion, belying the power that remains with further wrist twisting. The twin AC motors powering the front wheels sing the electric song of my people, increasing steadily in their pitch, syncing with the easy-to-read digital speedometer.

The first slow turn reveals an ample amount of steering boost. Progressive, it makes easy work of low-speed maneuvers but firms up as the pace quickens. Later, I would drive the 2nd FUV the team has unloaded from the trailer which was an earlier build. That one had no steering assist and the difference was dramatic.

Unfortunately, our route kept us on streets with 35 mile-an-hour speed limits, so I was unable to get a real sense of the machine's manners at higher speeds. At this lower, in-town pace, everything feels plenty planted. Unlike riding a snowmobile or motorcycle, there is no need to lean into the turns. In this respect, it's quite car-like.

At these lower speeds, acceleration was impressive enough. It felt like you'd have no problem getting the jump on most cars at a traffic light. Although the initial hit isn't too hard — it's not engineered for the drag strip, after all — it pulls like an extremely motivated mule as momentum builds. Reading reports of other test drives, it seems people are even more impressed by its giddyup at higher speeds. The official 0-to-60 miles-per-hour figure is 7.5 seconds.

Constrained by time, my turn hustling the FUV around the test route ended too soon. The team needed to hit the highway early in the afternoon and there were a number of prospective buyers also eagerly awaiting a turn. One lady had driven over four hours just for her chance to see the FUV in person and take a short test drive.

I hung around to get an idea of what kind of crowd might be interested in this particular electric trike and found the mix to be quite eclectic. One retired couple thought it might be ideal for getting around their property; a young, professional husband and wife saw it as a replacement for one of their cars. Most were quite enthusiastic — more so after their drives.

If all goes according to plan, plenty more people will have an even better opportunity to try this Fun Utility Vehicle for themselves. The company is pursuing a business model that would see the trikes available as rental vehicles at vacation destinations. The hope is that their experience would be positive enough for them to consider picking one up for their personal use back home. Arcimoto has already opened its first rental center in Eugene, Oregon. Its next location should be open soon in the San Diego, California area.

This writer would certainly be quite happy to get some more FUV love. Already I'm daydreaming about the future possibility of renting one to explore the Florida Keys, a locale I think would be perfect for a rental center. Even without being able to legally reach it 80-mph top speed (the maximum limit there is 55 mph.), its open cabin allows you to fully embrace the entirety of the experience.

The production version of the FUV should be revealed soon. We expect it to be pretty much the same, though with a couple more lights integrated into the fascia and more overall refinement. Then, the job of building and satisfying a few thousand existing orders begins.

With its strong accent on the "Fun" part of its acronym, this three-wheeler should pull in plenty of buyers. It's truly unlike anything else on the road today and definitely gets peoples attention as you pass them on the road. The base version starts at $11,900, and there are a number of options to help tailor it to your needs.

Super-efficient, it comes with a 12-kWh battery said to offer 70 miles of range, but can be upgraded to a 130-mile pack. There are also optional enclosures (doors, basically), a storage box for the back, as well as bolt-on brackets to accommodate surfboard, bicycles, or golf bags. Arcimoto continues to accept refundable $100 deposits for pre-orders on its website.

Gallery: We Have Luv For The Arcimoto FUV