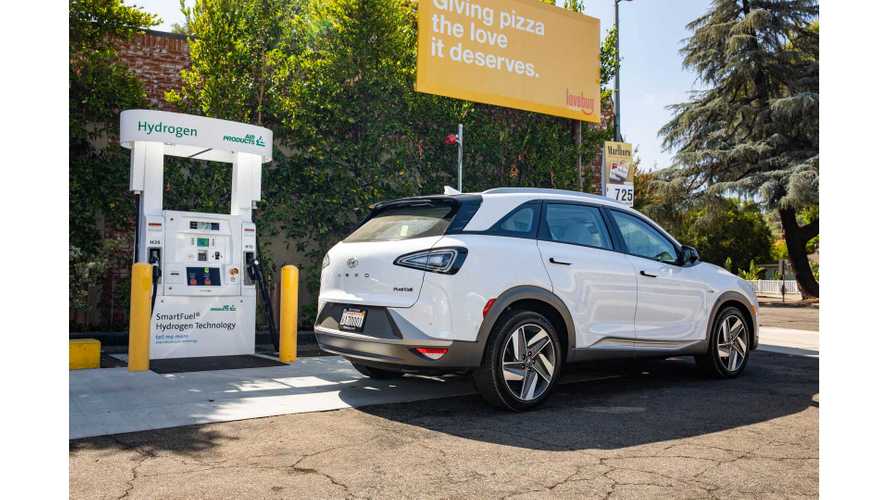 Hydrogen is the most abundant element in the universe. Too bad it's so difficult and expensive to get it into your fuel tank.

That wasn’t because I hate fuel cell vehicles, because I don’t. I just have a hard time believing that they will ever be as efficient and as convenient as pure electric cars, and I really don’t think we’ll ever have enough infrastructure installed to make them a real viable alternative. Plus, I have been anxiously waiting to get behind the wheel of a Kona Electric, as I have been planning on getting one myself.

As the press event worked out, Hyundai arranged for all of us to have equal time behind the wheel of both vehicles; there wasn’t really any way to get around it. Half the day would be in a Nexo Fuel Cell, and the other half in a Kona Electric. I elected to take the Nexo first, and have the second half of the day with the Kona.

The Hyundai Nexo has a self parking option, demonstrated here by a Hyundai representative

The planned route took us from our hotel through bumper to bumper Los Angeles city traffic for a while, before a stint on the highway, and finally ending up on the winding roads of Topanga Canyon. The Nexo isn’t a quick vehicle, and actually seemed a little slower than Hyundai’s claimed 0-60 time of 9.2 seconds. The Nexo weighs between 3,990 and 4,116 pounds depending on trim, and the motor's 161 horsepower and 291 pound-feet of torque are adequate while driving around town, but definitely underwhelming at higher speeds.

There really isn’t much oomph at highway speeds when you punch the accelerator, and I asked Dr. Bo Ki Hong, a fuel-cell specialist for Hyundai who was riding along with me in the Nexo, if they could improve the performance. He said that it would be “challenging” to get much more power delivery. It is worth to note that Hyundai did improve the performance of the Nexo over their previous hydrogen-powered offering, the Tucson Fuel Cell. The Tucson needed a full twelve seconds to reach 60 mph.

But it’s not all bad news for the Nexo. Besides the mediocre power, the Nexo is actually a real pleasure to drive. The seats were very comfortable, and I really loved the instrumentation as well as the center console. The driver's display and the center display screens are connected into one unit, even though they work as two independent screens. I liked the layout, both for display and aesthetics.

It actually felt like I was driving a vehicle from high-end premium manufacturer. To reduce noise, Hyundai used triple-layer noise-reducing glass on the windshield and front windows, and the result is a serene cabin experience. The journalist I was partnered with felt the same way and said Hyundai should rename it the “Chill,” because it was so smooth, quiet and comfortable. The handling was compromised by the low-rolling resistance tires, but the vehicle exhibited very little body-roll and took the winding mountain roads of Topanga Canyon well.

Hyundai was also able to lower the rear floor of the Nexo as compared to the Tucson by using three smaller Hydrogen tanks, instead of the two larger ones in the Tucson. Two of the tanks are under the rear seat, and one is under the load bay. The Nexo utilized a 1.56-kilowatt-hour battery pack, and can store 6.33 kg (13.8 gallons) of hydrogen.

If I were in the market for a Hydrogen fuel cell vehicle, I believe this would be my choice – by a wide margin over the Toyota Mirai or Honda Clarity, both of which I’ve had the opportunity to ride in. The ride quality, comfort, luxury and utility of a CUV make the Nexo the clear fuel cell winner in my book. It's worlds better than Hyundai's previous fuel cell offering, the Tucson. The Nexo also has a longer range than the fuel cell offerings from Toyota and Honda, with 380 miles of range compared to 312 for the Mirai and 366 for the Clarity. But the 380 miles of range is only possible with the base trim called “Blue.”  The “limited” trim adds weight and larger wheels which reduces the range to 354 miles.

The Nexo interior is spacious and has a premium feel

But that only matters if you can find a hydrogen refueling station, of which there aren’t many. California now has 35 operating hydrogen stations, and that’s pretty much the only place in the country where there are H2 stations available to the public. That’s OK since the Nexo will only be available in California. We even had the opportunity to visit an H2 station and refuel a Nexo. The cost of the Hydrogen at this station was $17.50/kg. That means refueling an empty Nexo would cost $110 which divides out to a fuel cost of 29 cents per mile. That's about three times more than a comparable efficient gasoline crossover would cost to fuel and between five and ten times more than the Kona Electric would cost to recharge, depending on where you live.

To offset the high cost of Hydrogen, Hyundai is giving Nexo owners a credit card that gives them $5,000 of free Hydrogen. Both Toyota and Honda have similar hydrogen subsidy programs for their fuel cell customers. Hyundai hasn't released pricing for the Nexo, but it is expected to be about $55,000, making it a tough sell when you consider the competition in that price range.

This is the real reason why I’m not so high on hydrogen fuel cell vehicles. I’d really like to believe they have a future as a piece of the puzzle to move the world off of fossil fuels, but I just don’t see how they can compete with pure electric cars in the long run. When we were at the Hydrogen refueling station, I looked at the truck delivering the H2, the storage tanks they were pumping it into, then the piping that took the H2 to another smaller storage tank, then more piping to bring it to the pump. Then I thought about my home solar array and how I just plug my car in, and the electricity made by sunlight trickles into my battery. The thought of that made the H2 station look like a crazy Rube Goldberg device of inefficiency. Maybe that will change some day.