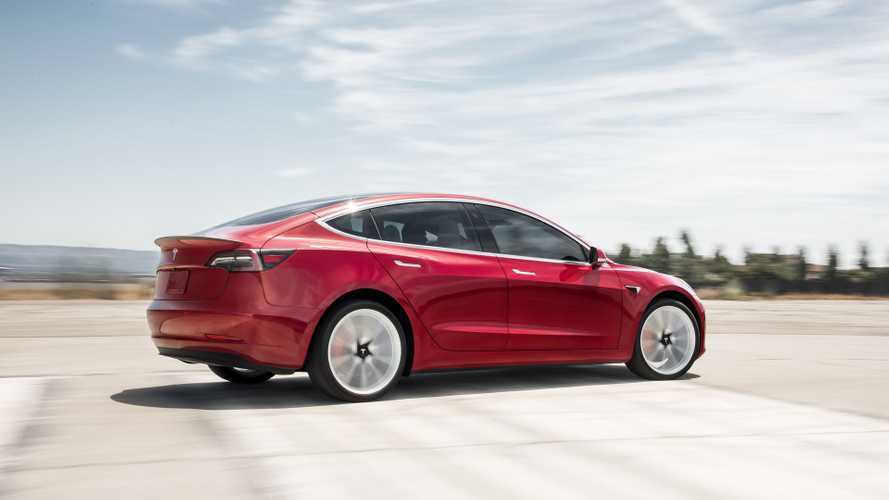 Tesla’s vehicles have earned rave reviews from just about every major automotive authority. However, there are plenty of car guys (and, presumably, gals) out there who still haven’t warmed up to a Tesla, or any electric vehicle. Some petrol-heads of this persuasion are to be found at Top Gear, the UK car guys that famously fought it out in the courtroom with Tesla back in 2008 (as told in a certain book). “As much as we admire BEVs, not one has yet landed that genuinely stirs the emotions like our old friend internal combustion,” writes Top Gear’s Jason Barlow in a recent article.

However, if any EV is going to win these blokes over, it might just be the new Dual Motor Performance Model 3. Three versions of Model 3 are currently available in the US: Long Range Rear Wheel, Long Range Dual Motor and Performance. The latter features an AC induction motor in the front and a partially permanent magnet motor with silicon carbide inverters in the rear. One of the motors is there for performance, and the other is there primarily to extend range. According to Tesla, the Performance version “creates a more aggressive and playful driving experience, both on the road and on the track.”

Top Gear was recently chosen to take a Model 3 Performance to Monterey Car Week (a sure sign that past disagreements are long forgotten). In this “ocean of automotive pulchritude,” where Bugattis, Ferraris, Porsches and McLarens were thick on the ground, “the Model 3 felt great, perfectly at home.”

Surprisingly, the traditionalists of Top Gear praised Model 3’s touchscreen paradigm: “Once you’ve acclimatised to the minimalist interior, you can’t help wondering why all cars aren’t designed this way. Whatever in-car feng shui is called, the Model 3 has it...The touchscreen is now a doddle to use, with the key functions located closer to the driver on the screen, and the connectivity is instant, in California at least. The whole effect is enlightening and positively therapeutic.”

Above: A look at the all-white interior available with the Tesla Model 3 Performance variant (Image: Tesla)

Here’s a sure sign that Tesla is making progress on its much-publicized build quality issues. “The Model 3 feels perfectly well put together,” says Top Gear. “Still some way shy of an Audi, BMW, Mercedes or Lexus, but way better than expected. I dislike the pop-out exterior door handles, and the doors themselves don’t shut with a Teutonic thump, but overall quality is good. Certainly good enough. Hmm. Maybe Tesla is hand-building its test cars like some Italian supercar companies are rumoured to do.”

But of course, we know what the lads at Top Gear really care about. Here’s what they had to say about the performance of the Performance: “It’ll do 60 mph in 3.5 seconds. Power output is equivalent to approximately 450 bhp (versus 271 for the standard car and 346 for the Dual Motor), with 471 torques. In the US, Tesla claims a 310-mile range (EPA). The suspension has been lowered by 10 mm, but the bump stops are engaged earlier to protect the ride. Tesla has also been working hard on its Vehicle Dynamics Controller (VDC), to refine the integration sweet spot between powertrain and traction and stability controls. The regenerative braking set-up is largely unchanged but Tesla can do more with the regen harvest as the car’s potential is further exploited.”

“As ever, given the instantaneous torque whump you get in an EV, its acceleration from a standing start is awesome,” Mr. Barlow continues. “Stamp on the fast pedal, and the interior atmosphere suddenly becomes rather less therapeutic. But the big story here is the way it handles. One of Tesla’s engineers described the Model 3 to me as being effectively mid-engined, with the resultant lower polar moment of inertia. Its centre of gravity is pretty good, too. So you really can hustle it, its body control is fine (despite its 1,800 kg-plus weight), its steering feels good enough and arguably superior to a lot of electric set-ups. Look, it’s not as much fun in absolute terms simply because changing gear - even via software-attenuated flappy paddles - is still core to the fun. Then there’s the issue of sound, of which the Model 3 makes little beyond the customary whir, overlaid by wind rush and tyre thrum as you gather momentum. Altogether, though, this is a satisfying way to get around. Deeply satisfying, in fact, when you include the zero emissions hygiene factor, and the promise of regular ‘over-the-air’ updates.”

Barlow and his boys didn’t just cruise the strip in the Model 3, admiring its high-tech gadgets - they took it to the track to test out the new Track Mode. At Pebble Beach, they drove the new EV on a course specially designed to show off its handling. “We’re talking sudden high-speed lane changes, slaloms, hard braking, and yes, drifting.”

“No one ever bought a Tesla for pure driving kicks,” writes Barlow. “Not until now, anyway. The Model 3 isn’t just the Tesla that turns the company into a genuine volume player...it’s also the one that aims to stick it to the likes of the BMW 3 Series and Mercedes C-Class for driving dynamics, which is where the new Track Mode comes in.”

According to Tesla, Track Mode brings a bit of Roadster handling to the Model 3. “Since the introduction of the Tesla Roadster, we’ve exploited the immediate availability of motor power and torque to achieve unprecedented straight-line performance, making the car’s forward acceleration a pure extension of the driver,” says Tesla. “With Track Mode, our goal was simple: use that same motor power and torque to make cornering feel just as natural as forward acceleration.”

Above: Cornering in a Tesla Model 3 (Image: Tesla)

The Top Gear lads were keen to check it out: “Yes, the supercar-shaming, instant-torque jowl-flapping acceleration the Model S in Ludicrous mode delivers is one hell of a party trick. But we like going round corners quickly, too, and the S and X are frankly a bit lumpen. So Tesla’s engineers have been beavering away on vectoring the dual motors’ torque and using brake force to sharpen the Model 3’s cornering. It’s nothing new, but what is interesting is that they’ve developed their own Vehicle Dynamics Controller, and all the software is in-house. Virtually every other car maker uses systems developed by a Tier 1 supplier, and then tweaks the software accordingly. Even Ferrari. Tesla didn’t think it could achieve the level of integration it wanted, so it’s a lone wolf. Well if anyone can write their own code, it’s these guys, right?”

Top Gear is famous for pushing performance cars to (or even past) their limits, and that’s just what they did. “Delve into the touchscreen menus and engage Track Mode. That’s it. The VDC monitors all driver inputs and the vehicle’s state, and divvies up the torque front to rear. As with any fast car, it takes time to dial into it, and the slip angles are in direct proportion to the size of your cojones, but it’s worth reiterating: Track Mode allows you to do it. Give it the berries on the way out of one corner and into another, and yep, we’re sideways. On the next run we’re drifting. Towards the end, you can even get it rotating with a Scandinavian flick. Track Mode also increases the amount of regenerative braking. Tesla says it improves the endurance of the system, sends more energy back into the battery, and helps it unleash the maximum amount of power. The VDC also uses it to temper rotation when you come off the brake pedal.”

While Barlow and the Top Gear team may not be ready to abandon petroleum just yet, it sounds like Model 3’s Track Mode has them feeling a lot better about the coming transition to electrons. “Me, I miss the noise, and changing gear, as ancient a concept as it might seem, is still key to the experience,” Barlow concludes. “But hey, it’s 2018, and the world is moving on.”