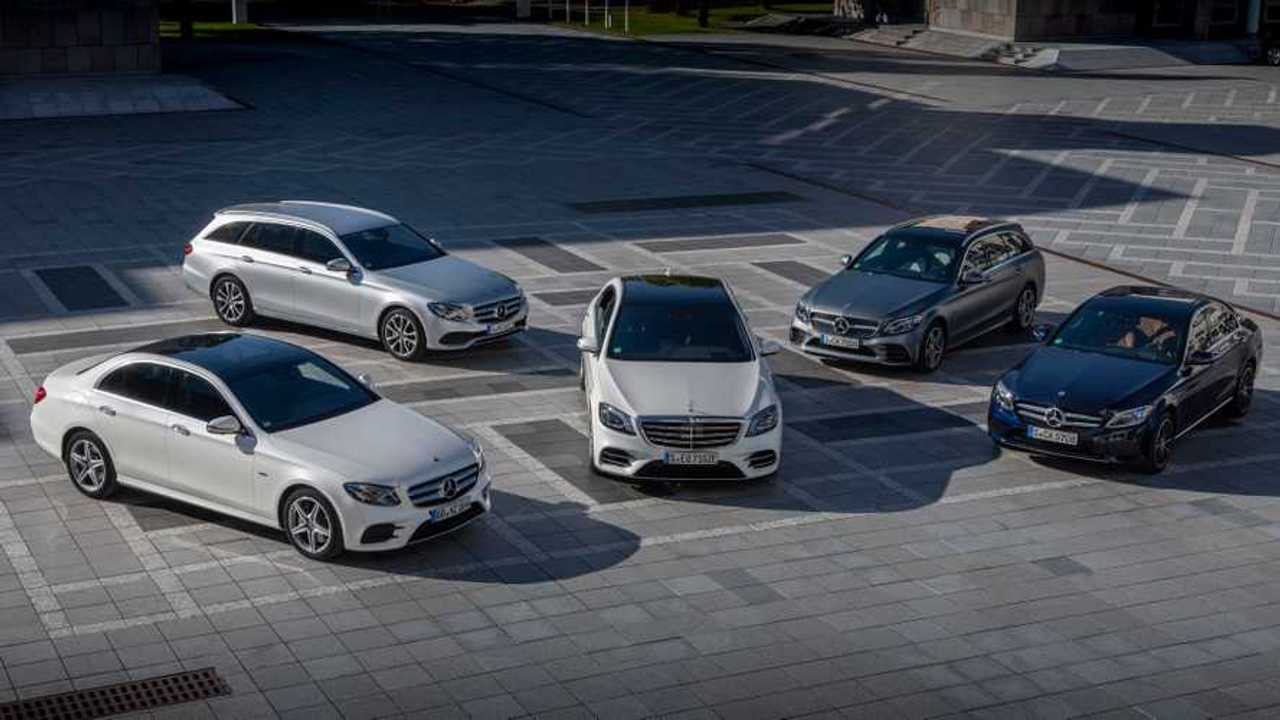 Mercedes-Benz introduces a new generation of plug-in hybrids of three models signed "EQ Power": C-Class, E-Class and S-Class, equipped with higher capacity batteries (13.5 kWh packs), 90 kW electric motor, 9G-TRONIC 9-speed hybrid transmission and depending on the version, gasoline (e) or diesel engines (de). The upgrade from the previous generation will enable it to achieve higher all-electric range (of at least 50 km (31 miles) under NEDC) and lower average CO2 emission, which is important from a regulation standpoint after the move from NEDC to WLTP. Also, the performance across the board is slightly better - for example, the S 560 e can do 0-100 km/h (62 mph) in 5.0 seconds.

"The Mercedes-Benz C 300 de as Saloon or Estate (combined fuel consumption 1.6 l/100 km, combined CO2 emissions 42 g/km, combined electrical consumption 19.1-18.7 kWh/100 km)2 is a particularly dynamic example of third-generation plug-in-hybrid technology from Mercedes-Benz. It is combined with the highly sophisticated OM 654 four-cylinder diesel engine for the first time in the C-Class. The system output is 225 kW/306 hp. The result is a vehicle that can cover a distance of up to 57 km (NEDC) on electric power alone with zero local emissions. What's more, the combination of diesel engine and electric motor offers outstanding motoring comfort, exceptional pulling power and high efficiency thanks to the 9G-TRONIC 9-speed hybrid transmission. Delivery of the first models is scheduled for mid-2019.

The Mercedes-Benz S 560 e (combined fuel consumption 2.6-2.5 l/100 km, combined CO2 emissions 59-57 g/km, combined electrical consumption 20.2-20.0 kWh/100 km)2 was the first model in which the technology of the current plug-in-hybrid generation made its debut. The modified components and the intelligent powertrain management's new anticipatory functions give the customer enhanced electric performance and, last but not least, added convenience thanks to faster charging times. The efficiency of the 9G-TRONIC plug-in-hybrid transmission and a new lithium-ion battery in the luxury saloon are good for an all-electric range of up to 50 kilometres in the NEDC. The hybrid drive system in the S 560 e combines the 270 kW (367 hp) of the V6 petrol engine with 90 kW of EQ Power."

The technical data for the plug-in-hybrid models at a glance:

2 The stated figures were determined in accordance with the prescribed measuring method. These are the "NEDC CO2 figures" according to Art. 2 No. 1 Implementing Regulation (EU) 2017/1153. The fuel consumption figures were calculated based on these figures.

3 Figures for fuel consumption, electrical consumption and CO2 emissions are provisional and were determined by the technical service for the certification process in accordance with the WLTP test method and correlated into NEDC figures. The EC type approval and a certificate of conformity with official figures are not yet available. Differences between the stated figures and the official figures are possible.