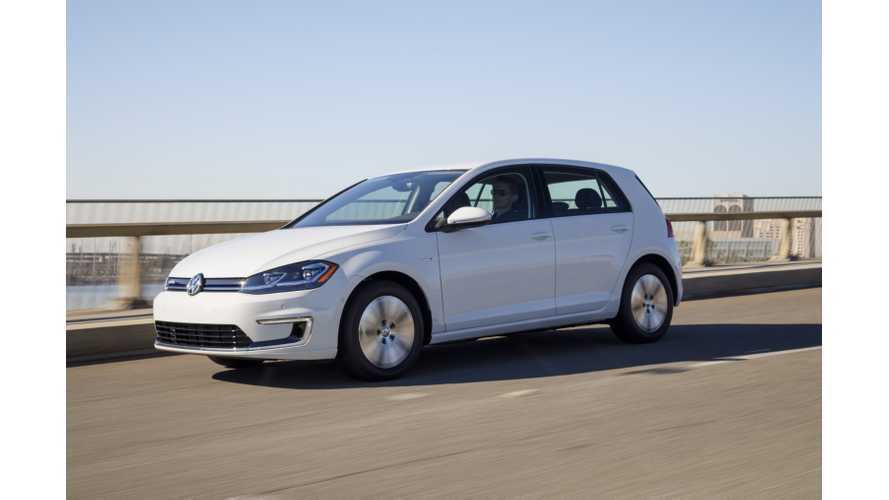 The e-Golf has a maximum range of 186 miles, and is even easier to drive than a normal Golf. And it looks reassuringly normal in every way.

The Volkswagen Golf is about the most reassuringly normal car going. You know what you're getting, and you know it's a safe option in a car market increasingly muddied with SUV-like alternatives and more extreme-looking rivals. The pure electric Golf, or the e-Golf, is just as reassuringly normal in the electric car class.

Did you know? The e-Golf does 186 miles officially, but a Nissan Leaf will do 235 miles. If occasional long distance journeys are a concern for you, don't forget to consider plug-in hybrid alternatives like the VW Golf GTE, Hyundai Ioniq and BMW i3 range extender.
VERDICT7.0 / 10

The VW e-Golf is instantly likeable. It's so effortless to drive - from the eery linear acceleration, calm refinement and well-judged adjustable regenerative braking - that it takes almost no brain power at all to drive. Plus, being one of the most understated electric cars, it'll suit anyone who doesn't want the extrovert styling often associated with EVs - as demonstrated by the futuristic BMW i3 and Renault Zoe.

The problem is that it's substantially more expensive than a Nissan Leaf on monthly finance or when buying outright, and when a high-spec 1.5 TSI Golf SE Nav is some £100 cheaper on monthly finance it's hard not to be tempted by the less complicated ownership prospect of a petrol or diesel alternative. You have to be doing quite a few miles in your e-Golf to make that back in fuel savings, which is a bit perverse given that most electric car owners do low mileage... Ultimately, the e-Golf is an excellent electric car, but an expensive one. Do your maths very carefully before you commit to it. Company car buyers, however, can feel totally smug knowing that this is a fantastically affordable company motor.

The e-Golf’s design is certainly a safe one, but it’s got the sort of appealing familiarity and classless, any-occasion appropriateness as a well-pressed shirt. Simple? Yes, but excellent also. The e-Golf actually gets a lot of styling cues from the sportier GT models. It's easy to tell apart from the standard Golf models by the blue contrast line and headlight accents, the bespoke alloy design (compulsory on the e-Golf) which helps with aerodynamics, and the striking LED daytime running light design. You also get fully LED headlights as standard.

The e-Golf’s dash is dominated by its 8.0in touchscreen, through which you control the vast majority of the car’s functions. It’s easy to see and doesn’t suffer too much glare, while the straightforward rotary air-con controls beneath it make adjusting the temperature (all cars get air-con).

It's only really the dials the differentiate the e-Golf from its petrol and diesel counterparts. Our test car had the optional £495 Active Info Display - which the rest of us would call a fully digital readout. We'd recommend you do add this if you can, as it helps to make the Golf feel much more modern, and it offers a variety of readout styles and an array of information - albeit without the variety of views that you get in an Audi A3 with the Virtual Cockpit (the same tech but tweaked for Audi's purposes).

The e-Golf has a simple battery charge and range remaining readout, plus an instant readout for how much energy you're using, which will inevitably encourage you to stick the car in Eco or Eco+ and take things gently.

Sure, the Golf feels a bit grey and drab - which is a shame in such an expensive variant of the Golf - but there is loads of equipment including adaptive cruise control, dual-zone climate control, autonomous emergency braking, the full bells-and-whistles media system, and front and rear parking sensors amongst other nifty standard features.

You also get adjustable lumbar support for the front seats, which - along with a fairly supportive seat and a lovely, slim steering wheel - helps to make this a really comfortable driving position.

That boxy body shape and slim pillars means that the Golf has got just about the best all-round visibility in the class.

The e-Golf is only available with five doors, and there's plenty of room up front even for leggy drivers, while two adults will be fine in the back thanks to a high roof and decent legroom. Sure, the rear seat bench is a bit flat and firm, and a middle passenger will be tight for foot- and elbowroom, but the Golf is still one of the brightest and most comfortable cars for rear passengers in this class.

The seats fold flat easily in a 60/40 split, and you get some hidden storage beneath the boot floor, although the e-Golf does sacrifice a little of its boot space to its batteries, coming in at 341 litres compared to the standard Golf hatchback's 380 litres, or the Nissan Leaf's 370 litres. The VW’s well-shaped, sizeable boot is impressively practicality but it is compromised in the e-Golf, more by the two chunky cable bags that will be rattling around in there all the time rather than by the space eaten up by batteries.

The e-Golf gets the top-spec Discover Pro Navigation system as standard, which means a huge touchscreen that pings up bigger icons and menu options as it senses your hand getting closer. DAB radio, USB input, Bluetooth handsfree and audio streaming, voice control, the ability to connect two mobile phones simultaneously, a healthy 8 speaker sound system, Apple CarPlay and Android Auto are also standard.

Not only that, but the system will show you the nearest chargers and what level of charger it is, although we'd still rate live information sites like zap-map.com as better for giving real-time charger info, including whether the charger is in use or out of order.

Regardless, this is one of the best infotainment systems going. The graphics and contrast is crisp and bright, the menus are generally quite logical and there's all the functionality you could want as standard. We just wish it wasn't such a laborious process to put a postcode in, is all, and sometimes it's tricky to hit the icons precisely when you're driving.

The e-Golf delivers 134bhp, and will do 0-62mph in 9.6sec, but it actually feels faster than that suggests in the low-end sprint up to 30- or 40mph, since the single ratio, direct drive powertrain means there's no hesitation for gearchanges and the substantial torque is delivered instantly. It makes the e-Golf (and most other electric cars) feel seriously punchy if you give it everything off the line, and you can actually spin up the low rolling-resistance tyres quite easily.

Doing that will drop your electric range by quite a chunk, though, so you probably won't be tempted too often. More likely you'll have it in Eco or Eco+ and will be surfing along enjoying the outstanding refinement and easily modulated controls. The e-Golf is just effortless to drive smoothly, partly thanks to the fairly well-judged brake feel, which is often an issue with cars that use regenerative braking to increase battery charge as the e-Golf does. Here, you can vary the regenerative braking force by nudging the gearstick, or if you don't need that extra energy to extend your range then there's very little regenerative braking at all so it feels much like a normal car in terms of its engine braking and brake pedal feel.

This is a seriously comfortable electric car. VW has managed the extra weight of the batteries really well, so the e-Golf turns into corners in a neutral, grippy and unflappable fashion, with easily predicted steering response and weight, and body roll is well contained, too.  Ride comfort is soft enough without feeling wallowy, so overall the e-Golf is an absolute peach to drive.

The e-Golf hasn't been tested by Euro NCAP, although the standard car has been and got the full five stars  - albeit under less stringent tests than were introduced in recent years and when tested with the standard model.

An alarm is standard, too, but the odd thing is that you have to pay £290 extra for front side airbags up front and a curtain airbag - standard on normal Golfs. The driver's knee airbag is also missing in the e-Golf that you get in normal Golf models.

Blind spot and lane-assist are optional, as are even more high-end safety aids, and it's a shame that traffic sign recognition is part of the lane-assist option, meaning you have to pay £530 to get it.

The color palette is a fairly subdued one for the e-Golf. The flat white paint, costing £285, looks great as it highlights the signature blue highlights on the e-Golf, or £570 Atlantic Blue is a bright blue that looks really good. The only standard color is the rather boring Urano Grey.

The e-Golf is a trim in its own right, and it comes with almost everything you could want including auto lights and wipes, LED headlights, adaptive cruise control, the full gamut of smartphone connectivity, nav and media functions and climate control. The things you may still want to add include the £400 Winter Pack, which brings heated seats and washer nozzles, and a headlight washer system, keyless entry and go is £375, and those aforementioned airbags are another £290. Plus the optional paint you'll want, you're looking at four figures for your options, realistically.

The e-Golf will do 186 miles on the very best day, but do bear in mind that doing motorway speeds will eat up the charge faster than driving around town, so doing a highway journey will probably see you needing a charge after around 100 - 120 miles in the real world, especially if you've got to have air-con, wipers and/or headlights on. All that ancillary stuff will use up the battery charge faster, but if you put the e-Golf in Eco+ mode and up the brake regeneration (by nudging the gearstick side-to-side), that'll help to extend your range.

Find a 40kW fast charger (normally on the motorway or central big cities), and you can get 80% charge in 30 minutes. A standard domestic three-point plug will charge the e-Golf in 13 hours and you do get the necessary cable to do that as standard, as well as the cable needed for fast chargers etc. Most e-Golf buyers with a driveway will also want the wall-mounted charger offered by VW, which will deliver a full charge in around 8 hours.

If range is a real concern and you do occasional long journeys you should consider a range-extender instead, such as the VW Golf GTE. This’ll do around 25 miles on electricity alone before the 1.4 TSI engine kicks in. It’s one of the better plug-in hybrid hatchbacks around, which switches between engines or uses both very effectively, and is usefully quick in outright acceleration, but wait times are very long as demand is so high, and it's even more expensive than the e-Golf.

Reliability is tricky to comment on, but the reality is that electric motors have far fewer moving parts and are generally much simpler than combustion engines so there's just a lot less to go wrong.

The VW e-Golf is fairly expensive by comparison to the Nissan Leaf that is its main rival. Put down a £3000 deposit on a three year PCP finance contract with a 10,000 mile limit and it'll cost you around £450 per month. For context, a high-spec Nissan Leaf will be about £50 less per month on those terms, or an automatic Golf SE Navigation 1.5 TSI is about £100 per month cheaper – and that’d buy you a useful amount of fuel.

There's no battery leasing option to reduce the purchase cost of the Golf, so you're paying over £28,000 even after the £4500 government grant. Keep in mind that a full charge can cost around £2-£3 depending on your utility tariff, and do your maths carefully if you're looking at the e-Golf in order to save yourself some cash. The reality is that, given the high purchase costs, a standard petrol or diesel alternative might actually be cheaper despite fuel costs.