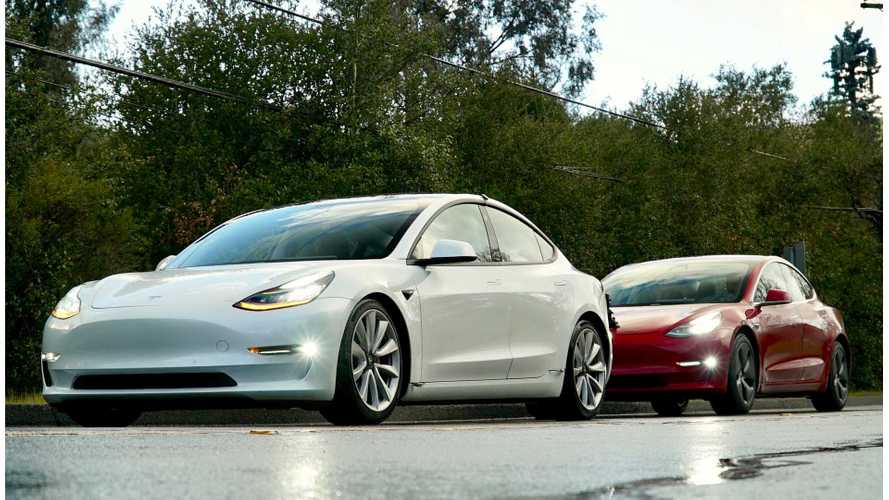 Top Gear has had a rocky past with Tesla. However, when given the chance to review the Model 3, Top Gear reports, "Everything Tesla has done up to this point has been building towards the Model 3... and it's been worth it." Why? It turns out, "There’s a refreshing simplicity to the proposition and a frisson of excitement inside and outside the car, wherever it goes."

Above: Top Gear notes, "an odd sensation being papped and pointed at... the public are fascinated by the 3" (Instagram: detti97)

Performance is paramount in any Top Gear review. And it's reported that "the Model 3 never feels anything less than enthusiastically fast... the whole car feels tight, alert and moves as one solid unit. Add to this the fact the battery pack is in the floor pan, which gives the 3 an unusually low centre of gravity, and there’s (whisper it) actual fun to be had here."

Check This Out - Tesla Model 3 Teardown

Cornering was a definite highlight: "On fast, sweeping corners keep your inputs smooth, your foot away from the brake pedal and you can hustle it at quite hilarious speeds ... The sensation is firmness, but well damped firmness, much like the sporty German saloons it’s looking to eradicate, but there’s purpose to its tautness – the chassis feels properly developed."

Above: A look at the lines of the Tesla Model 3 at night (Instagram: detti97)

Were there downsides? Top Gear admits, "it’s not perfect... the Autopilot function is a work in progress and while slick, the decision to put everything on one touch screen can be distracting when you’re on the move." And while many Model S and X owners get free supercharging from Tesla, "superchargers are no longer free" for Model 3 owners.

Then there's the elephant in the room. With a wait list of nearly half a million reservation holders, will Tesla's production delays exceed people's patience? Top Gear notes, "Tesla’s production woes are well documented, the waiting list is daunting... we admit, coverage of Tesla can get a bit frenzied, at times it’s more like a cult than a car company, but credit where it’s due, the Model 3 is a convincing product. Let’s hope Tesla can build enough of them to make it stick."

Above: Model 3 at one of Tesla's newer urban charging stations (Instagram: stylee_zee)

The verdict? Top Gear concludes, "Tesla’s Model T moment is a triumph... the way it drives is genuinely satisfying, certainly more so than the Model S despite being several yards slower." That said, "Does it have the desirability to drag not just early adopters and tree-hugging environmentalists out of their petrol and diesel fueled cars, but the wider public too? The answer is a surprisingly emphatic yes, and that’s because beyond the hype is a truly well-engineered car."