It's been quite some time since last time we updated our comprehensive price comparison guide for plug-in electric cars in the U.S. - so let's examine what has been going on in this hot plugged-in segment. 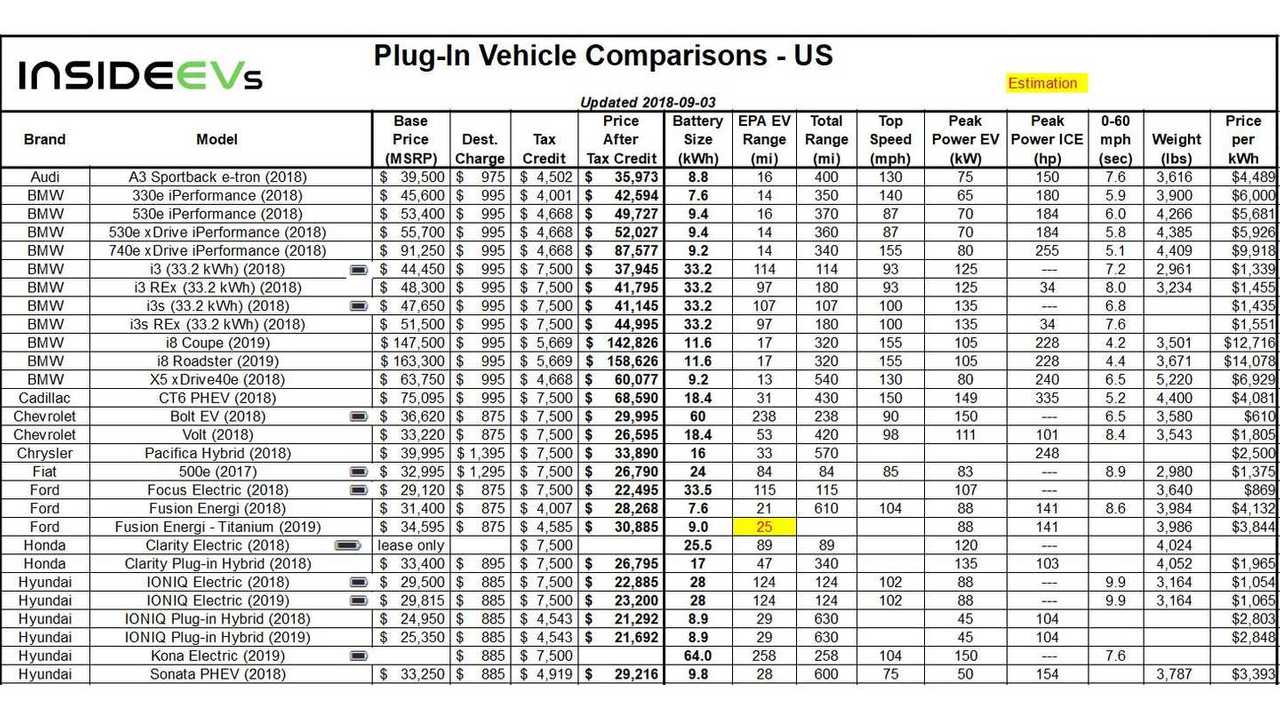 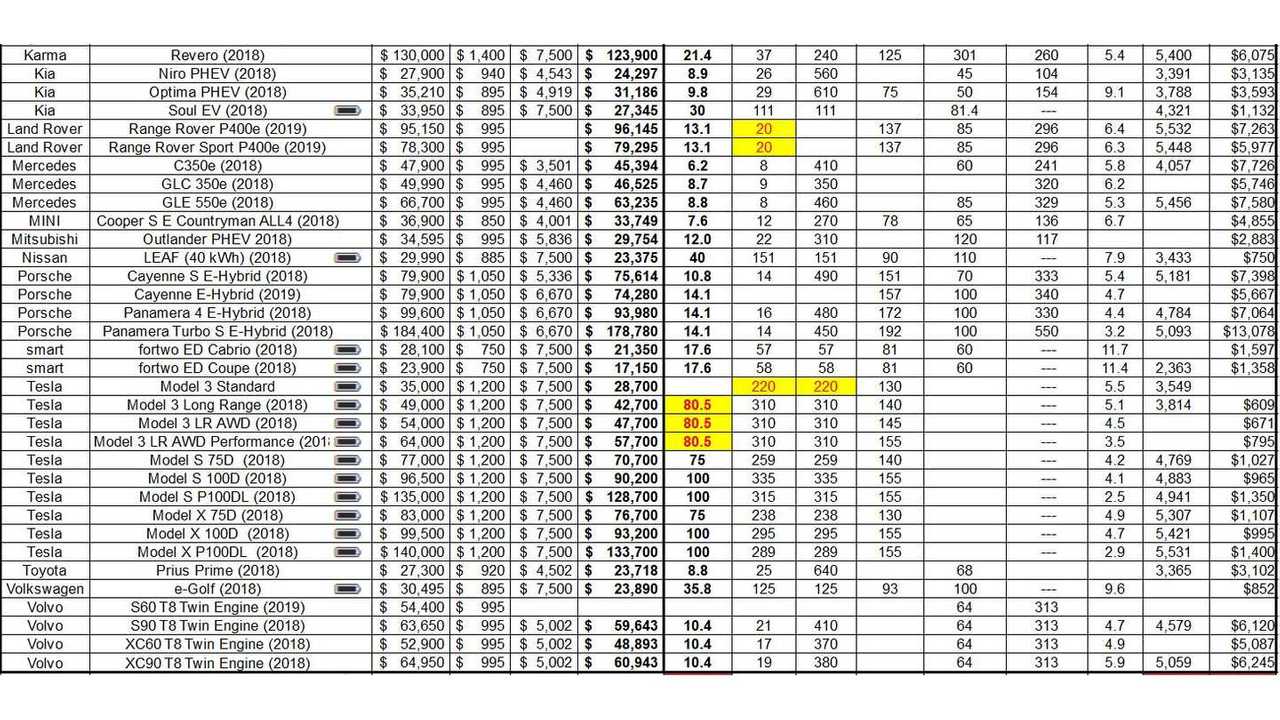 ***UPDATED September 2018 (Note: Two individual images uploaded above. Click each one for an enlarged and much clearer version.)

For starters, there are a lot more mainstream plug-ins. We listed more than 50, counting battery or powertrain versions separately.

Some cars are new, others are updated, and several have disappeared. Some will be gone soon, but we left them in for now for the sake of comparison. Others will arrive soon (Model 3 Standard...we hope).

Some of the new models are the updated BMW i3s and i8, new Nissan LEAF, Volvo S90 T8, Mitsubishi Outlander PHEV and Kia Niro PHEV.

Below you will find graphic tallies and infographics for all plug-ins. We've also taken the time to split out plug-in hybrids and all-electric vehicles. We hope this is helpful.

Let’s begin with a comparison of all plug-in models – ordered by net price (the base MSRP with included destination charge, less the federal tax credit).

Effective prices vary from $17,150 for the electric smart, through $178,780 for the top Porsche PHEV version. The Honda Clarity Electric is available only for lease. 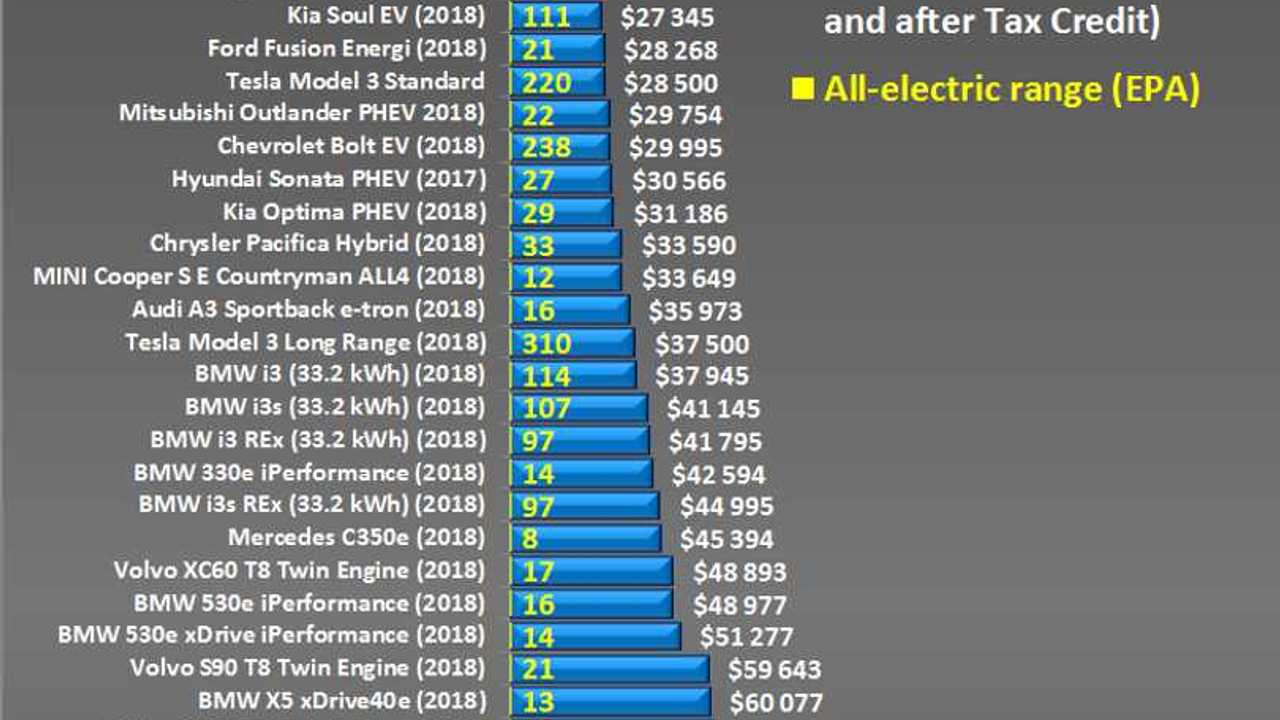 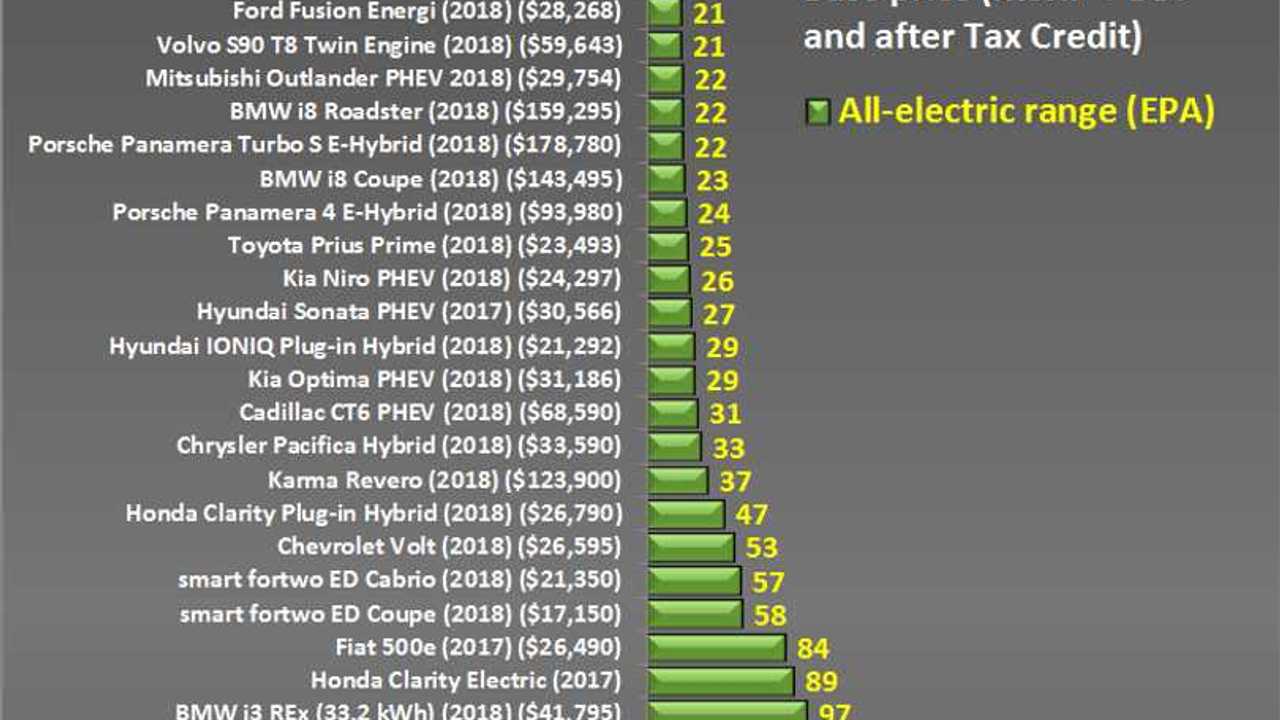 Here we have two graphs featuring the 20 all-electric only models.

As you can see, there is a big jump from the first group of BEVs with a range of up to 125 miles and the second group of long-range models that consist of top Tesla models, and the new generation of more affordable BEVs (Tesla Model 3 and Chevrolet Bolt EV). The new Nissan LEAF, with 151 miles of range, tries to bridge the gap. 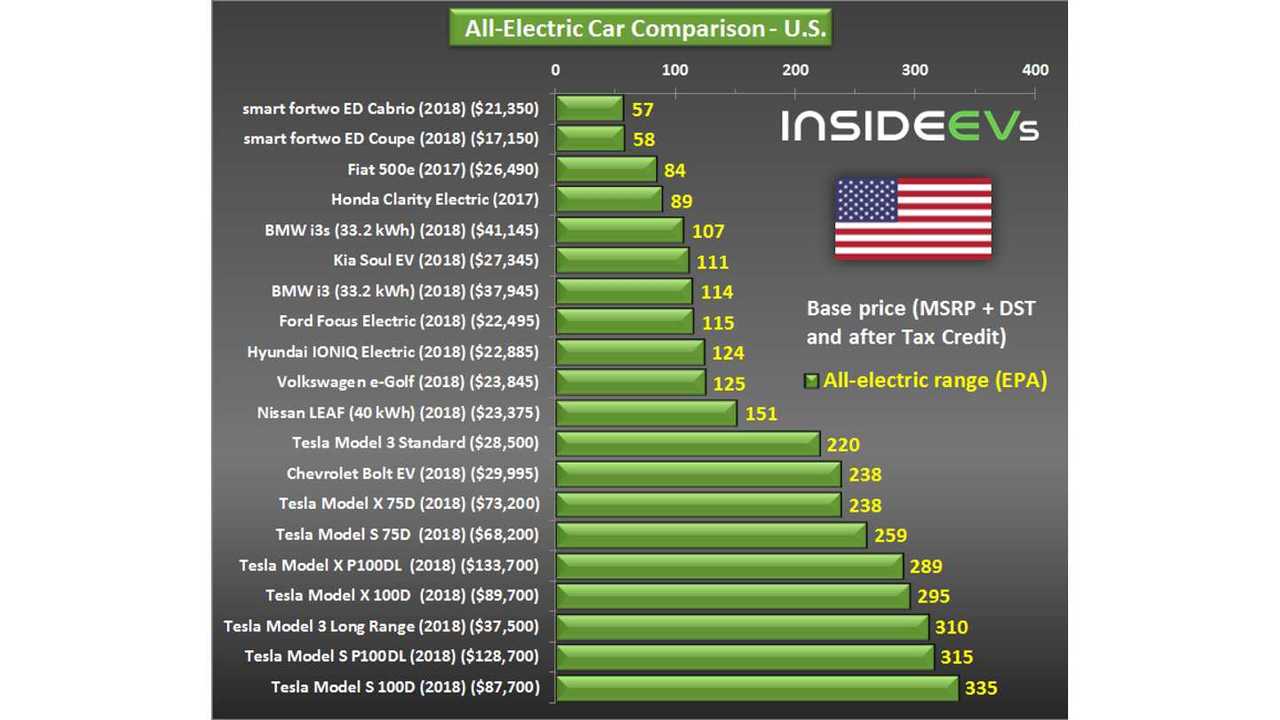 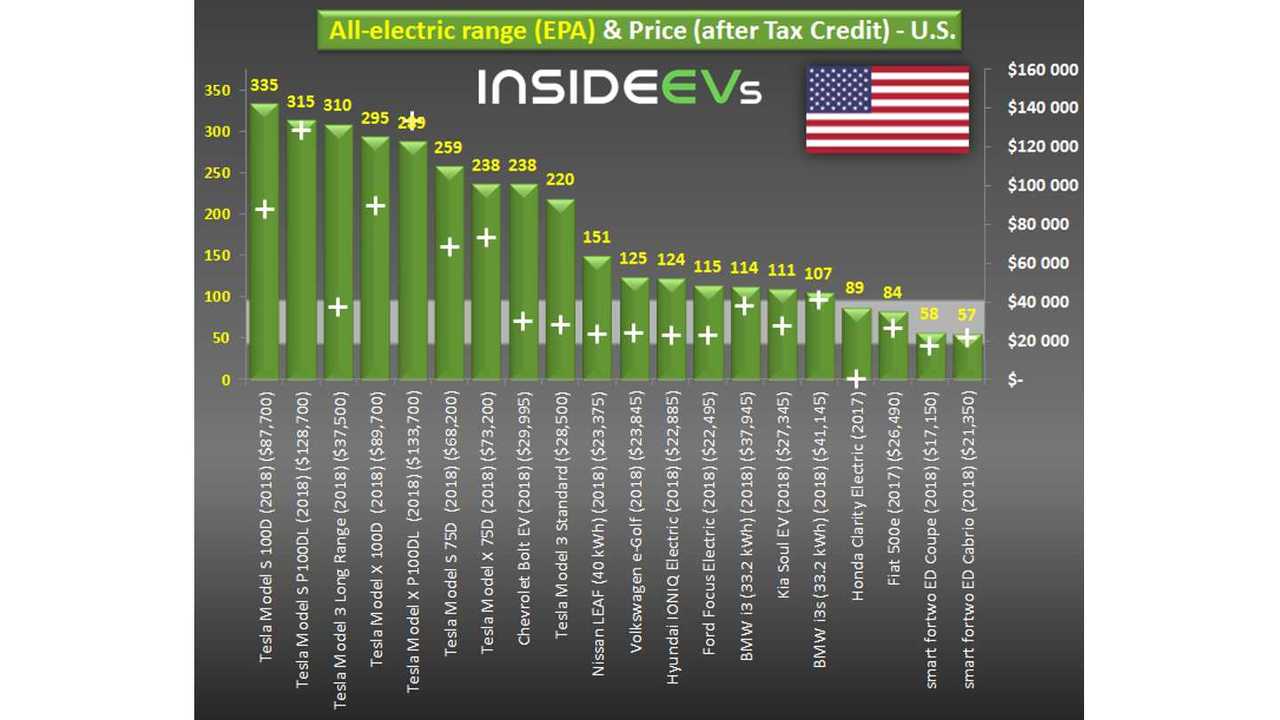 Now it’s time for the 33 models that are equipped with an ICE in any configuration.

The Honda Clarity Plug-In Hybrid, which is rated at a strong (for the segment) 42 miles, is now the #7 best selling plug-in after the first two months of 2018 and 3rd among PHEVs. The other strong contender is the Chrysler Pacifica Hybrid minivan, rated at 33 miles.

For the most part, European models struggle to break the 20-mile mark, because well … 20 miles (NEDC) is a magic number for European compliance needs. 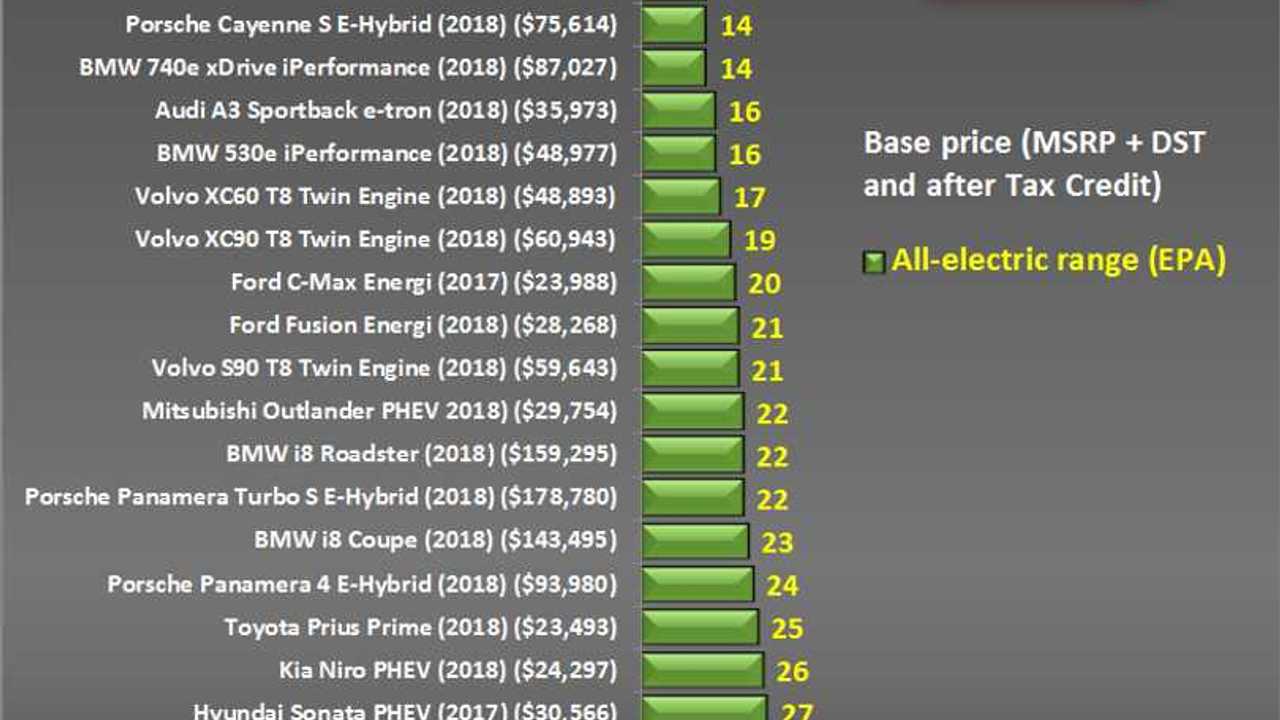 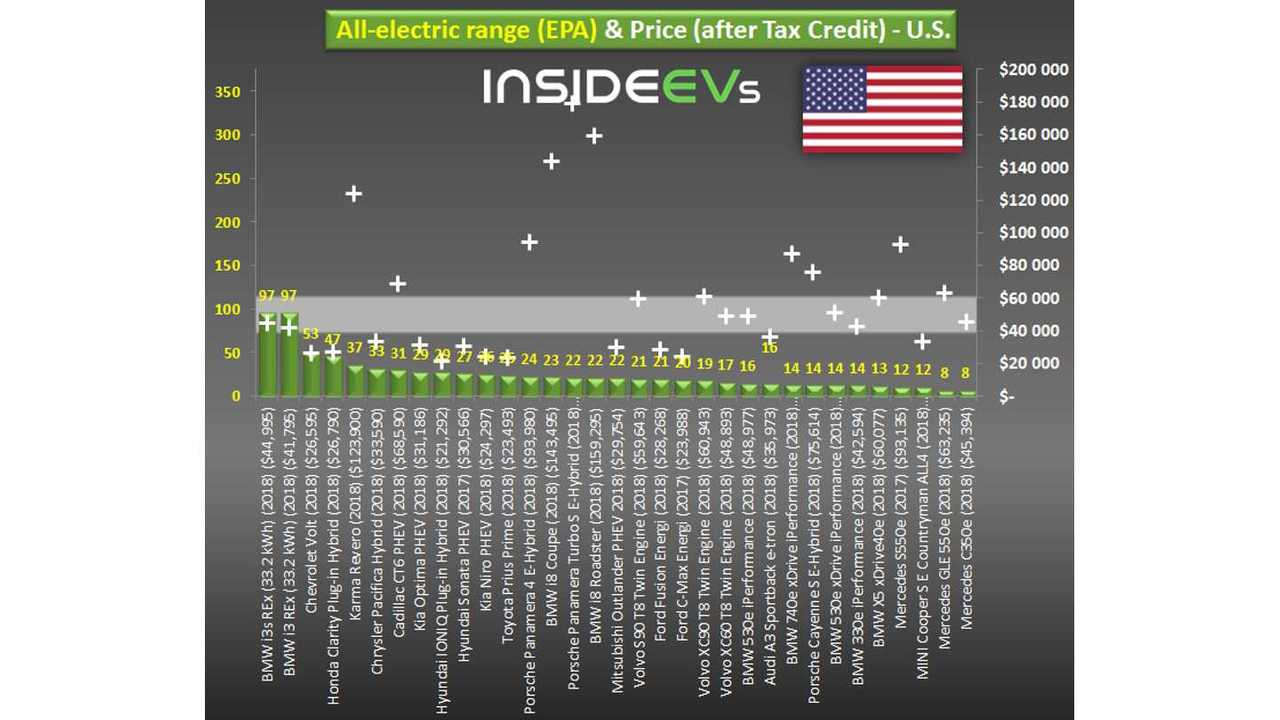 **Keeping track of this data is quite obviously a time-consuming job for us at InsideEVs and we are always appreciative when readers/commenters spot new or additional data points that we can add. You can find our email address here, or leave a handy note in comments to point out anything we may have overlooked.