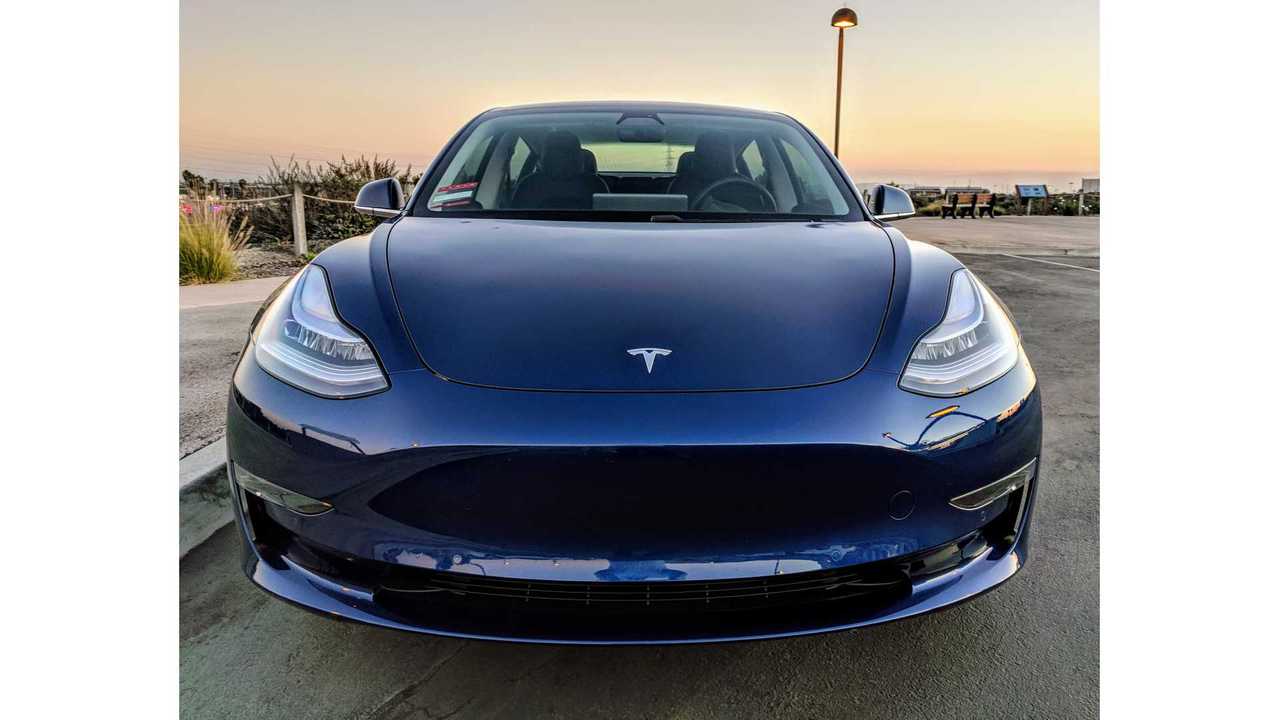 It appears that Tesla is finally beginning to ramp up production of the elusive Model 3. In the first five months of availability, they have only delivered a little over 700 units, mostly all to Tesla employees. However, non-employees are now finally taking delivery of a car that they left a $1,000 deposit on, sight unseen, nearly 20 months ago.

Because of this, Model 3s are finally becoming available for test drives and road test reviews. I was lucky enough to have a friend, who just picked up his Model 3 last week, let me take his car for an extended test drive.

First, I’d like to comment on the build quality, as there’s been a lot of chatter in the online forums and groups about misaligned exterior body panels. I have to say the car wasn’t perfect.

Some of the exterior panels weren’t as perfectly aligned as I’d like them to be. However, while there were some slight imperfections, overall it was more than acceptable in my opinion.

I probably wouldn’t have even brought it up if this wasn’t a topic that’s been so widely discussed. I did have to slam the driver’s door a little harder than I would like to in order for it to fully close though. I learned that because the first few times I tried to close it, the door remained partially ajar.

The Deep Blue Metallic looked so good in person that I’m now seriously considering it for my Model 3. The trunk space is larger than I imagined it would be, and with the rear seats folding nearly flat there’s enough room to haul quite a bit of cargo. The trunk also has a lower compartment to store items like a portable EVSE, tools, etc., and is accessed by lifting the removable floor panel.

The frunk didn’t appear as large as the Model S frunk, but it still provides a good amount of added cargo space. The rear seats are very comfortable, and there’s a lot of headroom in the rear seating area, no doubt aided by the fact that there’s no metal roof with a headliner, just a huge panel of glass above your head.

The frunk isn't as large as the one in the Model S, but it still adds a good amount of additional cargo space. (Image Credit: Tom Moloughney/InsideEVs)

The front seats were also very comfortable and supportive. I’d say they are better than the original Model S seats, but not quite as good as the Next Generation seats that come standard in the S now. I have to admit, I was a little underwhelmed with how the large center screen controls everything. Yes, I had read that was the case, so I knew it did going in. However, it’s different when you’re in the car and forced to use the touchscreen to perform simple tasks like opening the glove box or turning on the windshield wipers.

The left side stalk can be used to activate a single-swipe of the wipers, as well as the washer. (Image Credit: Tom Moloughney/InsideEVs)

I’m all for simplicity, but Tesla may have taken it a little too far. My first impression is that I won’t love everything being controlled by the center screen. Needing to look to my right for every bit of information, as well as to activate accessories while driving, just doesn’t seem all that safe.

Perhaps I’ll get used to it when I get my Model 3, but in my first impression, at the very least I’d prefer to have full windshield wiper activation available on the steering column and a small driver's display or HUD for vital driving information. As it is, you can activate the wipers for a single-swipe to quickly clean the windshield with the left side stalk, but you need to go to the center display if you want them to remain on.

One thing that Tesla did do right with the wipers is that when you activate the single-swipe or washers, the wiper icon appears on the center screen to make it easier for you to activate them. Still, you need to look to your right to find the icon to tap, and this is while your visibility may already have been impaired by inclement weather.

There’s a stalk already on the column that activates the washer and wiper, why not allow that to have full control of the wiper function? Change, simply for the sake of change, isn’t the always the best decision.

Another complaint I have is that the view out of the rear window of the car really is not that good. I realized this when I couldn’t tell if there was a car behind me or not when stopped at a traffic light at night. The rear deck of the car is so high, you cannot see the headlights of cars standing behind you unless they leave a lot or room between the vehicles.

My friend whose car this is commented on this also, and said he’s turned on the rear-view camera a couple times already just to see if someone was behind him. I will say that he does have the rear window tinted, so that could contribute to reduced rear visibility, but it’s not a very dark tint. The fact is, the rear viewing area is short and narrow. The tint isn’t the real culprit; it’s the small area of glass that ends too high up on the rear deck to allow a good outward view.

The rear window doesn't continue down as far on the Tesla Model 3 as it does on most cars. This limits the driver's rear view visibility. (Image Credit: Tom Moloughney/InsideEVs)

You can see how high the rear deck continues up the rear of the Tesla Model 3. The glass doesn't begin until about halfway up. (Image Credit: Tom Moloughney/InsideEVs)

On the road, the Model 3 doesn’t disappoint. It actually felt faster than Tesla’s claim of 5.1 seconds from 0-60, supporting Motor Trend’s recent instrument test which delivered a time of 4.8 seconds. I wonder if under-estimating the Model 3’s quickness is part of Tesla’s Model 3 anti-sell campaign?

The handling was also impressive. While I couldn’t really push the car too much, being it’s a friend’s car who was kind enough to loan it to me for a test drive and combined with the fact that I was on public roads, I was still able to enjoy some spirited driving to test out the car’s maneuverability.

The steering ratio is quick, and there’s practically zero body roll. I’d really love to get a Model 3 on a track. The turning radius isn’t as short as I’d expect for a car of this size, but it’s also not so wide that it’s a problem either.

I like my regen like my coffee - the stronger the better, and in this regard, the Model 3 comes up a little short as compared to some competitors. I’d prefer if they added one more setting that was stronger than Standard Mode, and let the customer decide which they prefer.

Personally, I think Chevrolet has the best regen system available today, allowing the driver to select various levels of strength as well as offering steering wheel paddles to instantly apply the full force of the regen system. I could drive a Bolt all day and never touch the friction brakes.

The adaptive cruise control worked well. To activate it, you press the right steering column stalk down once. To activate Autopilot, you press the same stalk quickly down twice. Another nitpick I have about the need to interact with the center screen, is that you need to do so in order to increase or lower your speed when using the ACC.

Once you set the speed, if you want to change it, you need to do that from the center screen, unless you deactivate the ACC, negotiate to your desired speed and re-activate the ACC. I’d prefer if I could increase or lower the set speed by lifting or lowering the stalk that activates it, instead of needing to tap the center screen. The Autopilot worked nicely but tended to bounce a little back and forth within the lane. It stayed within the lane but wasn’t really as steady as I’d like it to be.

The two knobs on the steering wheel are used to adjust the side view mirrors and the steering column position. I couldn’t find any other use for them, but perhaps they do have another function that I couldn’t figure out in the limited time I had. Speaking of the side view mirrors, they are auto-dimming to reduce glare and can auto tilt for reversing, and auto fold when you park. Both of these features can be activated or disabled in the center screen control option.

The steering wheel has two "wheel" buttons that are used to adjust the side mirrors and the steering column position. (Image Credit: Tom Moloughney/InsideEVs)

The rearview camera has a strange fisheye effect, something that I’m really not used to seeing in a rearview camera. It distorts the field of view a little more than I am comfortable with. Perhaps it does this so the camera can show a wider field of view, but personally, I’d prefer it didn’t have this effect. It’s admittedly a nitpick, but it’s worth pointing out because I haven’t seen another rearview camera with this kind of view. Perhaps it’s something that will be corrected at some point in the future.

We stopped at the Supercharger location in San Clemente, California. There are 20 stalls and we were the only Tesla there. A quick stop added 25 kWh and it cost $5.00. We really didn't need to stop, my friend just wanted to try out a Supercharger for the first time.

We had the place to ourselves! (Image Credit: Tom Moloughney/InsideEVs)

Overall, I’m impressed with the Model 3, and after driving one I’m still very happy I’m a first-day reservation holder. Being a non-Tesla-owner on the East Coast, my delivery estimate is still four months away.

While my short time with the car did raise some concerns about how much you need to rely on the center screen to perform simple tasks while you are driving, I’m still very much looking forward to eventually taking delivery of my own Model 3.