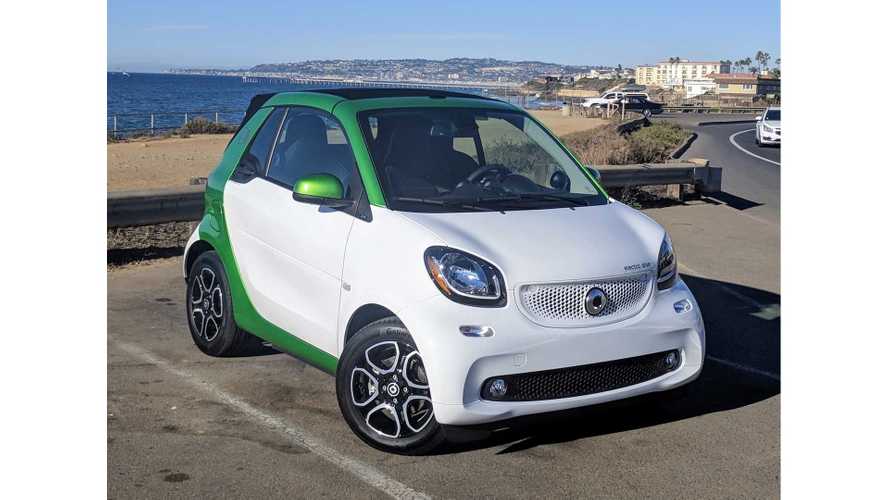 As the world continues the transition to electric drive, we’re finally beginning to get some variety in the form factor of the EVs available.

Tesla, of course, has led the way by not only offering long range EVs, but also giving buyers an opportunity to get an electric vehicle that was something other than a small hatchback, designed primarily for city use.

Now, other OEMs like Jaguar, Mercedes and Audi are following suit, and will soon bring long-range, all electric crossovers to their showrooms sometime in 2018 & 2019. Electric vehicle advocates have long argued that slow EV sales were more of a product of lack of variety in vehicle types available, than that of a lack of demand.

While that all may be true, it doesn’t mean that the small micro and mini cars still aren’t a great platform for electric drive.  In fact, a few months ago it was announced that smart was abandoning internal combustion completely for the US market, and would only be selling electric drive vehicles here starting in 2018. Recent rumors have MINI also considering the same move to selling only electric cars in the near future.

The driver's display can toggle to show different information. Here it's showing the trip and total miles, as well as the distance to empty.

While it’s undoubtedly true that inhabitants of European cities have embraced micro cars more than their US counterparts, there’s definitely a market here for these zero-emission runabouts. Cities, for instance, could potentially save a lot of money on fuel and maintenance, while reducing air pollution if they used these cars for municipal fleets of parking and code enforcement officers, and inspectors like Housing and Board of Health.

smart cars have always been great city cars, and the electric drive smarts are no exception. However, with a short 58-mile EPA range rating (57 miles for the cabrio) the smart electric drive is first and foremost a city car, although some suburbanites that do not have a demanding driving routine may also find the range acceptable for their needs.

Besides the fact that smart is transitioning to electric-only for the US market, the other big news for the brand is that they are now introducing the new smart fortwo electric drive cabrio for 2018. The new ragtop version of the fortwo is the only all electric convertible available for sale today.

I was invited to the Press Drive hosted by Mercedes in San Diego this week to get a chance to kick the tires, roll back the roof and give the new smart cabrio an extended test drive around the city. I’ve driven earlier versions of the electric smart, so I somewhat knew what to expect, and what I was hoping had been improved.

First off, I noticed smart had increased the maximum charging rate from 3.3 kW to 7.2 kW, a welcomed move. Honestly, I can’t understand why any BEV or even PHEV with a battery larger than 10 kWh that doesn’t accept at least 30 amps at 240 volts. Yes, I know it adds cost, but the faster charge rate increases the utility of a BEV immensely, and allows the PHEV owner to drive more miles on electricity, which is the main purpose of getting a PHEV in the first place. That said, I’m happy to report that smart is finally onboard with a proper charge rate for the new smarts. A DC Fast charge option isn’t available, but honestly, with only a 17.6 kWh battery, DC fast charge wouldn’t really offer enough of an improvement in charge time to warrant the extra cost. The battery employs a liquid thermal management system for optimum performance and to prevent early capacity loss from possible overheating.

The power meter displays the state of charge as well as the current level of power delivery or energy regeneration.

The optional 7 inch touchscreen center display is a nice feature, but it can be hard to see with the top down and the sun shining in.

The power meter which displays the state of charge is located on the left side of the driver’s display, next to the A-pillar. This meter also displays how much power is being consumed, as well as how much energy is being recuperated with regenerative braking. I definitely like the new interior layout, it’s an improvement from the previous generation of smart electric drives that I have driven.

Customers that opt for the optional smart Media-System get a 7- inch color touchscreen display with additional functions that include:

The seats are comfortable and supportive

The miniscule 22.8 ft turning circle is perfect for negotiating tight spaces and making U-turns, and the ride quality is pretty good for a car with such a short wheelbase. Yes, you can feel the bumps more than you do with larger, heavier vehicles, but the suspension does a decent job considering the task at hand. The cabrio’s power roof slides back on a track and can be opened at any speed. The tracks lock in place above the side windows and can be removed and stored in a compartment in the rear hatch, giving the car a true convertible experience.

On the road the smart fortwo electric drive cabrio performed pretty well. It won’t win too many drag races with its 11.7 second time from 0-60, (11.4 for the hardtop version) but it didn’t feel that slow either. Perhaps it feels quicker than it really is because of the instant responsiveness of the electric motor, which has more power for 2018.

There’s now 80 horsepower (up from 74 hp) and 118 lb-ft of torque (up from 96). It did have plenty of power to get up to highway speed, but after about 65 mph the power really tails off.  The car is limited to 81 mph, (up from 78 mph in previous years) and that’s probably a good thing as once you get over 75 mph, the small, tall frame gets pushed around a bit by the wind. However, top speed and high-speed highway driving obviously isn’t what smart is all about.

There's a storage compartment on the rear hatch door that holds the two removable roof bars. These bars provide no structural support, so removing them doesn't compromise safety.

Where the smart really shines is driving around town and darting through traffic. It’s about urban personal mobility, and with electric drive and now a cabrio version, that means eco + fun can be had for $28,100 ($23,900 for the hardtop) before incentives. Factoring in the federal tax incentive, and state rebates here in California, the hardtop smart fortwo electric drive can be had for a starting price of only $13,900 and the cabrio for only $18,100.

The regenerative braking is noticeable when you let up on the accelerator, but it’s not nearly as strong as a Tesla, BMW i3 or Chevy Bolt. The regen is also blended into the friction brake pedal, so when you depress the friction brakes, the amount of energy regenerating increases. Also new for 2018 is an ECO mode, Android Auto (with the optional Media System), a slightly larger battery (3 more cells for a total of 96) and a standard eight-year battery warranty.

The smart fortwo electric drive isn’t going to be for everybody. However, it is a pretty nice option for those that want an EV and don’t have very demanding driving needs. It’s perfect for inner city driving, it can fit in the tiniest of parking spaces and if you get the cabrio you can do it all with the sun shining down on you. I don’t expect smart to sell too many of these in cold weather states or in rural areas, but here in sunny Southern California I can definitely see a market for them, especially when considering the sub-$20,000 price tag after incentives.