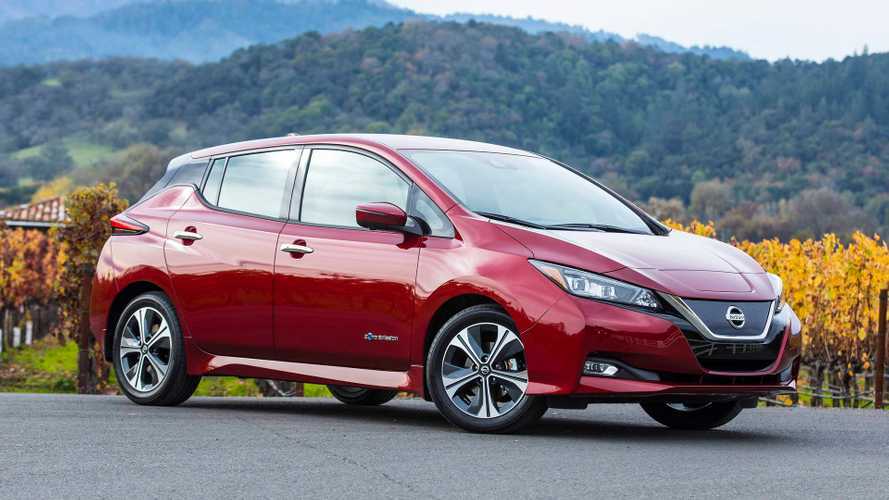 Nissan's second-generation LEAF EV is an improvement in every way.

The state of the electric vehicle union is strong.

Proof of this claim can be found in the new, second-generation 2018 Nissan Leaf, which is finally coming to market in the U.S. at the end of January. When the first-gen launched in late 2010, Nissan had the lower-cost, all-electric segment to itself. Since then, dozens of plug-in vehicles have launched around the world, and Nissan is ready for round two. But this isn't the same kind of competition that the rest of the auto industry is familiar with.

Nissan representatives – both at a drive event in Napa last week and in numerous ways during the six-month media rollout for the new Leaf – have repeatedly said that the EV pie is big enough for everyone to have a slice, and the success of other, competing EVs is not a problem. The more EVs that are on the road, the better, they say. Whether it's about building out a charging infrastructure or getting people to think about switching from gas, Nissan knows there's more to electric mobility than any one model or company.

That said, Nissan has made the Leaf a great option for anyone who wants to drive emission-free, finding a mid-ground in the eternal struggle between lower cost and higher range.

We'll get to that discussion later. For now, let's start with the vehicle as a whole. It's difficult to say anything really bad about the new Nissan Leaf. It's an improvement in every way from the last model. Better looks, more range, more power, and newer safety and infotainment technology.

The design of the original Leaf was, at best, an acquired taste. It did what it was supposed to do – stand out from the crowd as an EV while also minimizing interior noise and aerodynamic drag thanks to its frog-faced headlights. Nissan has either hired better designers in the intervening years or the team there has boned up on their skills, because the new Leaf manages to keep its EV cool without looking like an outcast. The company's V-Motion grille is a good fit for the somewhat busy front end, while the floating roofline makes the EV fit right in on today's dealer lot. The rear end – cool boomerang taillights excepted – is the car's worst angle, but compared to the way the Leaf used to look, the second-gen model is a visual delight.

Inside, the Leaf keeps its low-cost-but-not-cheap feel, with the upper trim levels actually approaching impressive. Controls and buttons are where you want them to be (all powertrain and driving options are centered down low near the shifter, for example), and the in-dash seven-inch screen provides the driver with information clearly, even if you have to cycle through a few menus to get to everything. The front seats felt comfortable and there was enough head room for my 5-foot-9-inch frame. The rear, too was fine, if not as spacious. By the numbers, the rear cargo area would appear to be the same as before (both the new and the outgoing Leaf have 23.6 cubic feet of space), but Nissan has redesigned this space to remove a bump that intruded into the luggage space, which means you can fit more into the back now.

The new Leaf is a little bit heavier than the old model, but the suspension has been stiffened as well, and driving doesn't disappoint when cornering. In fact, given the instant torque available from an electric powertrain and the Leaf’s more powerful motor and higher horsepower, the EV feels zippier than ever in standard driving. Even on the highway, where passing speeds are more important than 0-60 times, acceleration never felt lacking. But maybe you'd rather let the car do some of the driving? You're in luck.

Meant to be a help to the driver, and decidedly not an autonomous drive feature the new Leaf offers ProPilot Assist. The technology is smart enough, most of the time, to keep you centered in a highway lane, keep you a safe distance from the car in front of you, and come to a complete stop if required. One clear example of where ProPilot Assist is absolutely not a replacement for human driving is that it has a hard time recognizing things like trailers and motorcycles. Also, based on my real-world experience with ProPilot Assist on back-country roads in Napa and using the system in a Rogue in rural Michigan, even though you will want to use the system away from the main highways, the number or warning beeps it puts out to tell you it's not able to operate in those circumstances makes it just not worth it.

Using ProPilot Assist is as easy as turning on cruise control and letting the camera find the lane markings. Once engaged, you need to keep your hand on the wheel, and if you ignore ProPIlot Assist's increasingly annoying warning chimes and sirens (it detects if you're holding the wheel using a sensitive torque sensor), then the car will quickly pump the brakes to try to wake you up. If that doesn't work, the flashers will turn on and the Leaf will come to a complete stop in the lane you're in. At that point, honks from other cars or a cop's knock on the window should get you awake.

The self-braking feature is standard on all trim levels, but to get the full benefits of ProPilot Assist, you'll have to select the SV or SL trim and choose the optional Technology Package for $650 in the SL and $2,200 in the SV. If your daily commute includes any sort of regular bumper-to-bumper traffic, opting for ProPilot Assist is almost a commandment. The good news for early adopters is that Nissan is including the tech package with all SLs until some time in the spring of 2018.

No one who buys a new Leaf will have to decide before signing the paperwork if they want e-pedal or not. For those who have driven other EVs, e-pedal offers one-pedal driving basically feels like the strong regen you might remember from the old Mini E or a Tesla or any number of other electric vehicles. As in other EVs that offer one-pedal driving, once you've put a few miles on the odometer, the feeling becomes totally natural. As you take your foot off the accelerator to slow down, just like in any vehicle, a Leaf using e-pedal mixes regenerative brakes with the friction brakes to reduce speed in an efficient manner. As fun and useful as e-pedal is, it's main invisible benefit is that it is more efficient, allowing the Leaf to give you more miles per charge. Safety heads don't need to worry about the cars behind them, either, as the Leaf will turn on the brake lights when necessary.

Nissan smartly made this feature standard on all MY18 Leafs, because it shows off what makes driving an electric vehicle more fun than most gas-powered counterparts (and, if you don't agree, or you want to coast more on a highway, you can always turn e-pedal off). When in D, the new Leaf mimics a normal automatic transmission, while B offers roughly twice as much braking power. You can also select an eco mode for a somewhat neutered throttle response or e-pedal, which can slow the car with up to 0.2 g of braking power, or five-and-a-half times as much as you'll get in standard D mode.

The heart of an EV, its electric battery, has been improved in this Leaf as well. The new pack is the same physical size as the old 24-kilowatt-hour pack, but thanks to improved battery cells and better packaging (24 modules of eight cells each vs. 48 modules of four cells each), the battery is now rated at 40 kWh. Actual capacity is a bit higher, but Nissan isn't divulging its exact size.

As might be obvious by now, the state of the EV union is strong because we've gotten almost to the end of this discussion about the new Leaf and range hasn't been an issue yet. The 2018 Leaf will get an EPA range of 150 miles, which puts it in a lonely spot above EVs like the Hyundai Ioniq, BMW i3, or VW e-Golf (all of which have 125 miles or range or less) but behind seriously long-range EVs like the Chevy Bolt and any Tesla. For now, Nissan is quite happy with this middle ground. A longer-range version with over 200 miles in the battery is due when the 2019 model year Leaf arrives to compete with the Bolt and the Model 3, but this first version will capture plenty of sales for people who know that 100 or so miles is enough. That means Alexa integration, a new seven-inch touchscreen center display and Android Auto and Apple CarPlay in the SL and SV trims, and ProPilot Assist. Speaking of trim levels, the S starts at $29,990, the SV at $32,490, and the SL at $36,200.

Since unveiling the new Leaf in September, Nissan has gotten over 10,000 reservations in the U.S., with the split roughly at 60 percent for the mid-level SV trim, with the base S model and the high-end SL both taking about half of the rest. People can – and will – quibble over Nissan's 150-mile strategy to not take on today’s EV range leaders just yet, but with over 200,000 Leaf sales under its belt around the world, there's a good case to be made that Nissan does know what it’s doing. Driving the new Leaf simply confirms that.