Bigger than a Volt and more electric range than a Fusion Energi, but not exactly the electrified Honda we’d want.

But as far as we are concerned, the only one worth your attention is the plug-in model tested here. The fuel cell car can only be leased from 12 dealers in California, and hydrogen as a fuel source still doesn’t make sense for the vast majority of people. The all-electric offering is available to lease in California and Oregon, and only has an electric range of 89 miles which, going into the year 2018, is kind of laughable. The plug-in hybrid, however, offers an alternative power-train solution that’s usable for most people, most of the time, and it’s available at Honda dealers in all 50 states. 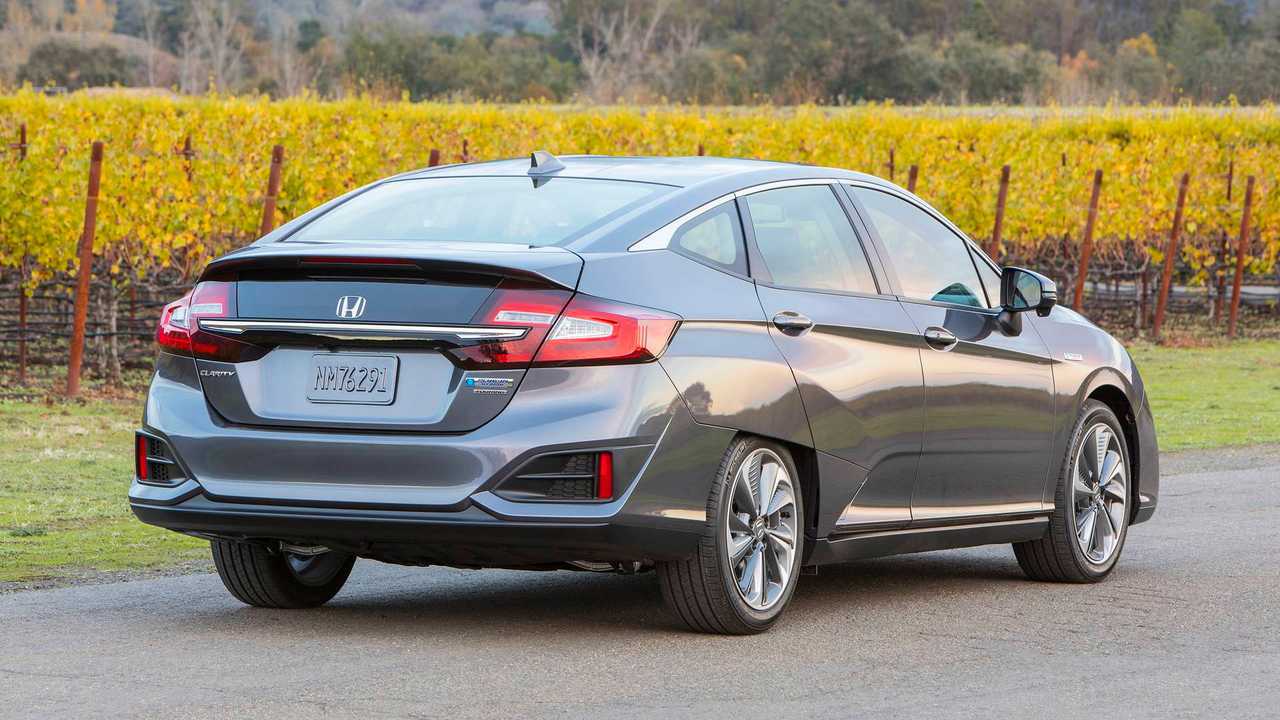 Relative to other plug-in hybrids, the Clarity has a unique position in the market. It’s larger than a Chevy Volt or Toyota Prius Prime, but has more than double the electric range of a similarly sized Ford Fusion Energi.

It comes nicely equipped, with a truly premium-feeling cabin, and it’s affordable: $33,400 for the base car, and $37,490 for the top-level Touring. Assuming short-sighted U.S. Republicans don’t eliminate the country’s EV tax credit, that means a fully loaded Clarity Plug-In could only cost about $30,000. The smaller Chevy Volt will get you a few more miles of electric range (~6 more), but comparably optioned, it’ll cost about $4,000 more.

Editor's Note:  We should mention that if one is looking to lease a Clarity Plug-In Hybrid, Honda will only be passing on around $6,500 of the Federal credit, and only in ZEV states - more details here.

Of course, buying the Clarity Plug-In means having to look at it every day, which might be this car’s toughest selling point. There’s no other way to say it: this thing is hella ugly from every angle. The car’s overall shape is good for aero, as are the functional air curtains along the body sides and those dorky rear wheel arch covers. 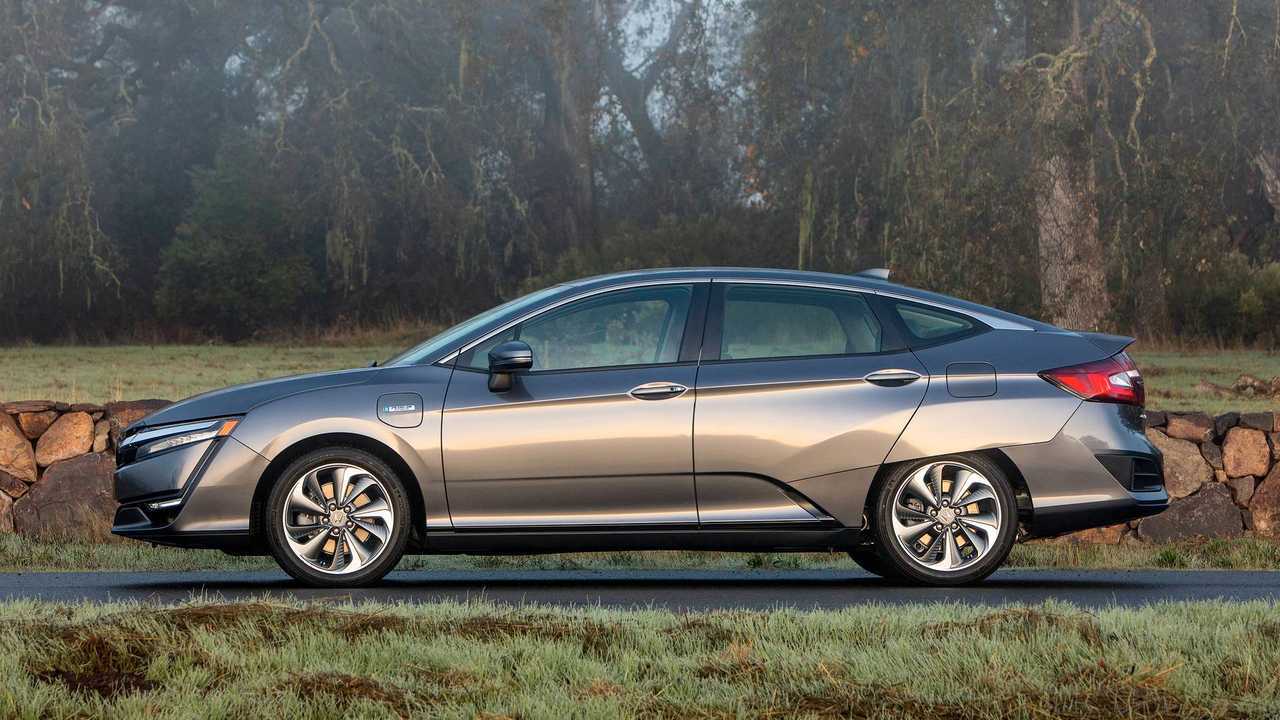 Luckily, you don’t have to look at it from behind the wheel. The Clarity’s interior will be familiar to Honda owners, with a handsome design and premium appointments throughout; if you told us this was the cabin of a loaded Accord, we might believe you.

The top-trim Touring seen here gets “bio-leather” seating surfaces (supposedly derived from plants), and an ultra-suede applique across the length of the dashboard. All models get the company’s Honda Sensing active safety suite, as well as the eight-inch touchscreen Display Audio infotainment system, with standard Apple CarPlay and Android Auto (the Touring trim gets factory navigation). But take note: this isn’t the updated system found in the 2018 Accord and CR-V, with its cleaner graphics and physical knobs for volume and tuning. Likewise, the Clarity’s steering wheel features the touch-sensitive slider control for volume, rather than the Accord’s updated design with normal buttons.

The two big takeaways after spending time in the Clarity are how quiet and luxurious the interior feels, and just how much usable space there is.

Driving through sunny California wine country, wind and road noise don’t filter into the cabin, though when the engine’s on full boil, there’s a pretty loud drone heard through the firewall (more on that soon). Every surface inside is as nice to look at as it is to touch. Plastics are nicely grained; rosewood film surfaces mimic the appearance and feel of natural, open-pore wood; the leather seats are comfortable and supportive. Up front, driver and passenger have plenty of head- and shoulder room, and while we hate the action of Honda’s electronic gear selector, we appreciate the huge cubby below the center console for storage. Moving to the rear seat, there’s a wealth of head- and legroom, far more than the smaller Volt and Prius Prime. The Fusion Energi bests the Clarity in rear seat spaciousness on the spec sheet, but the Honda’s cabin feels more open and airy. 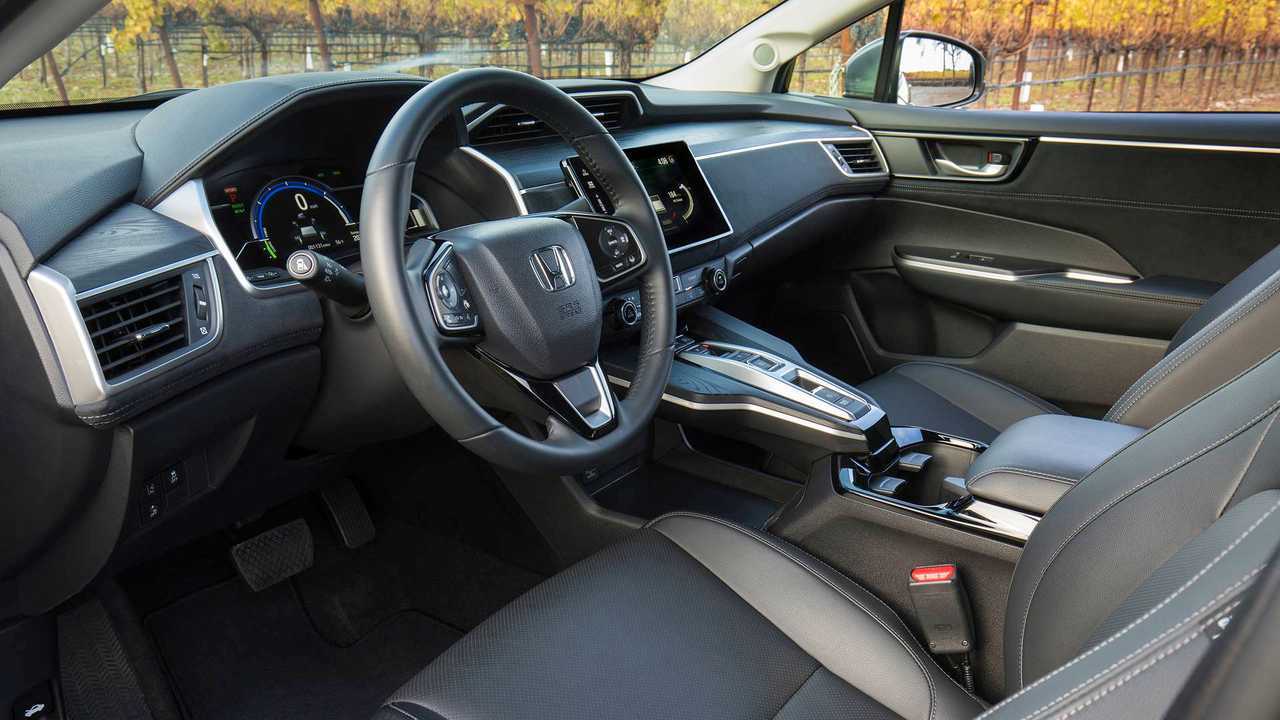 Because the Clarity’s batteries are housed in the center of the vehicle’s architecture, cargo space doesn’t suffer. Open the trunk and you’ve got 15.5 cubic feet of space to work with, compared to just 8.2 in the Fusion Energi, which stores its batteries behind the rear seats. In terms of overall practicality, you can carry four adults and all their belongings easier in the Clarity than just about any of its key rivals. 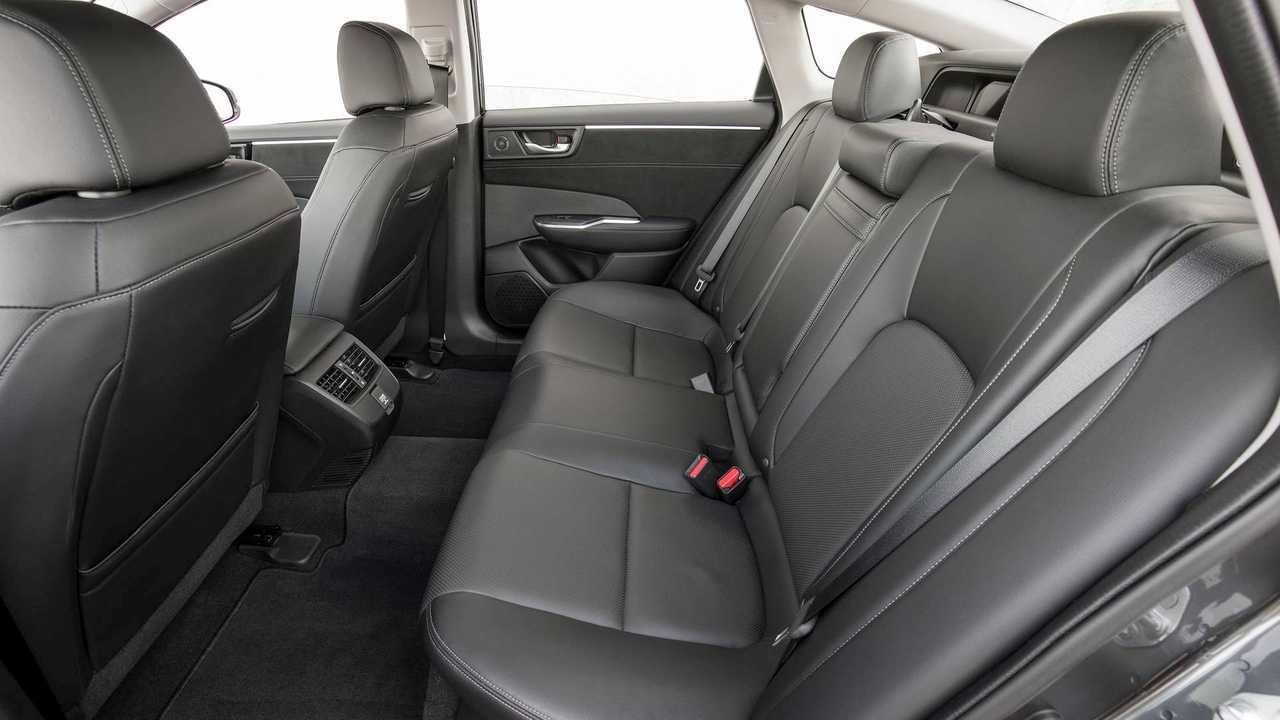 That battery placement gives the Clarity a lower center of gravity, too, which pays dividends in overall handling. It’s not a sporty car, but hustling down a particularly spirited section of road in Napa Valley, the Clarity handles with confident poise. The Clarity stays flat through corners, and the five-link rear suspension design helps keep the ride comfortable while delivering better-than-average dynamics.

Likewise, the steering is pleasant to use, with crisp turn-in and appropriate weight through the wheel’s full range of motion. Road feedback isn’t as present as I’d like – or expect from Honda – but given this car’s intended purpose as a fuel-mizer in city and highway traffic, the tuning is probably fine. 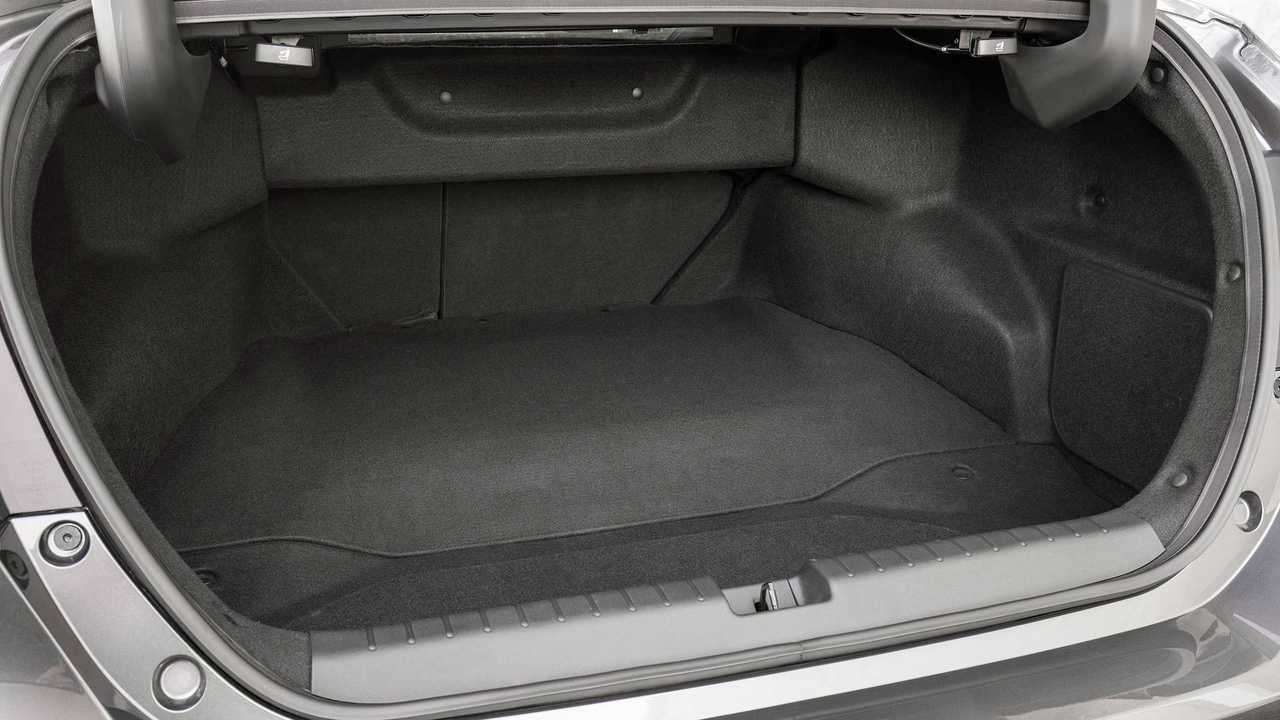 Power comes from a 1.5-liter inline-four that drives two electric motors, with a total system output of 212 horsepower and 232 pound-feet of torque. With a full charge for maximum electric assist, Honda estimates the Clarity will run from 0 to 60 miles per hour in under nine seconds. That’s not exactly brisk, but it’s average for the class, especially given this car’s portly 4,052-pound curb weight.

As for the numbers you really care about, Honda estimates an overall electric range of about 47 miles, and when the gas engine is in full operation, fuel economy ratings of 44 miles per gallon city, 40 mpg highway, and 42 mpg combined. Charging the battery takes just 2.5 hours with 240-volt power, or as long as 12 hours on a standard 120-volt household outlet.

In its standard operation, the Clarity runs on full-electric power as often as possible, though if you’re aggressive on the throttle, the gas engine will kick on for assist. An “Econ” mode reduces the engine’s tendency to supplant power, and even decreases the effort of the car’s interior heating and cooling systems, to deliver the most efficient drive programming possible. An “HV” setting runs the car in hybrid mode all the time, meaning the engine’s always on and the battery reserve goes untouched. Finally, Sport mode turns everything on to full blast, offering the maximum output from engine and battery as desired. There isn’t a dedicated full EV setting – when you’re in normal or Econ modes, just don’t push the throttle past the “click point” where the gas engine kicks on. 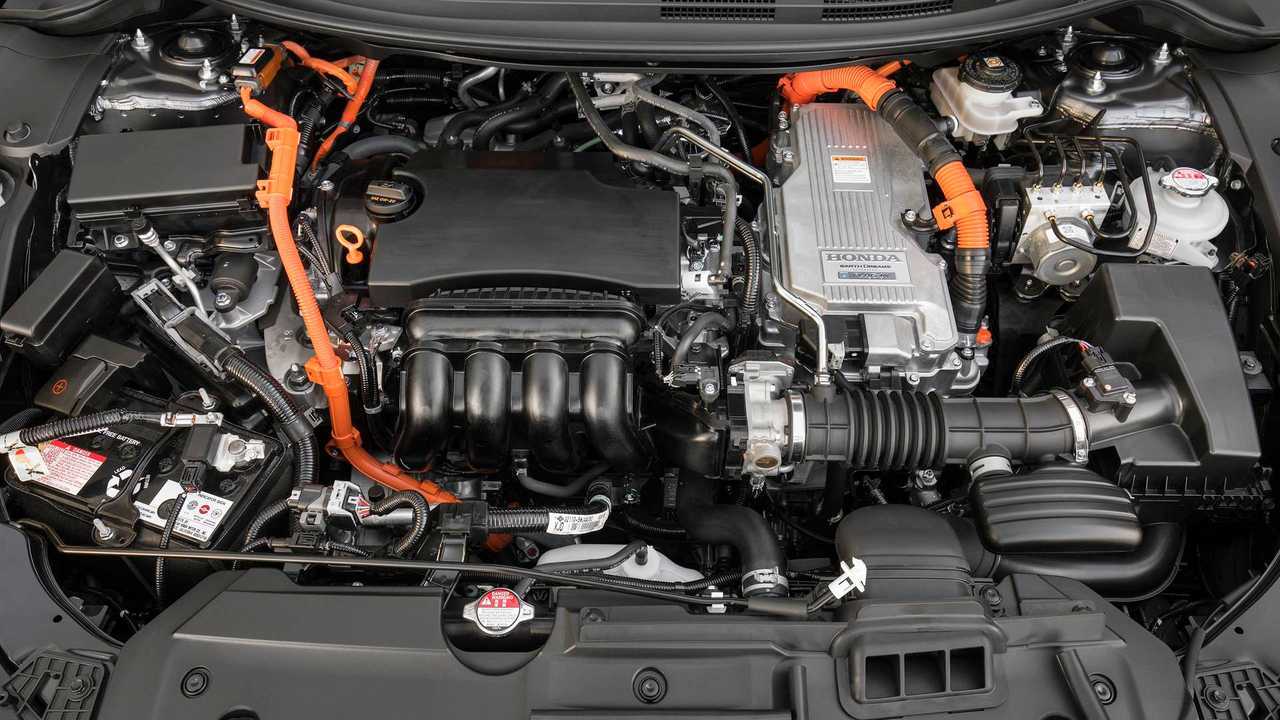 Here’s where things get a little more confusing. See those paddles on the steering wheel? They aren’t shift paddles, but instead control different levels of regenerative braking. Hitting either one turns the system on, the “-” paddle on the left increases the regen level, with “+” working you back up to no regen at all (yes, we agree that it sounds counterintuitive). Speaking of which, should you activate the regen in normal, Econ, or HV modes, it only stays on for as long as you aren’t applying throttle input – the minute you’re back on the gas, the system turns off. But in Sport mode, the regen holds, so you can dig into the throttle as long as you want, and not have to turn the function back on. All that said, there’s no discernible difference between the four levels of regen. Even at its strongest setting, it barely feels like it’s working.

Our advice is to just get in the Clarity, don’t push anything, and drive it like a normal car. There’s plenty of power when needed, though the 1.5-liter engine is super loud and unpleasant to hear when it’s working hard, especially during uphill climbs. The switch between EV and gasoline-assisted operation is seamless, with no roughness or audible commotion from the engine on startup. 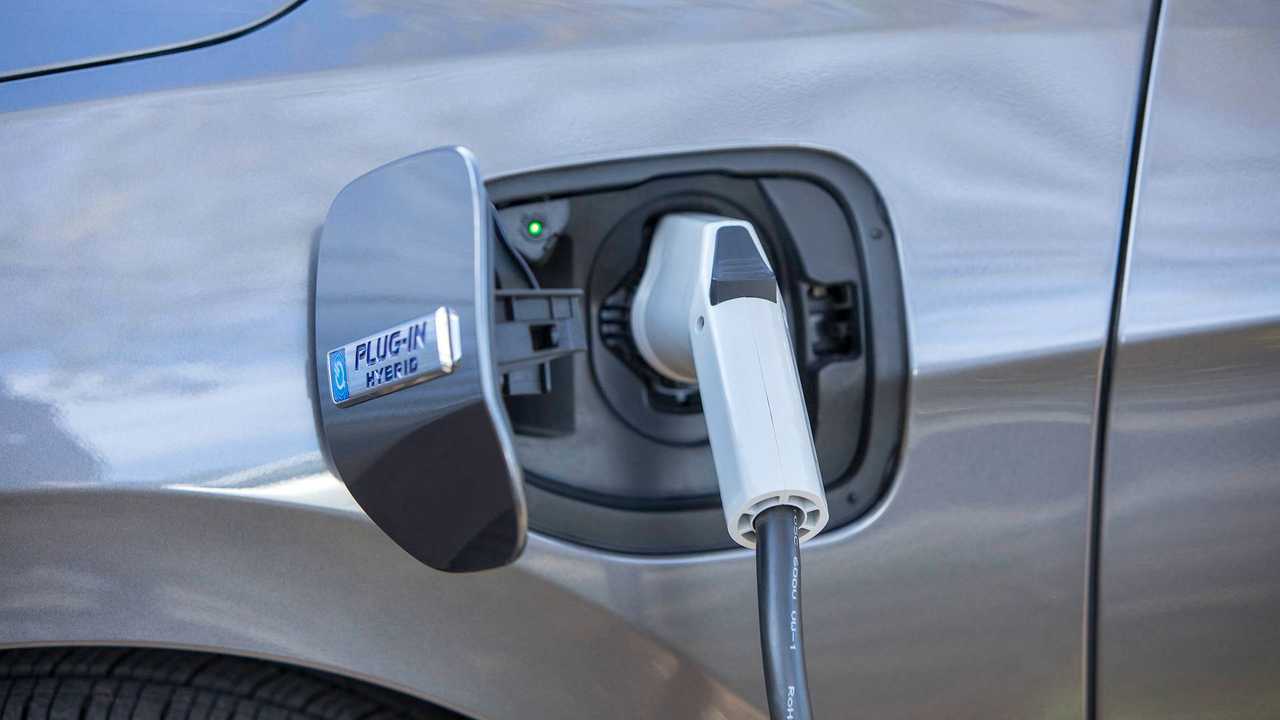 At the end of the day, that’s what most people want from their electrically assisted cars, anyway: get in and go. 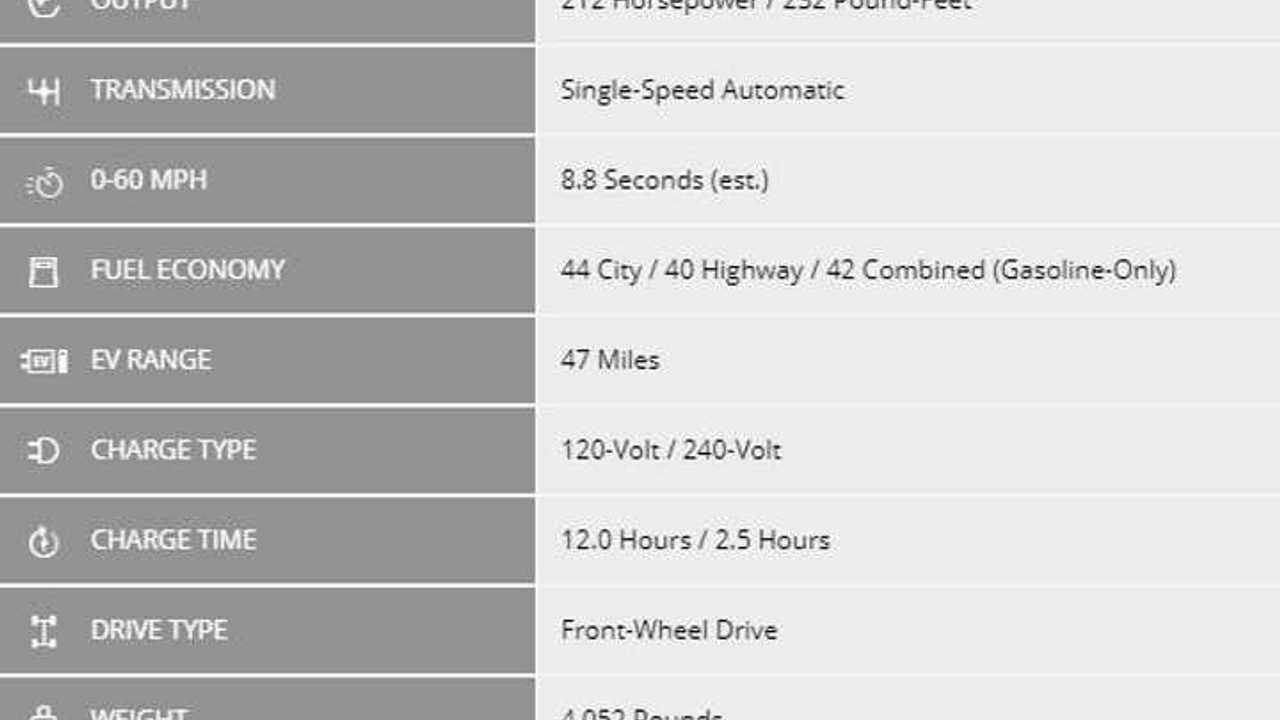 By: Steven Ewing
++
Got a tip for us? Email: tips@insideevs.com