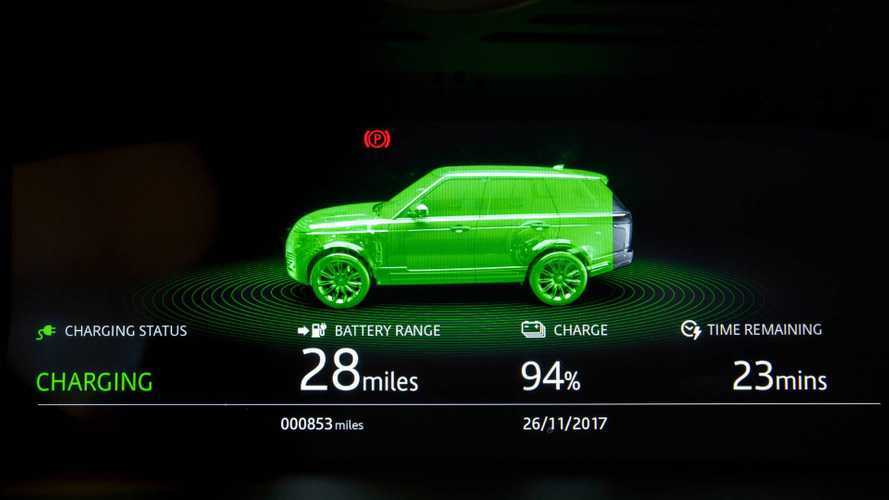 Getting down and dirty with Land Rover’s new eco-minded Range Rover.

With grandiose promises of being the most technically advanced Land Rover vehicle yet, and the world’s first luxury off-roader, the Range Rover P400e has big shoes to fill from the get go. Even though it lacks the traditional diesel or gas engine you’d find in other off-road vehicles of this caliber, its advanced hybrid powertrain promises to be capable both on and off the road. I’m optimistic, then, as I set off on a short drive of an early prototype.

A thorough off-road course just outside of Malibu, California, is our proving grounds, as are the twisty mountain roads adjacent to it. And after just a few minutes of climbing over rocks and splashing through mud using battery power almost exclusively, I’m convinced. Land Rover engineers have done their homework, and the P400e immediately presents itself as a capable alternative to any fully gas-powered Range Rover in the lineup.

Part of that impressive capability is thanks to JLR’s new 2.0-liter Ingenium four-cylinder engine. It’s the same powertrain you’ll find on the new Velar, or the Jaguar XE sedan, but in this application it comes paired to an 85-Kilowatt permanent magnet synchronous electric motor with a 13.1-kWh battery pack, which itself produces 102 horsepower. Put your foot down and the two combine for 398 total horsepower and 462 pound-feet of torque, which is more power than you’ll find on the standard gas-powered supercharged V6 model, which is only good for up to 340 hp and 332 lb-ft.

Land Rover engineers have done their homework, and the P400e immediately presents itself as a capable alternative to any fully gas-powered Range Rover in the lineup.

Even without the aid of a gas engine, the electric motor provides instant torque, good for hill climbing and light rock crawling. An advanced hill descent control system is aided by the electric motor, making it instantly more powerful than other off-roaders in the same category. The P400e also features gradient release hill hold, which comes standard on all Range Rover products. If the car pitches in any direction, it will release the brakes slowly to avoid an uncomfortable jolt.

I completed the trail almost entirely in “Normal” mode without the use of the gas engine. Opting for Rock Crawl and Sand mode at one point, though, kickstarted the Ingenium engine immediately. Land Rover engineers admit that they didn’t want the gas engine starting up due to too much pressure to the gas pedal, causing the SUV to lurch forward unwillingly. For the most part, my adventure was eerily quiet, the only noticeable noises piercing the cabin were that of the low-range gearing working its magic.

In its most efficient mode, the electric motor allows you travel up to 31 miles as a pure EV (NEDC), at 85 miles per hour – unless you like to hammer the throttle, in which case the gas engine will kick on much sooner. In low-range gearing it’s a bit less efficient; after just a few minutes on the trail the battery was depleted from 28 miles to 15 miles of range. A number of downhill sections thankfully recouped some of that energy lost with regenerative braking, and Range Rover engineers say they’re currently working on an even more advanced regenerative braking system exclusively for off-road use.

All of the vehicle’s systems, from off-road settings to air conditioning, are managed via Land Rover’s new InTouch Control dual infotainment. The system is much improved over the outgoing model, and better looking, too – but it is a lot of information to take in. The dual-screen setup requires more than an afternoon to dissect and comprehend fully. The top screen controls basic functions like navigation, the radio, and general vehicle settings, while the lower screen acts as a central hub for the Range Rover’s drive settings and climate controls. Those same drive settings can be controlled via Range Rover’s tactile dial, located just beneath the shifter.

The biggest takeaway is that you really don’t miss the supercharged V6. Like, not at all. Tell someone the P400e were equipped with the gas engine and they might believe you.

Once you figure out exactly how each and every setting is managed, though, it is rewarding. Every function, both inside and out, can be controlled at the touch of a button – or screen, I should say. There are seven different driving modes to choose from, everything from Dynamic to Eco for on-road use, with off-road settings like Grass, Gravel and Snow, Mud, and a few others in between. A button located just below the gear shifter puts the SUV into pure EV mode.

Apart from the new infotainment setup, there’s even more tech to play with as a passenger. Two 10-inch screens are located on the seat backs, and up to 17 connectivity points are located throughout the cabin. Two three-prong outlets – one in the front, and one in the rear – 4G WiFi connectivity for up to eight devices, and of course, plenty of USB ports have added to the cabin. The seats are bigger too, and more luxurious. The driver and passenger seats ride on a wider track than the ones found on the outgoing model, and the rear seats can be adjusted up to 24 different ways. There’s even a hot stone massage setting, because luxury.

Transferring from the trail to the road, and from the standard P400e to the Sport version of the hybrid, the Range Rover really shows off its performance chops. The biggest takeaway is that you really don’t miss the supercharged V6. Like, not at all. Tell someone the P400e were equipped with the gas engine and they might believe you. The goal from the beginning was for Land Rover not to treat the hybrid any differently than the gas-powered model. Lynfel Owen, Vehicle Engineering Senior Manager for JLR, made sure to hammer home the fact that they “tuned it as a 400-horsepower Range Rover Sport,” simple as that. Only some minor necessary tweaks were made to the suspension, as well as the installation of a metal gas tank instead of standard composite helped prevent evaporation.

In Dynamic mode, it’s just as quick and sharp as any purely gas-powered Range Rover Sport before it. The twisty mountain roads of Malibu provide a formidable proving ground for the performance SUV. Both the electric motor and 2.0-liter Ingenium engine work together in perfect harmony with the eight-speed automatic, neither one hampering the other.

In pure EV mode, on the less twisty Pacific Coast Highway, the Range Rover is elegant, quiet, and insanely comfortable to drive. Insulated glass aids in sound dampening, while air ionization removes any unwanted impurities from the outside environment.

After a few hours behind the wheel of both the Range Rover and Range Rover Sport P400e, even in the worst of L.A. traffic, I’m thoroughly impressed. Not only was Land Rover able to engineer a vehicle that was both competent and efficient on road, but it managed to inject its signature capable DNA into the hybrid model for use off road. Gone are the days of enthusiasts hiding from hybrids – embrace the technology, and you’ll be showing everyone how it’s done on your next trail outing.