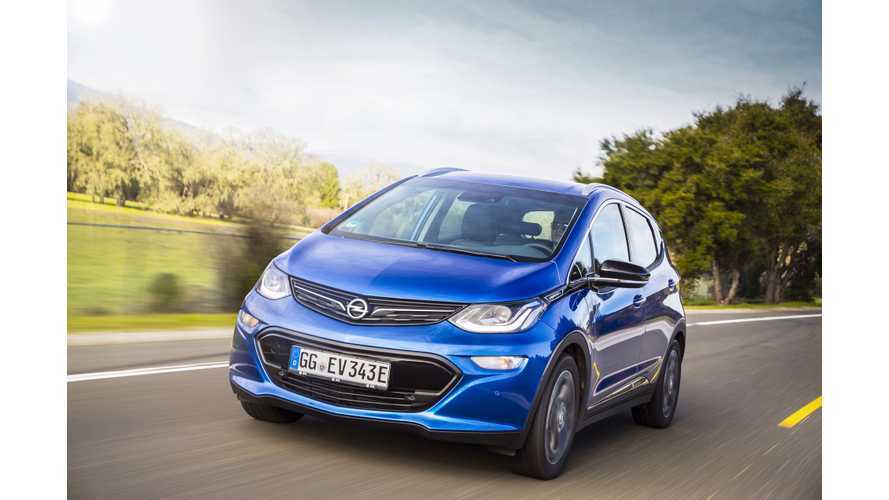 Autocar recently had the chance to test drive the Opel Ampera-e in Norway, which is the launching point of the EV this month.  From there, the Ampera-e will spread across Europe, although we have heard several reports that available inventory of the all-electric Opel will be very thin for the remainder of 2017.

In short, the Ampera-e was well received by the media outfit, and even called the most practical and most useful pure-electric car on the market, at a relatively low price. Both the look and the driving experience was praised.

Autocar notes great acceleration (enchanting like the BMW i3) and accurate range predictions by the Amerpa-E's instrumentation - as after 137 miles the dash was reading out the same net total "distance to empty" as at the start of the journey.

"The Ampera-e's suspension operates smoothly and quietly, and the car stays level in corners while steering naturally and accurately. It grips gamely, too, with great front-end bite and no excess understeer. It hides its weight well and proves remarkably good fun to drive."

On the interior, the Opel Ampera-e doesn't fail in any way:

"Inside, all the trim panels and the dashboard are hard to the touch but easy enough on the eye. The front seats are trimmed in part-perforated leather, the rears in similar-looking vinyl, and the floor is completely flat.

The dashboard is dominated by an 8.0in display ahead of the driver and a 10.2in infotainment screen, the latter housing sat-nav, the usual settings menus and graphics revealing how and where the car's electric energy is flowing. The smaller display includes range, state of battery charge, an indicator showing the rate of current loss or gain of charge, and the speedometer."

"It all looks quite Tesla-like, and there's a raft of connectivity including Apple CarPlay, Android Auto (one or other supplies the sat-nav) and GM's OnStar services system. An induction-charging system for the vital smartphone is standard, and the usual suite of safety and parking-assist systems is also present. This is a well-equipped car."

What we might quibble with is the beginning of the review, which links the Ampera-e (aka the Chevrolet Bolt EV) as the 2nd generation of the previous Opel Ampera (which we know is actually the Chevrolet Volt Mk1), but at the same time noting the change from range-extended operation to all-electric.

That of course is a not valid comparison of the two cars, as there is name a similarity, but in every other aspect these are totally different cars, on different platforms.

We aren't sure if the reason for the statement was just to "dumb it down" for the general reader, but as we know, there is a 2nd generation of the original Ampera/Volt, but the decision was made to not bring that model to Europe.

Sidenote: we have seen this naming confusion on occasion when it comes to Ampera-e registrations, as some countries file the new all-electric offering under the old Volt-based "Ampera" counter, as if it had never left the market, and thus pushing lifetime sales higher than they really ought to be.