Tesla Model S P100D - Verdict From Down Under - Videos 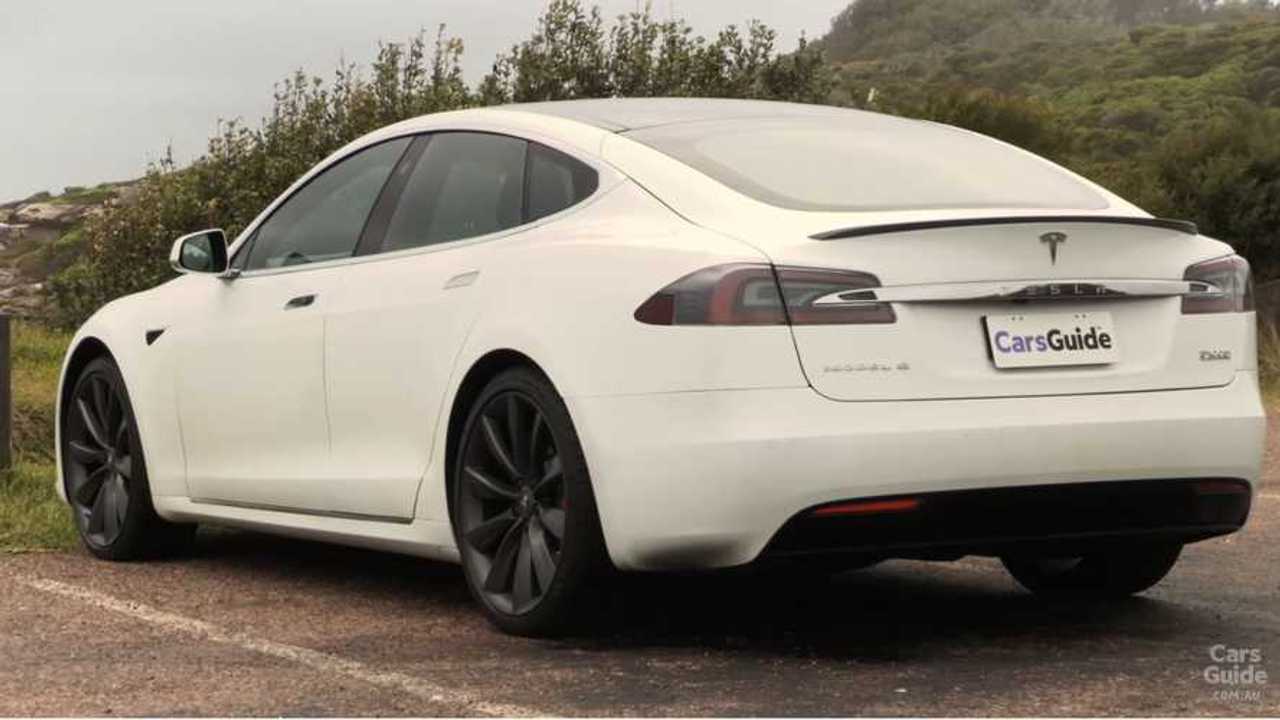 Peter Anderson, from Australia's CarsGuide, posted and in-depth review of the Tesla Model S P100D (link below). He also put together two insightful videos about the all-electric rocket sedan (view the second video below).

CarGuide's Paul Anderson, in the frunk of the Tesla Model S P100D.

Anderson gives the top-of-the-line Tesla Model S an overall Expert Rating of 8 out of 10.

It scored a perfect 10 for fuel consumption, and motor/transmission. The lowest scores were 7s for driving, and design.

Dislikes: Anderson's review is lengthy and very detailed, as are the informative videos. He provides some other interesting information that caught our attention, and of course, we are compelled to share: Overall, Anderson sees Tesla as a technology company. Purchasing a Tesla is like buying company stock. It's an investment into the future. The Tesla Model S is the best car on the market today, if you want to get ahead of the curve in the slow-moving adoption of electric vehicles.

"Last time out, for the Model X, I was a little bit thoughtful, tackling the idea of it as much as the car itself. This time, it’s the Model S, a car I already know well and for most of you will be a familiar sight.

This one though, is the ultimate sleeper. Wrapped in the clothes of an electric car we already know is quick is the Tesla Model S P100D. This is the car the internet thinks has Ferrari worried.

I’ll tell you right now, it doesn’t. But it’s got a lot of people talking because of its time bending zero to 100km/h figure. There’s rather more to it than that though.

This is the third Model S I’ve driven and I have much good news to bring you. Over the years, the car has been refined in such a way that it is very, very well-put together.

The panels fit much better than before, there were very few squeaks or rattles in the interior and nothing felt ropey.

I remember when I first saw this single piece of the first S I drove, I thought, yuk. It doesn’t match and looks like it’s going to fall off. Now, it looks like it belongs. It’s little things like this that build confidence in a manufacturer.

As ever it’s a roomy machine with a flat floor to make rear seat passengers happy and heaps of cargo room.

The boot starts at an impressive 744 litres and then with the seats down ends up at 1795 litres. The boot space is shallow and there’s a lip, but you can store the charge cable down the side in its little bag, which is nifty.

In the front boot you’ve got a further 150 litres. It’s a lot less comfortable, even for a sub six-footer.

Here in the front seat, things haven’t changed much. Or have they? You still feel like you’re sitting on the car because of the thick floor and your proximity to the roof.

The sunroof robs room front and rear and doesn’t have a cover, so like the Model X it’s slip slop slap for me just to go to the shops.

These new seats are really comfortable, far better than the earlier ones. The driving position is good, though, and you’ve got this huge 17-inch screen nice and close so you don’t have to lean forward to use it.

Which is great, because it’s got everything in it – headlights, suspension height, sat nav, mildly annoying stereo interface, how fast it can go. Yes, we’ll get to that.

The music interface is kind of annoying because it insists you use voice controls and try as I might, I couldn’t get it to take any notice of my phone plugged into USB. That’s a pain because you can’t easily navigate it because there’s no CarPlay or Android Auto.

Aside from the sunroof, this car has two electric motors, air suspension, a nearly 500km range in the real world on one charge and a cameras and sensors everywhere.

Options include the real leather interior, the gorgeous 21-inch rims, the up spec stereo and an options pack that adds more real leather and the wacky bioweapons defense mode which is just a dramatic way of saying, “Cleaning up the air for owners who live in Beijing.”

It’s a much better car to drive these days. It was never bad, but the steering was a bit weird and not everything was where it should be or easy to use. By making lots of things automatic, those problems have gone away, but the software that runs the motors is getting steadily more refined and it feels better sorted.

And boy is this thing fast. Under the legal limits in Australia, few things will stay with it in the gears and off the line, you can forget it. This is the fastest straight-line road car you can buy. Today it’s 2.7 seconds to 100km/h, with an upcoming software update, it will be even quicker.

It’s a big car with a colossal amount of power, incredible software and hardware engineering and a James Bond evil genius as CEO.

One of the things I always say about Tesla is that you have to remember that they weren’t even making cars ten years ago. They’re doing this electric thing better than companies that have been making cars for over a century.

They’re actually making cars a lot better than many car companies who should know better. They’re not cheap and they’re not perfect. But when you’ve made a car that goes from a standing start to 100 in 2.7 seconds without tearing itself apart or any histrionics at all, you are absolutely going in the right direction."

#1) It's spacious - There is lots of room in the Tesla, it really can take a family of four comfortably here and there with a lot of luggage. 744 litres in the boot and another 150 litres in the front.

#2) Amazing screen - The screen is super-cool – it’s fast, reliable and looks after almost everything the car does and even has a couple of little surprises called Easter Eggs. We won’t spoil the surprise.

#3) It's upgradable - Just like your phone, you can upgrade the car. Software updates regularly come down the line, sometimes making the car faster or giving it a longer range. Or both. And it’s Not just the software. If you decide you want the self-driving tech, stump up the cash and Tesla will retro-fit it.

#4) Everything works - Everything in the car works really well. There are no excuses, the range estimates aren’t far off reality and it’s all easy to use.

#5) It's so fast - Two motors, 568kW and more torque than any Italian sportscar means a 0-100km/h time of 2.7 seconds. Surprise your friends, make your enemies ill.

There are a couple of problems. The recent software update made the music interface a bit dumb, the back seats are low to the floor and put your knees in your face and you have to pay extra for real leather. At this price, you should know the cow’s name.

See the full print review at the link below.