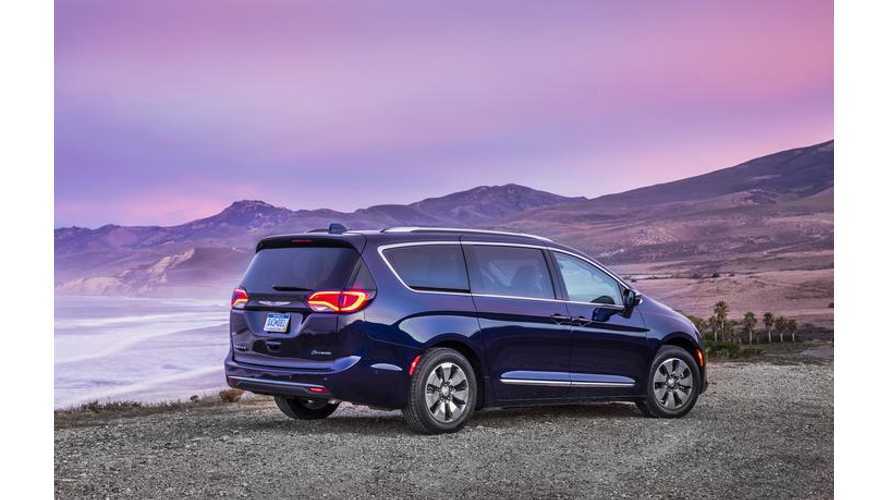 Cars.com had its first opportunity to take the all-new Chrysler Pacifica Hybrid (plug-in) for a spin.

"It's an idea that we're kind of surprised hasn't happened sooner — a hybrid minivan."

Inside the Chrysler Pacifica Hybrid

Yes, it really is the first of its kind, and it's pretty surprising that there have been no other entrants to the segment ... yet.

According to the EPA, the Pacifica gets 84 MPGe and up to 570 miles of range with a fully-charged battery, and a topped-off fuel tank. These are outstanding stats for family road trips.

The Pacific Hybrid has a 3.6-liter V6 and a 16 kWh 360 Volt lithium-ion battery pack. The pack is good for about 33 miles of electric-only driving. Again, a decent number for families tooling around on errands or dropping off and picking up kids. Heck, it should even handle a majority of people's commute ... at least one way.

Chrysler says that once the battery is depleted, that minivan still achieves a combined 32 mpg. This ousts the 22 mpg combined rating of the ICE Pacifica. Let's get to Cars.com's official test drive observations.

Around town - 150 miles  Cars.com observed that the highway stats were almost exactly the same as that of the ICE Pacifica. The traditional Pacifica has an EPA rating of 28 mpg on the highway. Also, at times, the battery was almost fully depleted after just 26 miles of highway driving. In the city, on the other hand, the returns were outstanding. Battery-only range exceeded the 33 miles, and the efficiency for a seven-passenger vehicle of this size is unparalleled.

You can't choose if you want electric-only power or not. The Pacifica Hybrid will turn to the ICE engine whenever the needs arises (cranking up the heat or AC, pushing it hard on the freeway while passing). Having a heavy foot means that the gas is going to kick in.

According to Cars.com, with access to a "new" 240 volt charger, you can charge the Pacifica Hybrid's battery pack in two hours. However, the reviewer said it actually took him four hours (hence the "new" charger reference).

The battery pack takes the place of Chrysler's signature Stow 'n Go seating and storage area. This is one of the biggest draws for many Chrysler/Dodge minivan owners. Not only do you lose the convenient, hidden storage compartments, but you will also have to physically remove the second-row captain's chairs to expand the cargo area. While this is definitely possible, it is by no means an easy task. If you plan to just always use the second row for passengers, and stow stuff out back, you should have no problem.