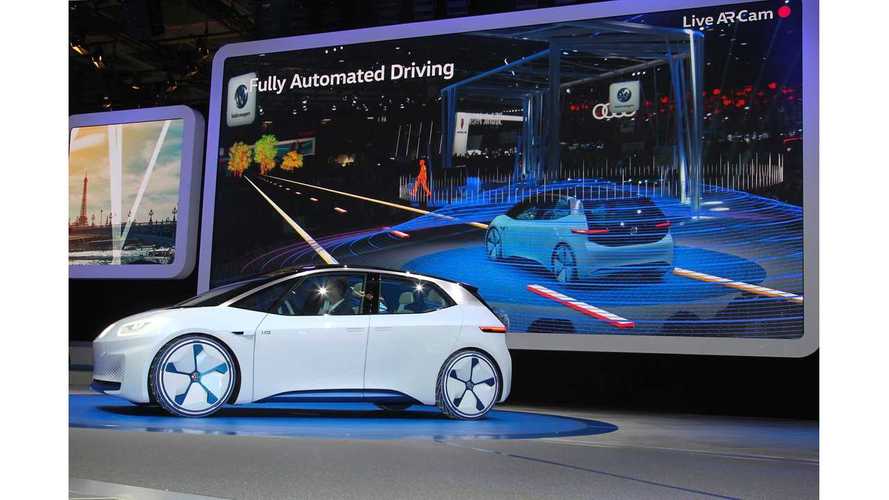 On the occasion of the Geneva Motor Show, Volkswagen finally made the plug-in I.D. concept available for short test drives.

And according to reports...it drives terrible, as it's simple exhibition model, with speed and acceleration limited to city bike levels (25 km/hr, 16 mph), complete with strange vibrations and noises.

The production version is still  about three years off (using MEB platform), and will not share single powertrain piece with the concept shown today, but the overall spirit and design is to be preserved.  One assumes the drives where provided to just show off the pleasing aesthetic attributes.

The Volkswagen I.D. is also significantly differs from conventional Volkswagens. It's shorter than the Polo, but the wheelbase is nearly as long as the Passat, which makes it very spacious inside. Turning circle is less than 10-metre.

Autocar had this to say on the ID Concept:

"Inside, it feels almost impossibly airy – the metal roof supports are so thin and the glazing so expansive that the view out is as if from within a giant, minutely structured bubble. Come production, the roof will be raised further still, although I strongly suspect its pillars will need to be more heavily bolstered to provide sufficient rollover protection. Whether one appears between the two rows of seats remains to be seen, but Leuderalbert says the production car will have ‘conventional’ doors rather than the electric, sliding rear items on the concept, and it’s hard to see how those could be engineered without a B-pillar.

Predictably, the I.D is terrible to drive. I’m restricted to a short strip of pedestrian space alongside a marina in Lisbon, Portugal, and VW has thoughtfully limited the car’s top speed to just a little less than 20mph. It accelerates slowly and haphazardly, even at these speeds showing no sign of the sub-8.0sec 0-62mph time potential claimed for the production version. Yet we should not allow this to delay us, much less to dismay us: most concept cars won’t even move under their own power, so no profit lies in trying to infer some sense of what the real thing will be like, based on a few minutes in a contraption that would render a Unigate milk float as a Porsche 918."

A big part of the I.D. Concept is autonomous driving capability, but it's hard to say more at this stage without a tangible offering to check out.