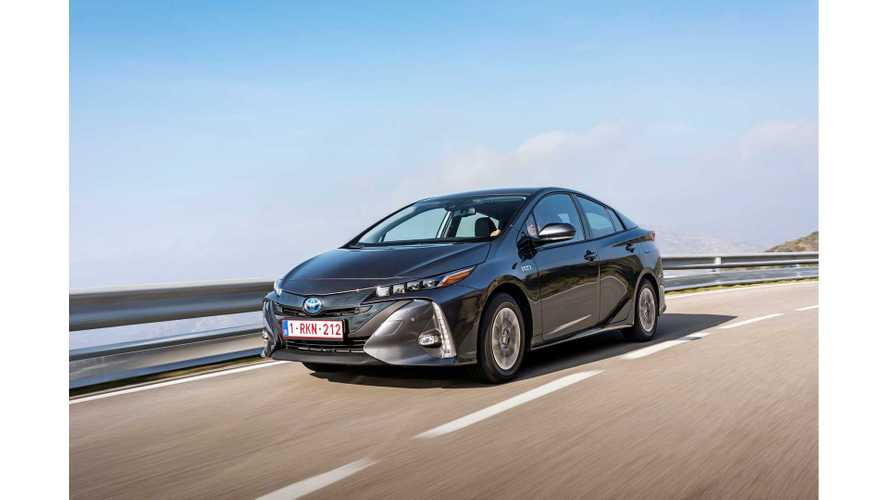 The Toyota Prius Plug-in (Prius Prime), which is entering UK market on March 1st, was recently evaluated by Autocar.

The latest generation of the Japanese flagship is much appreciated for its higher battery capacity, longer range and also extra electric motor power - which extends its capabilities while under EV mode.

According to Toyota, the fuel economy (one of the most important factors for Prius buyers) is rated at 22g/km of CO2 emissions ... and given the craziness in the way plug-in hybrids are still measured in Europe (think US in 2009), the official combined fuel economy is listed at 283 mpg.

A note on the 283 mpg figure:  Given the new Prius Plug-In has about 25 miles worth of real world (EPA) range, to actually get 283 mpg, one would not only have to continue drive less than 25 miles between charging stations almost exclusively, but would also need to plug in about 9 times for every gallon of gas burned.  None too practical.

But what was the verdict?  Did Autocar like the car?  Did it perform well?

The outfit notes that the plug-in hybrid Prius remind them of the conventional hybrid Prius - and the larger battery not only steals one of the seat spaces in the back (only two seats available), but part of the trunk capacity too.

According to the test drive review, Toyota made the Prius Plug-In a little more comfortable and refined compared to current standard version, with better noise and vibration insulation as well as re-tuned suspension. However there is still room for improvements.

"The rewards are just about noticeable, though you still wouldn’t call the Prius Plug-in a refined car to drive in outright terms. It rides with more suppleness than the regular Prius, but its chassis still thumps and rumbles away a bit over poorer surfaces. And while the powertrain’s predictably quiet under electrical power, the petrol engine’s tendency to rev away noisily to its redline when you use anything more than about 50% of the accelerator travel remains a discouraging, nannyish bugbear."

All-electric acceleration up to 50 mph (80 km/h) is noted as being smooth and strong enough. As noted earlier, Autocar finds the real world electric range to be around 25 miles (40 km) - on par with US/EPA estimation (let's not even talk about the 39 mile/63km NEDC/European rating at all).

After discharging the 8.8 kWh battery, the Prius Plug-In drives as regular hybrid Prius, but with an additional 130 kg (287 lbs) of thanks to the larger battery.

"On A-roads and dual carriageways it’s slow and somewhat alienating under acceleration. Along twistier stretches it handles competently but with familiar remoteness. Its standard 15in wheels and 65-profile economy tyres running out of grip quite frequently - and quite suddenly - if you try to keep up a head of steam."

Overall, Autocar laments that Toyota could have done better with the offering overall (driving experience, better material quality and practicality) and that the earlier Prius first mover advantage has been exhausted.

"...compared to the hybrid state of the art – the latest-generation petrol-electric offerings from the European car-makers who’ve spent two decades trailing in Toyota’s wake but are now in a position to go toe-to-toe with it – it’s weedy and one-dimensional".