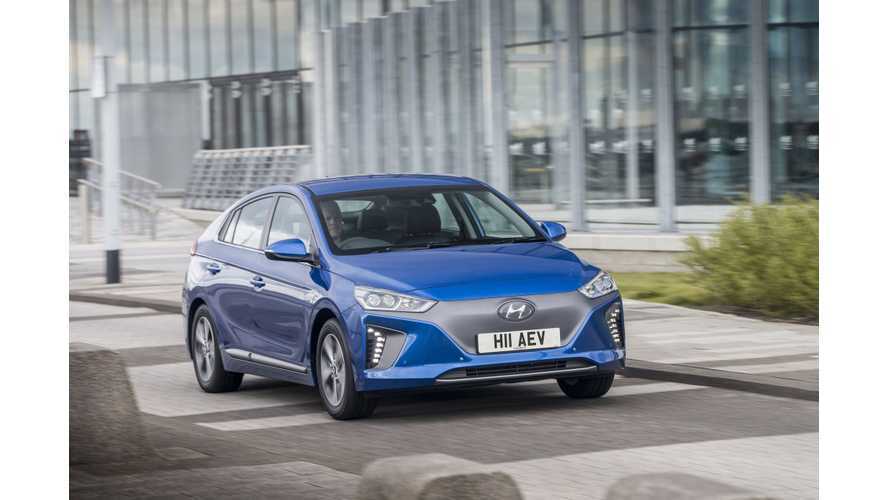 The Hyundai IONIQ Electric has now taken a bow in UK, so we can now note the early test drive returns on the all-electric model.

According to Autocar, excitement isn't the strong suit of the IONIQ Electric, but it's still a decent car with relatively quick acceleration, excellent for city use with its smooth power delivery.

The quiet electric motor (as found in all other BEVs) does however reveal some background noise penetrating into the cabin -road roar and wind noise at speed, so perhaps not enough attention was given to insulating the plug-in version over the straight hybrid by Hyundai.

The brakes also don't appeal to Autocar, as responsiveness seems to be an issue.

"Initial response is very sharp, but it feels like you need to push the pedal a long way further to get any meaningful stopping power"

The driving experience suggests that IONIQ Electric is positioned for normal driving, but without a sporty feel:

"Hyundai suggests that the Ioniq Electric should offer decent driving dynamics. The truth is that while it isn’t bad, it’s not going to set pulses racing. The steering has reasonable weight to it, but it’s vague around the straight-ahead and never communicates what the front wheels are doing.

There’s not a great deal of body roll, but it doesn’t take much to get the nose of the Ionic running wide; blame the low-resistance tyres for that. Pitch the car into a corner harder and you can tell the weight balance of the car is more even than that of a front-engined, front wheel-drive hatch, though.

Even so, this is a car that’s much happier being driven well within its limits. That might not be good for enthusiastic driving, but it’ll certainly help eke out the most range possible from the battery pack. With this in mind, we would have liked more compliance from the suspension at urban speeds. It’s not uncomfortable, but it is on the firm side when dealing with crumbling blacktop. Things do settle down at motorway speeds, though."

Interior quality, rear space and trunk capacity were all were appreciated and given thumbs up.

Autocar says the new IONIQ Electric is worthy to consider against the current Nissan LEAF and BMW i3.