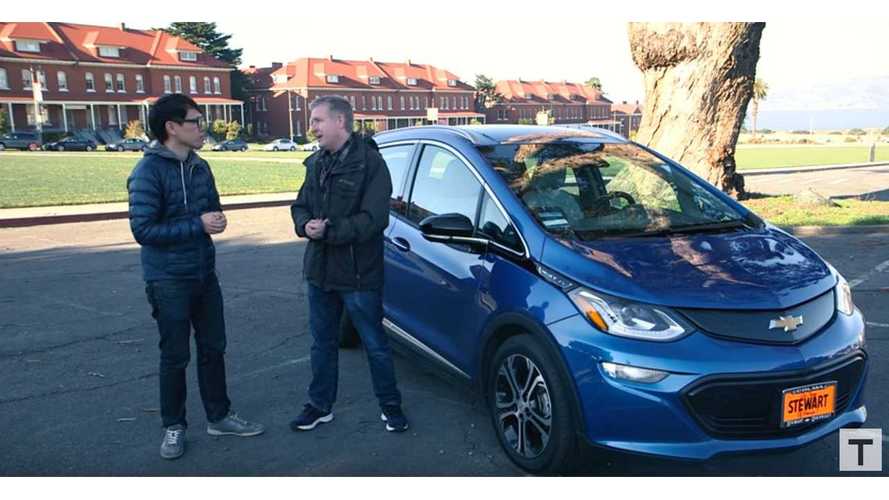 Tested's Jeremy Williams has bought his own loaded Chevrolet Bolt, and he has now been driving the 238-mile EV about two weeks. The video is designed especially for those with a "need to know" about electric vehicles.

He pops the hood and shows that the car has a "normal" 12-volt battery, in addition to the lithium-ion battery, and he points out that there actually is fluid to add (wiper fluid). Of course, he mentions that there are a few other fluids that come into play down the road (like coolant and brake fluid).

The duo does a quick walk around the vehicle to point out the Bolt's cameras and cargo space. Williams doesn't believe that GM is calling the vehicle a crossover (he says that's a bit generous). He doesn't like the fact that there's no spare tire, but he loves the heated steering wheel above all else. It's pointed out later that the heated steering wheel, in addition to the loaded model's heated front and rear seats, affect the battery charge.

Both reporters have a chance to drive the vehicle and share their on-road experiences. They discuss the regenerative braking, the touch screen, and the rearview camera.

We ditch the gas station and go full electric with the Chevy Bolt, the new electric vehicle that just hit the roads. Our own Jeremy Williams picked up the Bolt as his first EV, and we go for a ride and test drive to learn about his experience driving it for a few weeks.