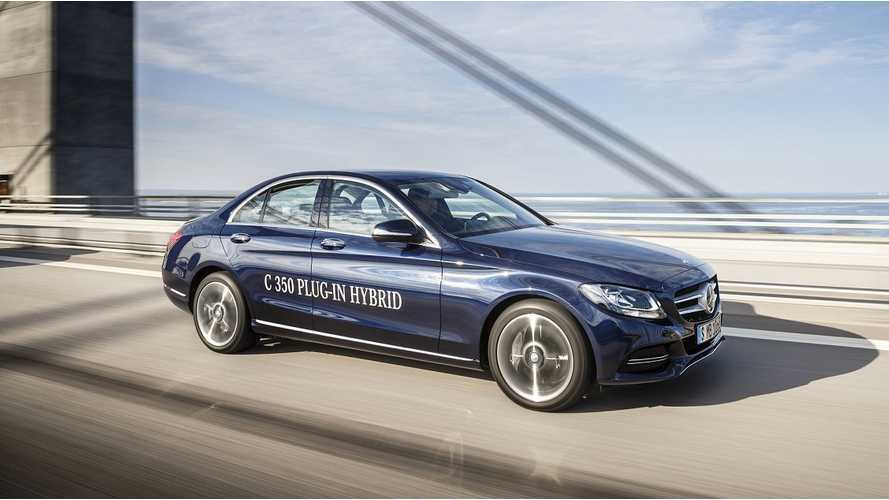 The first note of Autocar's review answers why the plug-in hybrid C 350 is so popular, as the media outfit highlights the fact that it is "surprisingly well-priced" (from £38,900 / $50,560).  With the UK's "ULEV" grant applied, the plug-in C-Class is cheaper than its sister  C 300h diesel hybrid. Mercedes even add its Airmatic air suspension as a standard option on the C 350 e.

Autocar adds that the interior is flawless "pleasant and solidly hewn". Trunk space is slightly smaller than the conventional car because of some battery protrusion, but doesn't hamper practicality.

The live test drive (unsurprisingly) revealed that the 19 miles (31 km) of estimated NEDC range is over-optimistic, as Autocar covered just 12 miles (19 km) on electricity, so one shouldn't expect any more than that from the 6.2 kWh battery.

The electric motor is only 60 kW, so electric mode sometimes will be interrupted by ICE when under stress, which doesn't help to achieve great fuel economy; however if you commute over frequent short distances, this could be the right choice.

...or it can just be the right car for you if you want an inexpensive C-Class Mercedes, plug-in abilities not withstanding.

"To drive, the C 350 e makes for a better limousine than it does a sports saloon. There are several drive modes to choose from, but even in its Sport and Sport+ settings the car's steering feels a bit rubbery and leaden off-centre and the air springs can struggle to maintain flat, steady body control, or conjure much of a sense of connectedness with the road surface. Those air springs also make for noticeable road roar over coarse surfaces.

Despite the promise of hot hatchback-level performance, the C 350 e never really feels fast, and when animated that 2.0-litre turbo petrol engine isn't particularly keen to rev. But at lower crank speeds and less hurried rates of progress the motor is quiet and well isolated, and the automatic gearbox and electric motor work well together to effortlessly preserve forward momentum."

The C350e was scheduled to come to the US last fall as a 2016 model, but has been delayed twice, and is now not expected to arrive until at least early 2017 (if not later, as the plug-in C Class sedan's online listing has been removed from Mercedes US website).