Several months ago, I ordered my 2017 33kWh i3 BEV, and just picked it up just this week. Outside of the range extender, the car is basically fully loaded with every option.  I am still against having any gas capability, and have been fully electric for over 4 years now, (starting with my 2012 LEAF), but can see why many would find comfort in picking the range extender version. Window sticker for my BEV was $53,345 (image below).

Even after all this time, I still feel the i3 is in a different class when it comes to interior quality, I really appreciate the leather dash stitching and dark oak wood dash of the 2017 Terra i3. 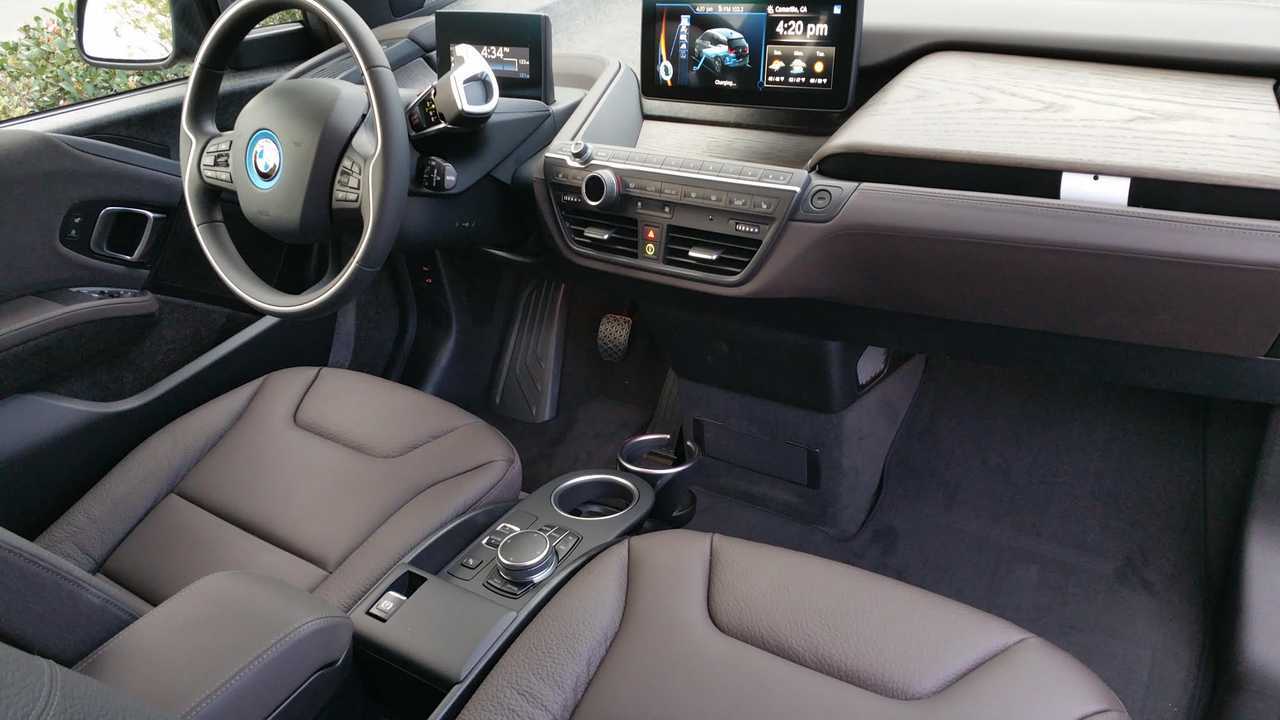 One of my biggest concerns was that the heavier newer 33kWh i3 would be much slower than my 22kWh i3 BEV. That car is pretty quick, clocking 0-60 in the 6.4-6.5 second range. I recently had the factory programming update, and was fearful that it would diminish the older i3's acceleration numbers.

Thankfully, I am happy to report that today's test numbers in the original car are identical 6.4-6.5 numbers from 0-60mph as they were before the software update.

Video (below): Impromptu 'wet test' of the BMW i3

The 2017 94Ah i3 on the other hand feels a little less sharp in acceleration response. But feelings aren't always representative of reality, so I proceeded to put the test gear (Vbox) in the 2017 model for some comparison runs (see above video).

Video (below): Quick 0-60 mph performance run between the BMW i3 and Chevy Spark EV

One of the biggest advantages of the 94Ah i3 is how they changed the charging taper on it. The larger battery can sustain a significantly higher charge rate even when starting at a higher SOC. 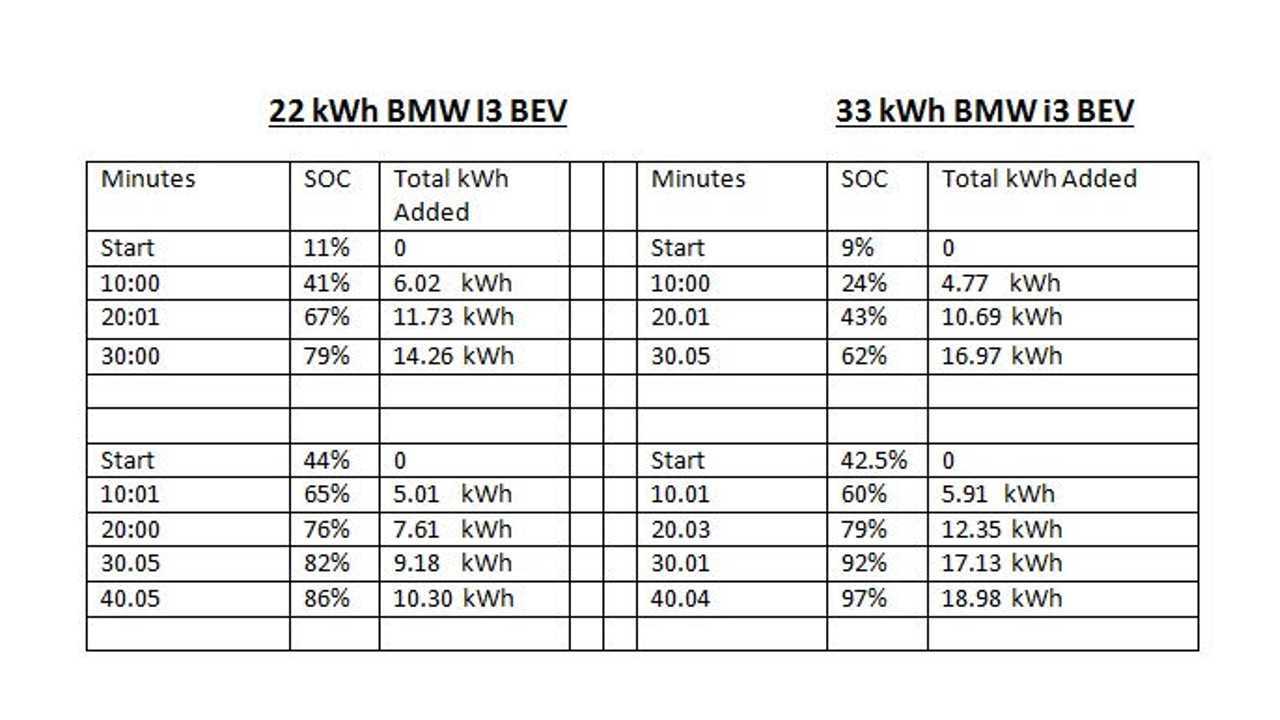 There has been discussion about the much vaunted no taper DC CCS charging of the Chevy Spark. Luckily I was able to take an identical road trip with a new Chevy Spark and did side by side charging time comparisons with my older i3.

Time for a quick test with the Chevrolet Spark EV

When the Spark hit 100% charge in just under 28 minutes, the i3 was at 88% and had an hour to go to reach 100%  So one would think that the Spark is putting at least twice as much charge in its battery as the i3 in the same time, and that is where you would be dead wrong.

Truth of the matter is with both cars starting at mid 20% SOC, by the time the Spark was fully charged just under 28 minutes, its 12.70 kWh gained was only a slim .75kWh greater than that gained by my 60Ah i3. Amazingly the 94Ah i3 in same 30 minutes puts down 17kWh+ even starting at 42.5%. Something the older Spark and older i3 in the chart below can't come close to. 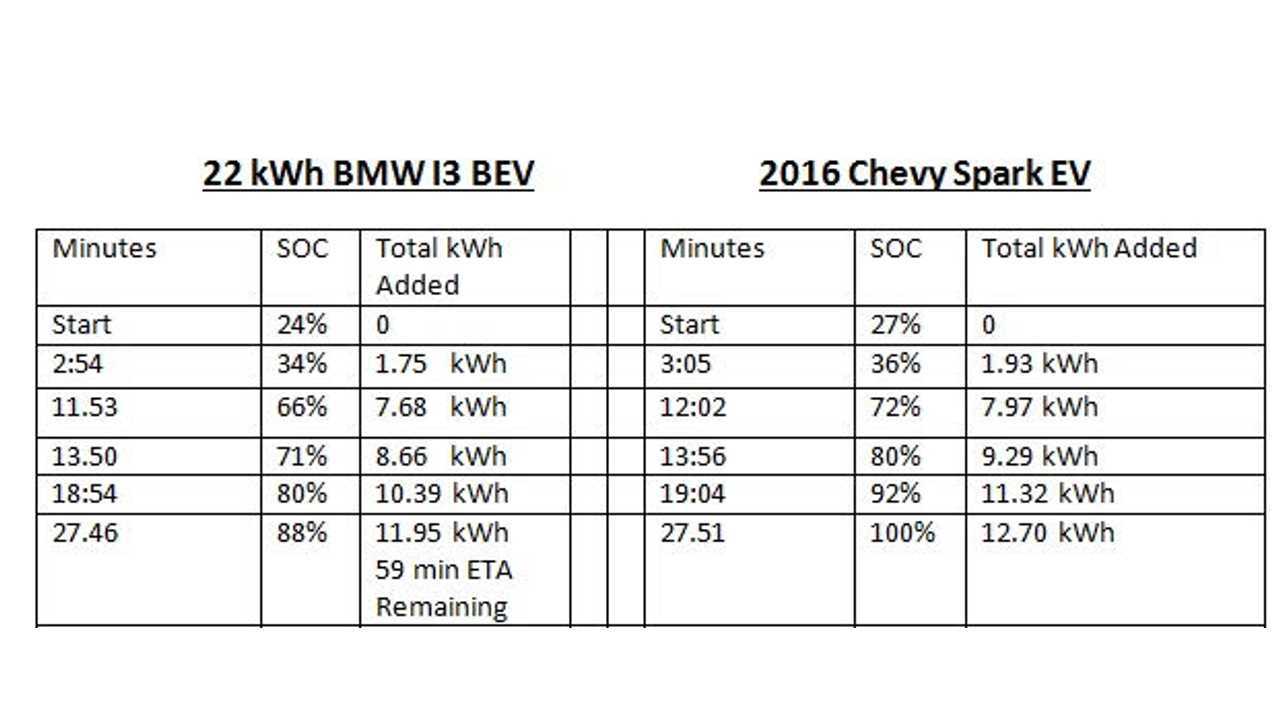 Some more data - BMW i3 and Chevy Spark EV

The i3 has already been around for 3 years, so I am really looking forward to the new Sport model due out perhaps within this next year. I am hoping it will have greater acceleration and more autonomous driving features to distance itself from its immediate competitors once again. The cars unique design principles and the way the i3 effortlessly zips around town with rock steady stability while accelerating is more important to me than hauling around a bigger/heavier battery at this point in time.

By: Warren M
++
Got a tip for us? Email: tips@insideevs.com