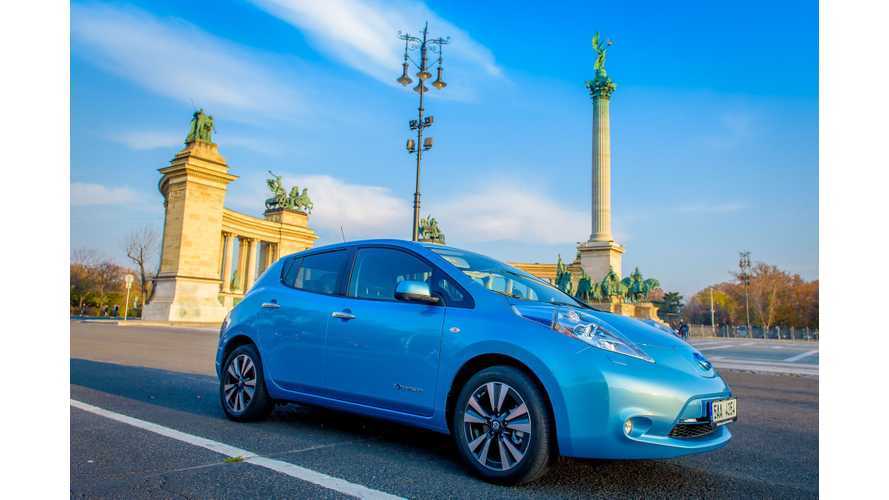 2016 Nissan LEAF after nearly 2,000 miles of mostly short trips (), decided to seize the opportunity of meeting 170 miles away and check real-world capability of covering 350 miles total.

After nearly 2,000 miles of mostly short trips (below 100 miles at once), Autocar's Steve Cropley decided to seize the opportunity of attending a meeting 170 miles away, while checking out the "real-world capability" of covering 350 miles total in a new 30 kWh Nissan LEAF.

Steve's overall opinion on the LEAF before the journey was: useful, refined and enjoyable.

To average things out, Cropley decided to drive faster on downhill parts on his own, and then back under the warmth of the aero-shield again when necessary.

The takeway is still that, without fast charging, covering the 170 miles would be difficult, but it was noted that the UK now has a lot of CHAdeMO DC fast charging stations installed.

Ecotricity's Electric Highway was used during the trip, and reported as being reliable -with a 20 minute stop recharging the 30 kWh battery from 38% to 83%. An important tip for LEAF, and most other EVs, is that the last 15-20% of state of charge is replenished at much slower pace, and isn't recommended (the optimum situation for the shortest journey drive time is to find DC fast chargers along the route and recharge to around 80% each time).

The final verdict after 350 miles in a 107 mile BEV, seems to be surprisingly very positive (in year's past we have heard some horror stories from the UK):

"I arrived in plenty of time for my 7pm meeting, not at all fatigued (comfy seats) but feeling good because the trip showed we had covered 356 miles for minimal fatigue — and zero expenditure.

Truth is, it was easy. Better still, I won’t feel daunted next time. For the Leaf owner, this is an important threshold to cross."