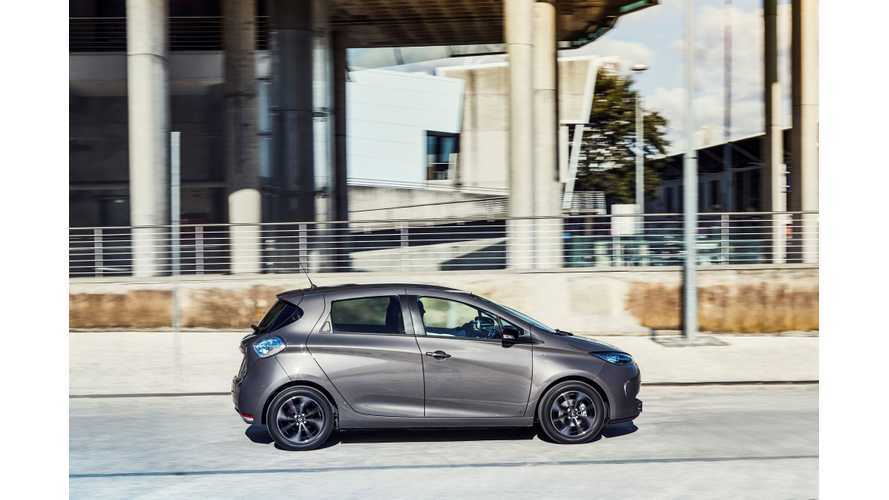 Thanks to the EV's new 41 kWh battery (up from ~22 kWh) and a real world range of 186 miles (300 km), it's widely expected that the ZOE will be now considered by a lot more consumers than ever before.

In fact, the range now exceeds any other mainstream, affordable all-electric car (this according to Renault); at least until the Bolt EV's sister car - the Opel Ampera-E arrives in the Summer.

Autocar notes that the range estimates the car gives the driver were uncannily accurate on their trip - out by just a mile after 25 miles of travel, and almost on the button after a full long distance trip.

Driving experience is noted as acceptable, despite a 0-60 mph time of about 13 seconds.

The term used to describe acceleration was "peppy" under 40 mph, "perfect, then, for the stop-start nature of Lisbon’s packed inner-city streets."  Above 40 mph, the car's abilities fades significantly, which lead Autocar to state that "overtaking requires a little more planning" at speed...which is a nice way of saying 'it kinda sucked'.

"Like the car it replaces, the R90 turns in keenly and stays flat while resisting understeer, thanks in part to a centre of gravity that’s lower than that of the latest Clio. Granted, it’s not as sharp as its petrol-powered sibling once the road becomes tight and twisty, but that’s to be expected of a car with a kerb weight of 1480kg.

That said, these cars are predominantly used as short-hop, urban-environment runabouts, a task at which the Zoe excels."

Overall, the new Renault ZOE is considered a practical five-door hatchback for city driving, with a well-equipped interior, although the Signature edition didn't impressed Autocar:

"Not everything has improved with this facelift, however. Renault now offers a new top-level Signature Nav trim, which should, in theory, bring the Zoe’s interior closer to that of the luxurious i3. But in reality, the leather upholstery, Bose sound system and brash bronze colour scheme does little to lift what is effectively a dated Clio cabin. We’d rather save our money and go for the more restrained Dynamique trim instead."

As for should you buy one - the determination is 'why not?', at least if the original ZOE appealed to you in any way, or you drive predominently in the city, the added range is simply an extra bonus.