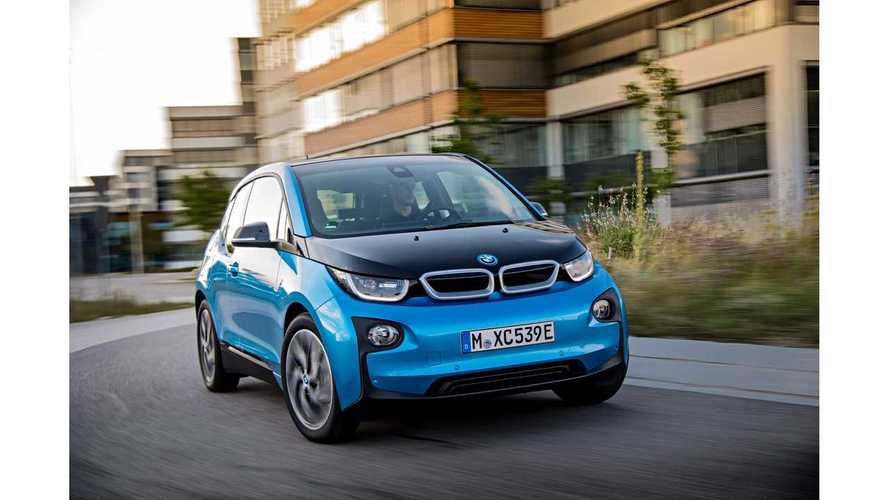 The new BMW i3 with 33 kWh battery pack (94 Ah lithium-ion cells) has now been made available for media test drives in Germany.

As one expects, more battery capacity translates to longer range, estimated realistically by the EPA at 114 miles (183 km).

If you dare to dream, the Euro/NEDC metric puts the new i3's range at 195 miles/314 km...but make no mistake, the BMW isn't coming close to the range found in the upcoming  Tesla Model 3/Chevrolet Bolt EV.

Of note:  BMW itself isn't using the NEDC method itself in Europe, but rather has chosen to promote the 2017 BMW i3's range at 125 miles - probably because that works out to an even 200 km.

The other major upgrade this year for the 2017 BMW i3 in Europe is the three-phase 11 kW on-board charger. DC charging through CCS Combo, which takes about ≈40 minutes (0-80%).

A few of the Autocar findings:

"...it’s clear a more generous footprint would have helped with the i3’s two biggest failings: its ride on rough roads and access to the rear seats."

On poor roads: The i3 is unsettled, and reacts badly to rough surfaces, perhaps due to the thin 19" wheels and stiff chassis, making it uncomfortable for passengers

On the good bits of road: The i3 was "uncannily smooth and swift", although the publication notes that on media test drives in southern Germany, nice stretches of road were difficult to find.  "The serenity of the progress makes using the full potential of the i3’s electric motor hard to resist."

"As a driving machine, the i3 has an impressive ability to get out of the driver’s way. The upright seating, high driving position, panoramic view and lack of mechanical interference all allow the driver to either concentrate on the city traffic or just enjoy the view.

On our test route, the i3 provided a tremendously agreeable way to travel through the lush greenery of southern Germany and it also cut swiftly along autobahns without feeling out of its depth."

Final takeaway?  The new longer range BMW i3 is still a step in the right direction and has much more usability (especially if you can charge at home), and the model itself is a refreshing drive.