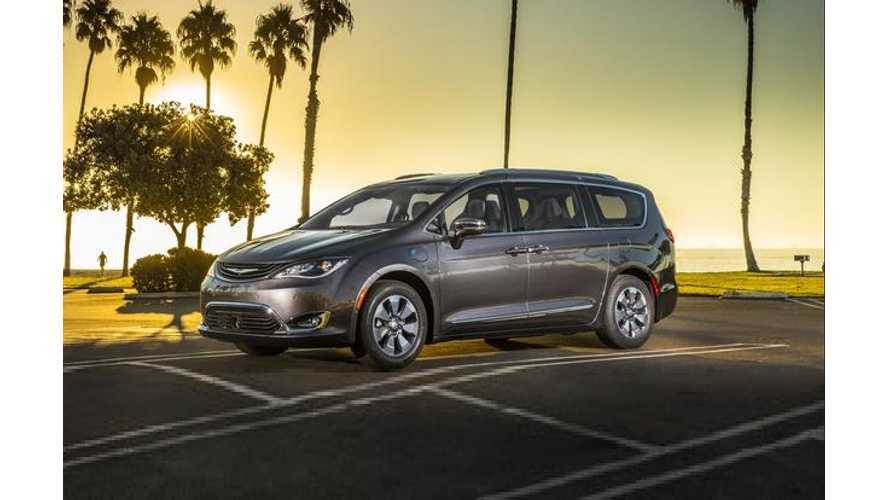 Chrysler has announced the long-anticipated pricing for its new plug-in minivan - the (poorly named) Pacifica Hybrid, and pricing is unexpectedly sharp, which should translate into some decent demand for the plug-in.

2017 Chrysler Pacifica, with an estimated rating of 80 MPGe in the city

A second trim level - Platinum adds a swiss-army knife of new minivan options and starts from  $44,995.

Starting Pacifica Hybrid pricing puts it in line with the top petrol trim level - the Limited (from $42,495), but when accounting for the tax credit puts the plug-in equal to the mid-grade Touring L ($34,495), and just $5,900 more than the base stripped down LX.

As for what the Pacifica Hybrid can do, the van has an estimated 30 miles of all-electric range (530 miles total range).  Chrysler also puts an estimate of 80 MPGe for city driving on the Pacifica, we assume its 'van-like' features at speed mean it will ultimately have one of the lowest highway MPGe figures out there for PHEVs when the final numbers are available.

We should note that while the Pacifica can operate in EV mode up to around 70 mph, there is no specific "EV mode", meaning the van chooses whether or not you are driving on the battery or the petrol engine.  With that said, if you have usable energy remaining in the battery it is very likely you will be running all-electric...this isn't the last generation Prius Plug-In (see video review below as an example).

Who doesn't love this roof?

The 16 kWh battery and other electrification components add about 650lbs to the package, while the battery itself is stored under the 2nd row seats.

The battery housing in the floor also means that if you just have to have the "Stow N Go" package in the 2nd row, this Hybrid isn't for you as that feature is not available.   The third rows "Stow N Go" feature is unaffected.

Chrysler says that production starts later this year, and the Pacifica Hybrid will arrive on dealer lots in early 2017.

Further to that news, we can report/confirm that FCA's Windsor, Ontario assembly facility actually begins that production in about 2 weeks time, on Monday, November 28th.

Fortunately, first drive reviews are already coming in, and from what we can tell Alex on Autos (video below) has once again done the best job covering Chrysler's upcoming plug-in.

The Pacifica Hybrid Premium also includes as standard a 7-inch full color driver information display (DID), unique to the Pacifica Hybrid models. The customizable cluster’s display changes color to indicate whether the Pacifica Hybrid is operating in electric mode (teal) or hybrid mode (blue), while both the battery level and fuel level are always displayed. One of the available cluster displays is the “efficiency coach,” which guides owners to drive more efficiently and maximize the time spent in battery mode.

Also standard on the Pacifica Hybrid Premium is the Uconnect 8.4 system, which includes an 8.4-inch touchscreen, available Uconnect Navigation and Uconnect Access connected services. The Pacifica Hybrid also includes the all-new Hybrid Electric Pages, providing owners with helpful vehicle information, including access to the vehicle’s charging schedule and a summary of miles driven in both electric and hybrid modes.