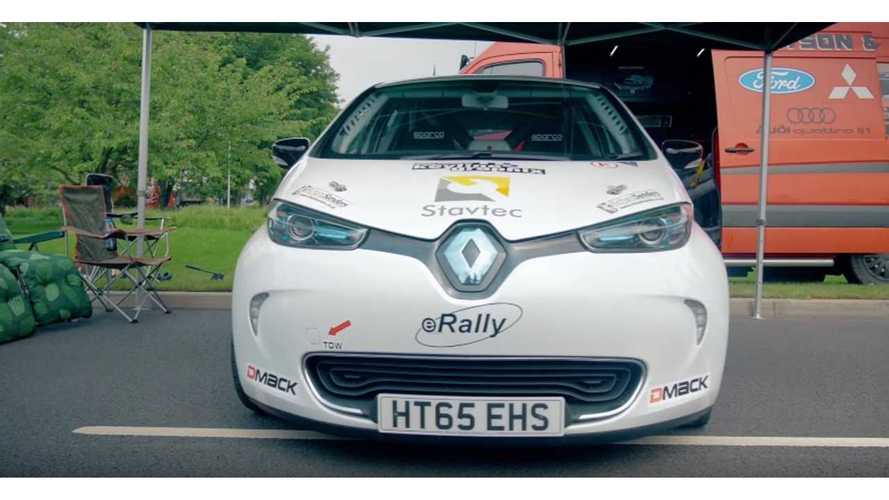 A special Renault ZOE, modified by Project eRally, was recently tested by Autocar against some other traitional/petrol vehicles for "the most fun you can have on a budget" (see also earlier coverage of the car via Fully Charged).

Check the video (above) from the ~2:05 mark to see the all-electric Renault review kick off.

The British company now intends to develop a rally version of the ZOE for the Junior Rally Championship that could start in 2017 or 2018 in UK.

Are you 14-17 and interested in motorsport? eRally are building the UK's first zero-emission competitive rally car to compete in the Junior Rally Championship.

According to the article, the ZOE's powertrain was originally developed with big safety margins so there is potential there to tweak performances.  The car as it stands, has been lightened (by about 100 kg to 1,300 kg) to better perform on the track, and there has also been some suspension changes, coupled with an adjustable regenerative braking system.

For 14-year-old drivers, the higher seating position (due to battery in the floor) is obviously not a problem.  Overall, Autocar finds that the eRally Renault ZOE also seems to handle pretty well.

“We’ve fitted competition suspension and competition tarmac rally tyres to the car, and it handles really well. It’s been set up to be quite forgiving and neutral, so you can really enjoy driving it.”

“Once we remove the traction control and ABS, it’ll be even more fun to drive. We also want to add adjustable regenerative braking to better train drivers how to make the most of electric power.”

The Autocar article on the subject also notes:

"Glan-y-Gors is a narrow, technical track that rewards late braking and smooth lines, and the Zoe makes achieving both incredibly easy.

The Zoe is agile but not snappy, zippy out of corners but not lightning fast down the straight and ultraconsistent, and even after a dozen laps I can see this would make a fine tool for a young rallying hopeful to cut his or her teeth in."