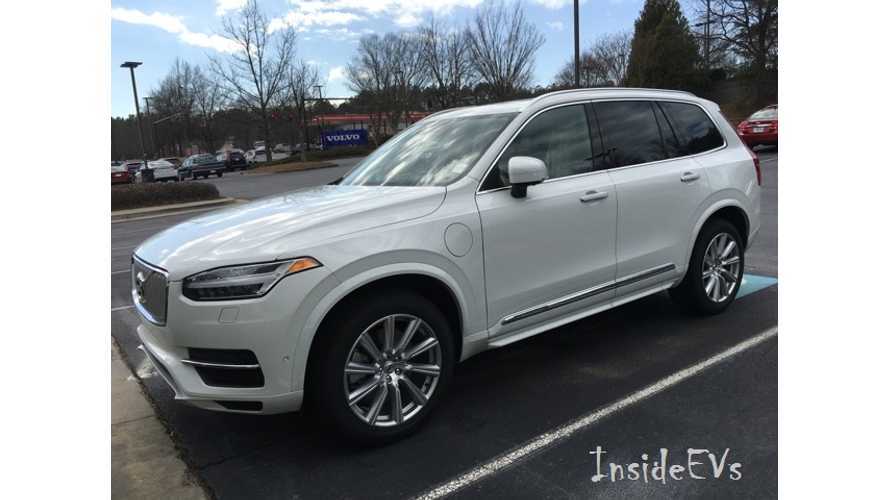 Not sure how, but once again Atlanta got lucky again with one of the newer plug-in vehicles on the market being available at a local dealership.

I inquired long time ago about the Volvo XC90 T8 since we were shopping for a new SUV and the dealer still had my name on file!

I was eager to drive the vehicle, as I actually now had something to compare it to. After being behind the wheel of the Porsche Cayenne S-Hybrid and the BMW xDrive40e, it was time to experience some Swedish engineering.

When I arrived at the dealership the car was ready for me and the salesperson pointed to a very stylish-looking SUV. It was parked next to the charger and my first question was:

"Is the car charged?" The answer was very typical: "Ah, that is what that thing on the wall is! They just installed it last week!"

The inside of the vehicle is very well done. It felt right. The seats, controls and the ergonomics were spot on. I also think the materials used for leather and wood trim were very well represented. But again this was an $82,000 Volvo. Being 6 foot 2, it was very spacious and comfortable in both the first and second row. The head room was a bit bigger than the X5 and there is a third row int he Volvo.

Transition From Electric To Blended

Big credit to Volvo on building the instrument cluster with EV economy in mind. When you drive the car, there is a blended tachometer that shows you what level of acceleration you need to apply to keep the car in the EV mode, if you go over this magic line, the ICE fires up. The transition is noticeably jerky though. At first I thought the engine was too cold, but after driving a bit on gasoline, I tried again and I am sorry to report, the Volvo needs a bit more fine tuning here.

T8 handles well. If your plan is to drive the kids around, then it's fine, but don't try to corner hard in it. Corner even the slightest bit too hard and you'll definitely slide a bit before the traction/stability control system takes over.

The drivetrain is setup with ICE power going to the front wheels and the rear gets powered by the electric motor. Therefore, if you are going in EV only mode, then you're not in AWD like in the X5 where the electric motor can control all 4 tires.

The battery position is in the middle of the car below the center console. Which is  why a third row of seats fit.

You have an ability to switch between different EV modes and, as I have mentioned before, the main control screen is very intuitive and graphics are easy to read.

The battery is 9.2 kWh. You'll find full specs on the car here.

I personally think Volvo will do well with this SUV and that it will appeal to a traditional Volvo customer who would like to be a little more green while driving.