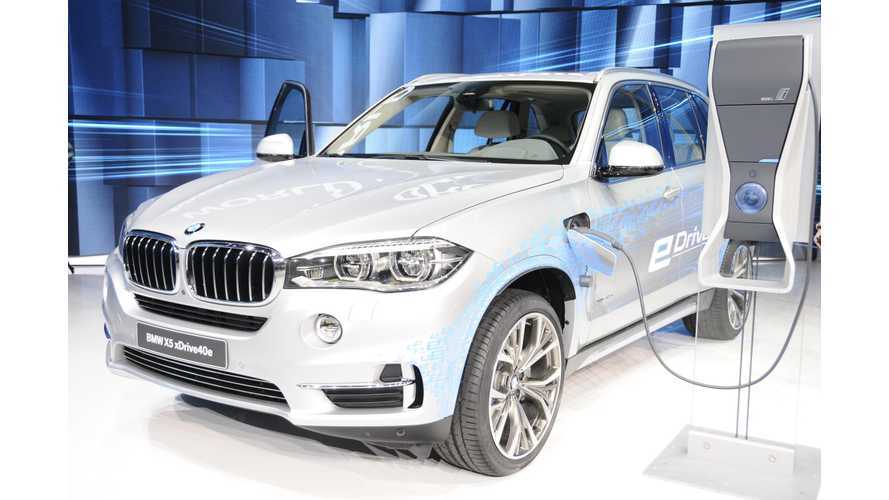 X5 xDrive40e is the latest plug-in hybrid from BMW, but this particular model has nothing to do with BMW i series.

On paper 308 hp of system power / 332 lb-ft of torque looks impressive, but all-electric range of 31 km (19 mile) NEDC (cut to some 13 miles in EPA estimates) is low, probably too low to achieve a big jump in fuel economy compared to the conventional version. There is just 9 kWh of batteries, after all.

Autocar, in a recent test drive report, said that the petrol engine turns on at any "commuter-style impatience" lowering the combined fuel economy. BMW states at least 43.5 mpg at mixed-use, 37-mile commute, but at twice the distance Autocar noted around 36 mpg.

"Certainly you’ll register the introduction of the engine (an event marked by the spasmodic flick of the rev counter needle) yet the actual pause in progress is negligible and the accelerator pedal consistent.

Register the merest hint of commuter-style impatience and the X5 will immediately have its petrol-fired components enhancing the motor’s modest 184lb ft."

"At 77g/km, not only does it fail to qualify for the government’s OLEV grant or evade the London congestion charge, but it also won’t hit the latest 5% BIK rate. Or even the less stringent 9% rate for cars up to 75g/km. "

"By failing to set the efficiency standard, or really advance the segment in any way that feels relevant from the driver’s seat, the X5 - as refined and as comfortable as it is - falls short of the high bar set by BMW’s own endeavour.

Expect future core brand prospects such as the incoming 330e to reset that advantage, but for now there’s no compelling reason for the xDrive40e to stick long in the memory."