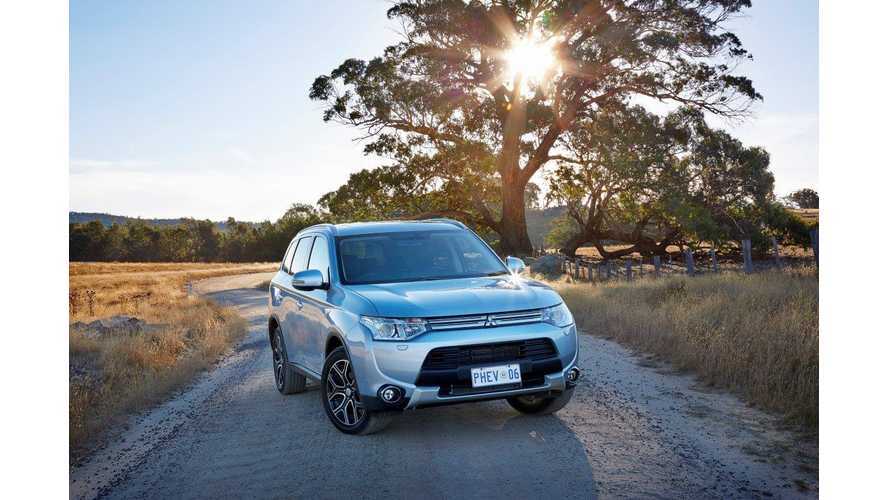 CarAdvice announced early in September that it's now conducting a long-term review of the Mitsubishi Outlander PHEV, which has been available in Australia since March from $47,490 AUD ($41,650 USD).

The Aspire is well equipped:

However, we found that there is no CHAdeMO inlet in Australia like in Japan or Europe. Without a decent network of fast chargers, it would be useless anyway.

At 15-amp it will take up to five hours to recharge the 12 kWh battery pack in Australia.

Update (Nov 11 - via InsideEVs community member Just_Chris):  Chris reports that the maximum current draw from the Outlander (via Mitsu) is 9.3A, so while a 15A plug is required/fitted to the charging cable, it would be fine to utilize a 15A to 10A converter for standard receptacles.  Closeby, Mitsu New Zealand have fitted their charging cables with a 10A plug, and Mitsubishi Australia may follow at some point as well in the future.

First observations from CarAdvice are positive and as it turns out 40-50 km of all-electric range is possible:

"Having said that, my initial impressions during the 77-kilometre (one-way) commute I endure from the lower Blue Mountains to North Sydney every morning have been largely positive."

"For the first 40-50km, the battery takes care of propulsion, while the petrol engine is ready to fire up at a moment’s notice. It does so under harder acceleration, or when the batteries run out of juice. The general result is that my commute is between 60 and 75 per cent emissions-free driving, and it gets better the more traffic I encounter due to the effectiveness of the regenerative braking system. I’ve been noticing a combined consumption figure of between 3.8 and 4.1 litres per 100 kilometres on the car’s instrument display, which has been as low as 2.1L during a particularly treacherous run."

"That is truly awe-inspiring for a family-friendly SUV that weighs 1810kg without my extra mass added."

Interesting is that "everyone" in the office of CarAdvice wanted to take a drive in the Outlander PHEV and quickly the SUV covered more than 3,000 km in just 30 days.

However, the initial lack of a 15-amp outlet at the CarAdvice garage meant that a big chunk of that mileage was in hybrid mode.

"the fuel use average we’ve seen is considerably higher than its claimed 1.9 litres per 100 kilometres – over five fill-ups, we saw 6.2 litres per 100km, which is still thoroughly impressive. Several staff members have taken the PHEV home to challenge its electric range since the 15-amp plug was installed, and I plan to share the car between some of our writers who live closer to the office than I do to see whether it’s a truly viable EV for family buyers."

CarAdvice plans to release monthly updates on the test. The first from six ends over 6-liters per 100 km (62 miles).