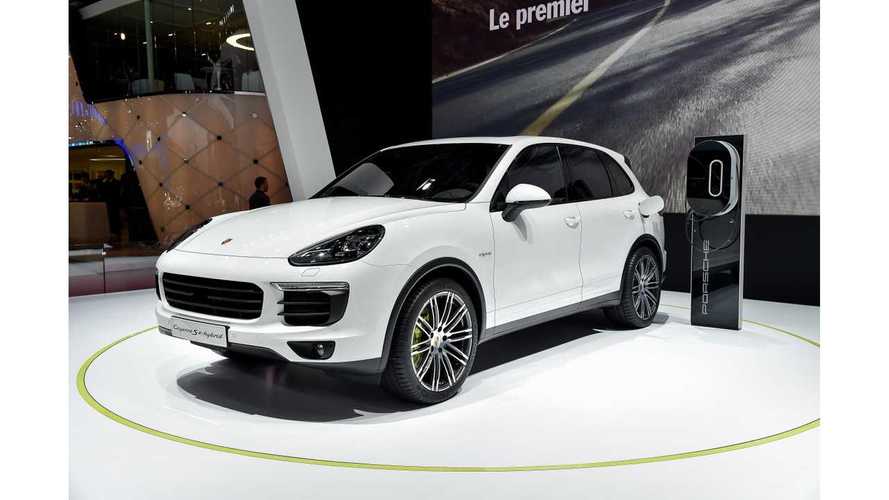 The Cayenne S E-Hybrid is the third plug-in hybrid from Porsche (the others being the 918 Spyder and the Panamera S e-Hybrid).

In the case of the Cayenne, the plug-in version replaces the old conventional hybrid with NiMH batteries.

As a plug-in, it (obviously) has more battery capacity, a more powerful electric motor and can drive on electrons further and at higher speeds.

Here is short description from our earlier story:

With a price tag $76,400 it will clearly be cheaper than the all-electric Tesla Model X and thus, it will be very interesting to see how sales of these two vehicles develop over time.  (Although our bet is that the X likely outsells the Cayenne plug-in by a significant amount, perhaps 5 to 1)

"The Cayenne plug-in’s powerpack is near-identical to the plug-in Panamera’s (a more energy-dense battery pack and all-wheel drive are the main differences) the pair proving surprisingly reluctant to engage their petrol engines to achieve decent progress.

In the E-Power mode the Cayenne will keep up with most traffic; press the accelerator more firmly and the supercharged V6 leaps into life, its torque faultlessly synchronising with the electric motor’s.

At which point you can access truly substantial acceleration, the V6’s revs rising with a slightly industrial and not unappealing rortiness.

Despite its substantial weight, the Cayenne handles with some panache. It rolls a bit, even in the firmest of its air springs’ settings, but that doesn’t prevent it from tracing curves with pleasingly assured confidence, your enjoyment heightened by the steering’s precision.

With both motors working hard, a decently sporting pace is easily achieved. There’s further entertainment to be had from trying to maximise your electric range through brake recuperation."

And in the "Should I Buy One?" category, Autocar states:

"It all makes this Cayenne a particularly interesting example of the breed, and if you successfully harness its powers, a pretty economical one too."

"The price of this revised hybrid is exactly the same as the V8 diesel’s despite the fact that this is a vastly more complex machine, and though the hybrid is slower, that makes this plug-in impressive value among full-size, premium SUVs."

A plug-in that's an "impressive value."  We haven't heard that stated often.