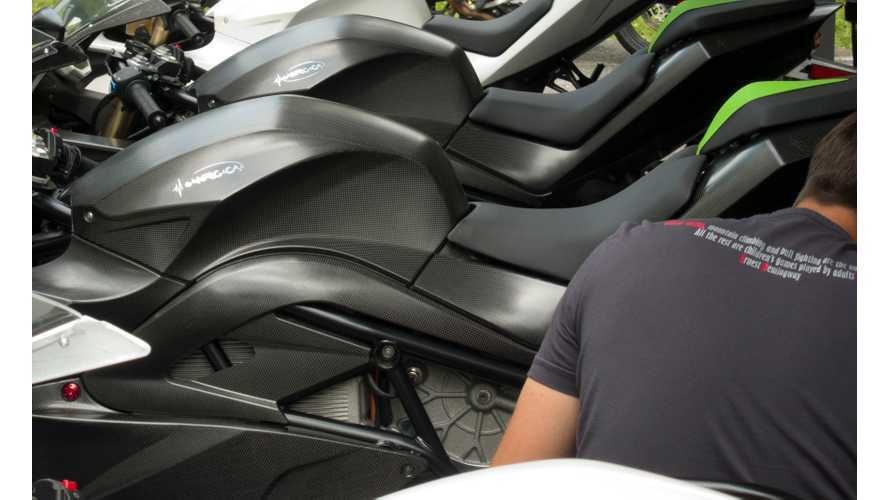 One writer made the comment "veni, vidi, vici", regarding the recent "Where's My Ego?" US tour by Energica - "We came, we saw, we conquered."  It's not far off the mark.  We've been following the progress of the Energica Ego coming to market, including some very interesting pre-production ride reviews released last summer, and had a chance to take the Ego for a spin on some classic Hudson River Valley twisties when the tour made it's stop at Bear Mountain (NY) in July.

Energica, as an arm of the Italian manufacturing and engineering company CRP, is unique among electric motorcycle manufacturers.  Every other company offering a product, or even a prototype, started with nothing more than an idea of designing and building an electric motorcycle.  Energica started with a 40-plus year history of engineering, prototyping and manufacturing for high-performance motorsports ...like Ferrari, to drop only one of many names.  They were on the podium of the very first TTXGP electric races at the Isle of Man in 2009, and soon after started work on the first drawings for the Ego.  Both the TTXGP eCRP bike and the Ego come from the drawing board of Giampiero Testoni, Managing Director of CRP Racing.

This puts them in the unique position of a somewhat "normal" product development trajectory, rather than a process that demands a company start-up curve coinciding with the product development curve.  The result?  We're seeing a product that, even only a year away from the projected launch, feels complete and evolved.  We're not seeing renderings, we're not hearing about seed money, investors and grants, though certainly they probably are at play in the background.  This is a product that has every indication of being, well, "real", in a climate of ever-present "vaporware".

Energica came to Bear Mountain with six bikes - two of the Limited-Edition Ego 45 model, with premium suspension components and some one-off Windform Process 3D printed trim, and four of the standard Ego models.

The bike's drivetrain is a liquid-cooled AC motor running at 300V with reduction gearing, which when combined with the final-drive chain gives you a sound unlike any bike we've ridden, with distinct pitches and tones at various RPM and load ranges.  It's noticeably loud, for a "silent" electric motorcycle and turns more than a few heads on the street.

The real secret to the Energica, however, is the complete application of the VCU (the Vehicle Control Unit) into the rider's control of the motorcycle.  By taking input from the bike itself - braking, suspension, G-forces and even GPS, and linking that with the electronics controlling the motor, you have uniquely sophisticated throttle response, motor-controlled regen braking and a host of other handling, speed and power controls.  The Energica VCU is a stand-alone system, tailorable to an array of input and control systems, for present or future components.

A great example of this is something we've read a lot about in rider reviews: the throttle response.  The bike uses a simple, though high-quality Domino throttle available as an off-the-shelf part.  Through integrating the throttle input with the VCU, Energica delivers a remarkable throttle response, unlike anything else on the market, which gives a natural transition between the throttle acceleration position, a coasting "rolloff" to a progressive regen braking.  It's hard to explain, but it feels perfectly natural even in the first few minutes of your ride.

Several companies have various degrees of VCU integration into the electric drivetrain.  The Energica Ego does it best, in the context of what is considered a "Production" product.

What's the result of all this sophisticated engineering?  A ride that, despite the bike's hefty 500lb+ curb weight feels light and nimble at low speeds, and predictable and perfectly well-mannered at the insanely fast speeds and acceleration the bike is capable of.  This bike by reputation alone is a machine that demanded our respect and caution.  Within a few miles it felt like an old friend.

The rider position felt perfect, but then, this is a bike with an Italian heritage.  It's a fairly aggressive, forward posture with more than average weight on the wrists, but at speed it seemed ideally balanced and comfortable.  The bars are narrower and lower than the Zero SR and many current sport bikes, and unlike any other electric bike we've tested, the footpegs were right where they wanted to be.  A small point, but a very important one when considering rider position and the feel for carving turns.

We had the opportunity to hit one particular section of twisty road repeatedly, allowing all of us to get past our lack of familiarity with the road and concentrate on the bike, the line, and getting the most out of both.  Suffice to say, we got to the limits of rider skills long before we hit the limits of the machine.  One reviewer commented that this bike is more fun than the Honda CBR600RR.  We'd have to agree.

There are a few more refinements we're going to be seeing at the release next summer.  ABS will be integrated, and a parking brake is in the works – a simple small disk on the rear with a mechanical, hydraulic control for safety and simplicity.  When you have a 500+lb motorcycle on a slight incline you don’t want to be looking around the parking lot for little rocks to chock the wheel.  One thing we'd like to see is a dial-type display for speed as an option to the numerical display.

Here's the ride video from that day.  We were asked to start in "Standard" mode with the regen braking set to "Medium".  We rode for a few miles up the modest hill to the summit, then stopped and were shown how to change the settings.  Setting the bike to "Sport" mode with the highest regen braking setting gave us a ride that was everything it was billed as.  The last sections of the video were the road we got to ride a few times.

Conclusions? Take a look at these comparison specs, on The Electric Chronicles, where you see the Mission, Lightning, and Ego matched up spec-for-spec.  At $38,000, the Ego falls between the Mission R and the Lightning 218, and also falls somewhere in the middle in terms of performance.  The Lightning is the only bike of the three that is significantly faster, at a claimed 218mph top speed, though that number comes from a non-production fully-faired prototype under competition conditions.  The price for that performance is only $4000 more than the Energica, but with a significant caveat: we have yet to see either the Mission or the Lightning in it's actual production form and the Lightning advertizes the bike will be "built to order".

Is the Energica Ego a bargain?  No, but it's not intended to be. It's cutting edge technology, and you are going to pay for that. Is it practical?  With an advertised range of nearly 100 miles, it's at least in the running for what the current state of the art for electric motorcycles is, but the 300 mile-a-day cruiser riders aren't going to think much of it.  Is it a real product, available to mere humans?  Out of any of the bikes in it's class, we can say that this is a bike that seems like it will be here when promised, as promised, with support, and for years to come.