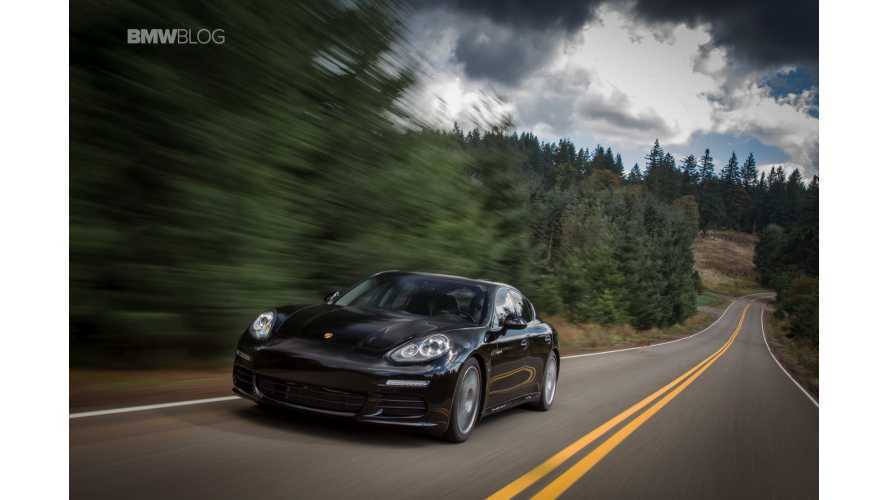 Though Porsche’s 918 supercar gets the most attention in their line up, lurking further down in the Panamera and Cayenne lines are two more Porsche hybrids. Like it or not, alternative means of powering the modern automobile are here to stay and not even Porsche is immune to having to develop new power trains with new fuel economy and emission standards.

The Panamera S E-Hybrid is a parallel Plug-in hybrid, which means it can be charged up from charging station and drive in all-electric mode, pure petrol power or a combination of the two. The electric drive motor has 95 hp and is powered by a 9.4 kWh lithium battery in the rear of the car. Porsche states that this is able to be fully recharged in 2.5 hrs on 240V from either a home or public charging station.

The more powerful electric motor and bigger battery are a big improvement from the 2011-2013 Panamera S Hybrid that only had a 47 hp motor and 7.7 kWh battery. Just as with BMW plug-in hybrids, the Porsche has the ability to pre-condition the cabin of the car via heating or cooling while connected to the charger, which can extend the range of the car once under way.

Think driving the Panamera Hybrid is boring? Think again as this thing scoots from 0-60 in 5.2 seconds and has a top speed of 167 mph. The low-down grunt of the super charged 3.0 L V6 combined with the instant torque from its electric motor combine for an astounding 435 lb-ft of torque available from a mere 1250 rpm and it carries up to 4000 rpm.

My first experience behind the wheel was in pure electric mode. With the air conditioning fan whirring keeping the cabin and the radio on, the only hint I had that the petrol motor was off is the tachometer dead center reading zero.

In all electric mode you can travel up to 84 mph and Porsche states pure electric range of 20 miles if you can drive in an eco friendly manner. Because of the well insulated luxurious cabin, only from outside the car is the electric motor whine noticeable. If you depress the gas pedal more than 80 percent even in e-mode, the engine will kick on, providing instant torque from the supercharged V6 under the hood. I went in and out of pure e-mode to adding and/or dropping the engine and it really is a seamless transition. The motor relays fires up quickly and never stumbled when called upon from a deep sleep.

This hybrid does have brake energy regeneration but it really doesn’t lend itself to a one pedal style of e-driving. If you lift of the throttle while underway, the car will coast and coast and coast. It’s nuts. I expected some type of regeneration when you lift but it likes to sail. Applying the brakes, you either experience regen or if you push harder, the Panamera S E-Hybrid has great stopping power but the transition can be abrupt.

Driving dynamics are quite different than other Panameras because the rear-wheel drive only E-Hybrid has to lug an extra 717 lbs that the hybrid electric system adds over a base rear wheel drive Panamera, ringing in the sales at 4,619 lbs. Ugghh. Driven in a sedately manner though, as I suspect most will, and it’s less noticeable. And as with other Panamera’s, you are always aware of its 197 inch length.

As far as the looks go, the Panamera is grown on me and reminds me some what of the exotic look of a female bodybuilder. I find myself strangely attracted to her, yet am afraid she’s gonna kick my ass. There are neon lime green accents are all over the Panamera Hybrid including the needles in the instrument cluster, name badges and even brake calipers. They look good with a black car but might not look so good with other Posrche colors.

Dash technology is just nuts. Tachometer for the petrol engine is dead center and frequently reads zero when your driving eco friendly. Just to the left of it is a power meter. Then there is battery charge, the numerical gear Tiptronic is in, oil temperature, Park Assist, Water temperature, fuel gauge and second from the right is a configurable color display gauge. Buttons aplenty are found everywhere of the Panamera DashE Power. E Charge. Zer German Philosophy is one button and one function.

It’s hard to quantify how efficient the Panamera is because so much depends on distance driven and how it’s driven. One owner was able to travel 1000 miles one tank of gas.. The Panamera S E-Hybrid is listed at 50 MPGe and 23 mpg combined, not bad given its 4600 lbs of German luxury conveyance.