BMW i3 - Owner Review From the UK 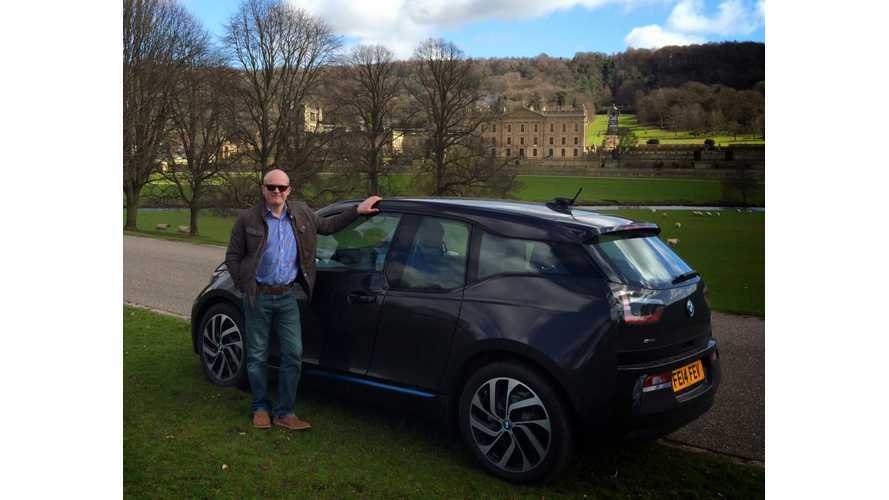 As Tom Moloughney writes on his “The Electric BMW i3″ blog:

“A while ago I announced that I would be starting a new series here called, “I was Born Electric on…” I’ll be featuring readers who are i3 owners and who are willing to share their thoughts on the car after taking possession. Without further ado, I bring you Ross from the UK.”

Pistonheads BMW i3 Review Convinces Ross to Check Out i3

I will start this blog by saying that I am totally obsessed by cars. I love cars, I always have, and the cars that find their way into our household are usually of the performance variety, ranging from TVRs to Hondas with even the occasional 4x4. To be perfectly honest, electric cars had never really appeared on my radar. I was aware of them obviously, but had never considered owning one. My view was that most of them were slow, couldn’t go very far and generally a bit dull.

However, one of my favourite websites is Pistonheads, and I happened to read their review of the new BMW i3 back in October. Wow! This sounded like one exciting little car. So, at this point I started doing some more research, reading every i3 review I could find. At this time, my car was an E92 M3 and my wife was driving a Jeep Grand Cherokee. This meant that we had two cars that were pretty expensive to run. Both had annual road tax of £490 and not so great fuel consumption. So, the i3 was beginning to sound attractive as it was fun, funky and cheap to run. That the electric only version could be run as a company car with zero benefit-in-kind was the clincher.

i3 Grabs Some Electrons

So, it came to be that I ordered an electric only i3 without seeing or test driving one - with the proviso that I could cancel my order if I didn’t like it when I test drove it. I had to wait about 3 weeks till the 16th November before I could get my hands on one.

Is it a real BMW?

I have owned three BMWs previously, an E46 330i (saloon), an E91 335i (touring) and the E92 M3 we have now. My wife had also owned two minis, a Cooper S and a Cooper S JCW. So we had high expectations. Before getting our test drive, we had an opportunity to have a good look around the showroom car. The consensus from all the family was that it was larger than expected and that from the outside the overall appearance was ‘funky’. Inside the i3, it was even better; the interior feels really modern especially with the large central nav screen.

We were blown away on the test drive. Putting your foot down just elicits a huge grin. It is such a hoot to drive. The instant and rapid acceleration takes a bit of getting used to but is addictive. Also being able to drive with just one pedal is great and it only takes a few moments to become accustomed to it. We were sold!

It really does drive like a BMW; the way it handles the road and the feel of the steering all felt familiar. Since taking delivery of my own i3, I have also taken it to a local sprint circuit. The circuit is only 600 metres in length but over 3 laps the i3 was great. It really surprised most of the people there and I was posting times that were quicker than two MX5s, an MR2 and and an E36 328i. I have also since discovered that the i3 is compatible with the ///M laptimer app. That said, don’t buy one as a track car! The range was down to just 43 miles on the day including driving there and back on a dual carriageway. The M3 is much better suited to track work.

Track day in the BMW i3

For anyone considering the purchase of an i3, the options list can be a bit daunting. I chose laurus (laurel in the US) grey which I am really pleased with and the standard interior because I liked it! Suite was a consideration but at £2,000 I felt it was too expensive. I have recently discovered that the mood lighting with colour change is not included with the standard interior - this isn’t mentioned in the brochures or the website. I was lucky to get the Pro Sat Nav free as I placed my order early and I think everyone should consider this as it really suits the interior of the car. I ordered the heat pump option as BMW erroneously told me this was required to preheat the vehicle - it isn’t. Supposedly this gives better range in cold weather due to more efficient heating, but as I have nothing to compare it too I have no idea how effective it is. The Harmon Kardon hi-fi option is utterly brilliant and I am really pleased that I added that to my spec. In my opinion the standard wheels are awful, and the 428 alloys I ordered receive very positive comments. The heated seats are the fastest / hottest of any car I’ve owned and therefore a must.

I’ve had the car for just over two weeks and already done more than 900 miles. Range anxiety really hasn’t been an issue although I have got home a couple of times with only 3 miles left. It’s a great car and it seems that for the distances we generally travel it is going to meet most of our journey needs. For those occasions when it doesn’t I will just have to put up with that howling V8...

*If you own an i3 and would like to participate in the Born Electric guest blogger series, email Tom at: tom.moloughney@gmail.com