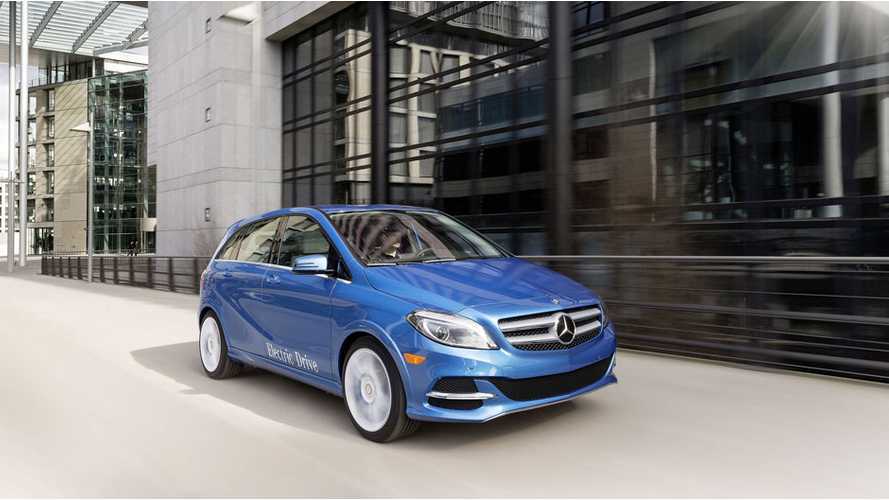 The Mercedes-Benz B-Class Electric Drive is now nearing its US launch date.

Scheduled to go on sale in select US states in mid-2014 (nationwide availability has been pushed back to early 2015), M-B's first entry into the US' BEV segment (excluding Smart ED) is much anticipated.

The B-Class ED combines a few firsts for the US' BEV segment.

There exists no BEV in the US that can match or beat those claims in a compact crossover body.

Additionally, the B-Class ED is:

But the real question is how does the B-Class ED drive?

For an answer to that, we need look no further than Autocar who recently posted an extensive first-drive review.

Before delving into the drive review details, let's first say that the B-Class ED is the quickest (0 to 60 mph) B-Class ever made!!!

Let's now move onto those driving details, as provided by Autocar:

"The power delivery is wonderfully linear and every bit as energetic as the official acceleration figure suggests, providing the B-class Electric Drive with more than adequate performance in typical urban driving conditions."

"Paddles on the steering wheel allow you to alter the state of brake energy recuperation in three different modes, from aggressive to mild and coast – the latter of which disconnects the drivetrain to provide a free-wheeling effect."

In regards to weight and efficiency, Autocar claims the following:

"The energy consumption of the new Mercedes-Benz is significantly higher than the BMW at 18.0 kWh against 12.0 kWh."

On the performance/handling front, Autocar says:

"The B-class Electric Drive handles in a tidy and predictable manner, thanks in part to its electric motor and battery being mounted low, with the result that its centre of gravity is 40mm lower than regular B-class models. It’s no sportscar, though."

And for those who we're wondering, the B-Class ED comes fitted with run flat tires as standard.  Those tires, when coupled with stiffer springs and shocks, lead to a " firmer ride than conventional combustion engine siblings," reports Autocar.

In the ever so important "Should I buy one?" category, Autocar states:

"Mercedes-Benz is yet to announce pricing for its first ever series production electric car, although it is expected to reach the UK at close to £25,000 with a £5000 government rebate. This will pitch the B-class Electric Drive directly at the BMW i3. While it has ease of operation, quality and practicality on its side, it lacks the verve, handling prowess and outright efficiency of the more advanced i3."

It seems Autocar is saying that it depends on your preferences.  If you value practicality and ease of operation, the the B-Class is the winner.  If, on the other hand, handling and efficiency top your list, then the BMW i3 is the EV for you.