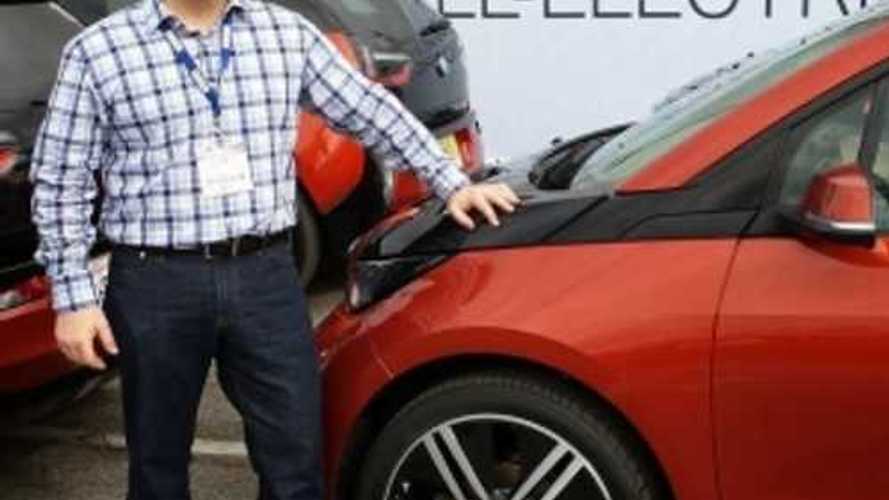 It's been a long time coming, but I finally got to drive an i3.

I've actually been getting tired of having journalists contact me and ask me for my opinion of it on the road compared to the MINI-E and ActiveE and having to tell them I haven't had the opportunity to drive one yet!

So, did it live up to my (high) expectations? Yes, it did.

It's certainly not "the perfect EV," but in my opinion it does do more things better than any other electric vehicle that cost less than $70,000. And yes, the $70,000 is the threshold mentioned because slightly above that, (actually $72,240) is the starting point before incentives for the least expensive Model S you can buy in the US.

Though Impressive, the Tesla Model S Should Not be Considered a Direct Competitor to the BMW i3

Price is worth mentioning here because since the i3 has launched, there have been endless comparisons between it and the Model S. My contention is that they are both excellent electric vehicles and while there will be inevitable comparisons and even some cross-shopping, they are really vastly different cars and if they weren't both electric, would never be compared. The i3's base price is $42,275. That's $29,965 or about 40% less than a base Model S and that alone should end the need to compare them. However, I feel it was important to touch on this because everybody else is. These are both excellent EV's, but they serve different masters. The one thing fascinating about the Model S is that it's such a great electric vehicle, that every other electric vehicle that comes along will now be compared to it, well done Tesla.

In addition to my test drives, I had the opportunity to sit down and interview just about every BMW representative there and I will do a future blog post dedicated to at least one of those interviews. However, here I'm going to focus on my thoughts on the driving experience and answering the many questions about the i3 I've received in the past few weeks in the form of comments, personal emails or posts on the BMW i3 Facebook page or in the BMW i3 forum, both of which I am the administrator of.

BMW had fifty identical i3's at the LA Auto Show for test drives. They were all exactly the same color, had the 20" wheels, the top of the line Tera World interior and had every available option the i3 will offer. I later found out from BMW NA i3 product manager Jose Guerrero that these cars were actually the very first i3's to roll off the assembly line and that they were pre-production vehicles and European spec so they had to be updated with US charging ports, navigation software and other small modifications so they could be used here in the US for test drives. Also, after the LA Auto show these cars will gradually filter to dealers all over the US so depending on where you live your local BMW dealer may get one soon for demonstration and test drives.

Lined Up and Ready to Go

What about the range extender?

Unfortunately, none of the cars had range extenders, so I can't answer many of the REx questions I've had like: "How quiet is it?, Can you feel the vibrations when it's on? and What MPG does it deliver?" I did learn some new details which I'll discuss later in the post though.

I will say this though because the question of how robust the range extender is has been a common theme on every website that has an i3 discussion. At a private event on Thursday that BMW held for the ActiveE drivers that question was brought up and Jacob Harb, BMW's North American manager of sales and strategy for electric vehicles said he wanted to straighten out the confusion around a comment that a BMW representative once said, and that was that the REx wasn't meant for daily use. Jacob said you can certainly use it every day if you need to, but that BMW didn't envision the car being used by someone that has a 120 or 130 mile daily commute. The car could do it, but if your daily driving needs were this extensive then perhaps a different vehicle might be a better choice.

He was then asked about taking it on a long drive and refilling the take and continuing to drive. Again he said that BMW doesn't really envision people using the car like that all the time, but technically it's perfectly capable of doing so. He even said that technically speaking, you could drive an i3 from New York to LA simply by stopping for gas every 50 or 60 miles and refueling, and then qualified it by saying "But I don't know why anybody would want to do that." and personally I agree. ;)

Time to Stop for a Photo Op

I actually had the opportunity to drive it twice and to do a ride along once so I probably spent a collective 20 miles in them. I had a press pass so I registered for a press drive and then at the ActiveE event we were all allowed one test drive plus I rode along when fellow Electronaut Todd Crook took his turn. On the first drive, BMW handed me a course that they wanted the press to follow. It was basically a 3 mile loop that had you driving five blocks and turn right four times and you ended back where the ride originated from which was the Staples Center parking lot.

You were alone, so you could of course vary from the course if you "got lost". Being from New Jersey and never having driven in LA before I found it difficult staying on course and accidentally drove a little longer. It was pretty much what I expected it to be. Very quick, (we were told it does 0-60 in 7.0 seconds) very quiet (quieter than the ActiveE for sure), it has very responsive steering, an amazingly short turning radius and the braking was probably the best I've ever experienced. I practiced some emergency stops in a parking lot and the car stopped in exceptionally short distances. I can't wait to see official road tests when they measure braking distances. I predict it will deliver some of the shortest braking distances of any car on the road today.

Time to Put Some Miles on the Odometer

I really didn't get the chance to push the handling because of the LA city environment but I did have some fun weaving in and out of traffic, sprinting from streetlight to streetlight and mashing the accelerator to the floor at every opportunity. I don't know how it will do auto crossing (yet), but I give it an A+ for making the most fun you can out of city driving. I even tried out the Parking Assistant and it worked perfectly. I also purposely hit every pothole there was - and incidentally LA doesn't have nearly as many of them as we do in New York, and the car absorbed them without a problem and I didn't hear any unusual rattles or noises that I've read a few other journalists report when driving over bumps.

The regenerative braking was about 10% weaker than it is on the ActiveE, but it's still by far the strongest regenerative braking on any electric vehicle. I'd say the Volt in low driving mode and the Model S are tied for 2nd, but the i3 has stayed true to BMW's promise of having the strongest regen in the industry which really allows for "one pedal driving". Like on the ActiveE there is what BMW calls a glide mode (basically the ability to coast to improve efficiency). By slightly easing back on the accelerator, the motor decouples and the car freewheels. While this isn't what you would normally need in a city driving environment, it will come in handy at higher speeds on the freeway. By easing back a bit more on the accelerator the motor then reengages and the regenerative braking grabs.

The seats were comfortable and supportive and felt like they would do fine holding you in place during spirited driving but definitely don't grab you into place like seats in a sports car would. This, plus the lack of a center tunnel on the floor does allow you to easily slide across to the other side of the car and exit out of the passenger side if you wanted to, which I did just to see how easy it would be.

The back seats have plenty of room for two big adults. I even brought along three passengers on my second test drive to see how we all fit and if the extra 600+ lbs would effect the driving dynamics. The car was slightly slower as you would expect but the handling felt just as good as when I was driving alone but again, I couldn't push it much on the streets of LA but I did make some rapid lane changes at about 40 mph and the car felt precise and planted even with the full load.

As I mentioned above I've had a lot of people ask me i3 questions recently and I promised I'd do my best to get answers once I drove the car and had the opportunity to speak to the program managers again. Without listing the specific questions here the answers to most of what I've been asked:

*End note: For more on BMW i3, including additional images, check out Tom's blog by clicking here.
++