BMW i3 Test Drive Review: From a Mini E and ActiveE Driver's Perspective

A Wolf in Lambs Wool…for the city

The BMW i3 from a Mini-E and ActiveE driver's perspective.

I’ve witnessed and participated in, the evolution of electric transportation and of this car, the BMW i3.

Much has been said and written by the world automotive press, pundits and enthusiasts about the i3. But this is writing from a non-journalist (me) that has loads of seat time and years of experience in electric transportation and the ramp up to the i3.

As one could imagine, I have high expectations for the BMW i3, as the result of my four years and nearly 70,000 miles of seat time in its two predecessor prototypes.

First, the 2009 BMW Mini-E, a rudimentary prototype produced under contract with AC Propulsion. It was twitchy, hard sprung, a blast to drive with tons of torque steer and a very light front end. This car showed me the way to electric mobility powered by sunshine.

Second, the validation car, the BMW ActiveE which was produced in house by BMW. The ActiveE is a very refined and well behaved luxury coupe that sadly my wife gets to drive far more than I. A happy marriage was the result of my acquiescing to Julie when she unexpectedly pronounced that ‘she’ was going to be the driver of the BMW ActiveE. I was disappointed but not stupid.

Editor's Note: Our thanks go out to Peder Norby for allowing us to share with you this exclusive test drive review of the BMW i3.  This post first appeared on Peder's blog, which you can check out by clicking here.

As I prepare to switch from the ActiveE to the i3, I’ve come to realize that evolution is simply the wrong word for i3.

The BMW i3 is a Revolution

A game changer that will reap benefits for decades for BMW up and down its complete product line ushering in an era of lightness, higher torque and higher performance. A brilliant and bold decision that will at first seem odd to the general public as they see the i3 singularly as a “non traditional” BMW. (I suppose the Isetta was traditional?) but will make complete sense in the decades to come as BMW fills out its "I" product line with electric motors and carbon fiber bodies and begins the migration of same to the BMW M and normal series cars as well as other BMW owned brands.

BMW and Carbon Fiber will be “stitched together” forever in history as the biggest advancement in auto manufacturing since the introduction of the assembly line. Lightness, quickness, instant torque, connectedness, effortlessness and the premium luxury will be the hallmarks of future BMWs.

The i3 is a car that is woven together by brilliance rather than generically stamped out of steel by brute force.

As a typical red blooded American male, I came of age and learned to drive in my brothers 69 Dodge Charger with a 440 magnum and idolized my friends “old” 67 Chevy Camaro. So, I can understand why one or two of the performance oriented car mags were less than excited about the i3. They’ll get there eventually, perhaps with a ride in the BMW i8 in the near future.

I dare any Camaro or Charger of any vintage to line up against my i3 at a stop light along Hwy 101 in Carlsbad Southern California. While the “muscle cars” gather their enormous strength from a high octane fuel flowing through 400 moving parts making crazy heat and beautiful noise ultimately getting to the tires, slowly working up to the sweet sport in the RPM range, I’m gone with a simple effortless press of the go pedal, the light-speed of electrons, and I’ll see you at the beach or coffee shop later.

The juxtaposition of the extreme effort required by high performance gasoline cars, with their drivers holding the handbrake, revving their engines and then destroying their clutch, all so they can launch quickly from the start line, compared to the i3 where the driver simple depresses the go pedal and holds on to his coffee or cell phone is striking.

The brute strength of a 350 pound NFL offensive lineman vs. the graceful refined strength of Usain Bolt comes to my mind.

As I said, I’ll wait for you at the beach while you try to find a parking spot large enough for your beast.

The BMW i3 lives in the city and so do I.

Never before have I been in a car that is so effortlessly quick. The feeling of lightness, effortlessness is a new reality in driving and defines the car. I’ve driven the Tesla Model S and there is no comparison for speed, the Tesla wins, but the refinement, lightness, ease of entry and driving position, tight turning radius, incredible design excellence of the interior and sensors that allow for semi autonomous driving such as parking, adaptive speed control and collision avoidance technologies all position the i3 well ahead of the Tesla Model S for city driving.

Don’t get upset Tesla. Range, weight, cost and yes your “mine is bigger than yours” monster screen in the dash are all much much greater for the Tesla Model S.

The i3 looks great in person, It’s not a coupe or a sports car but a small UTE-CUV type of a car with a high seating position and an aggressive and pleasing stance. Closer in kin to the BMW X1 than the BMW Z4

The BMW i3 is solidly planted on the road at speeds just like the ActiveE or any BMW. The i3 for me seemed even quieter than the ActiveE which is amazing. The interior on the i3 was the highest class of the three interior worlds/options and it was indeed higher in quality than the ActiveE. More room than a 1 series, on par with a 3 series with the hatch and folding flat rear seats providing functionality that is superior to a sedan.

The carbon fiber roof of the i3 is awesome, and there are many areas where you can see the carbon fiber such as the door sills and when you open the rear hatch. BMW left a lot exposed to remind all that this car is made from CFRP. 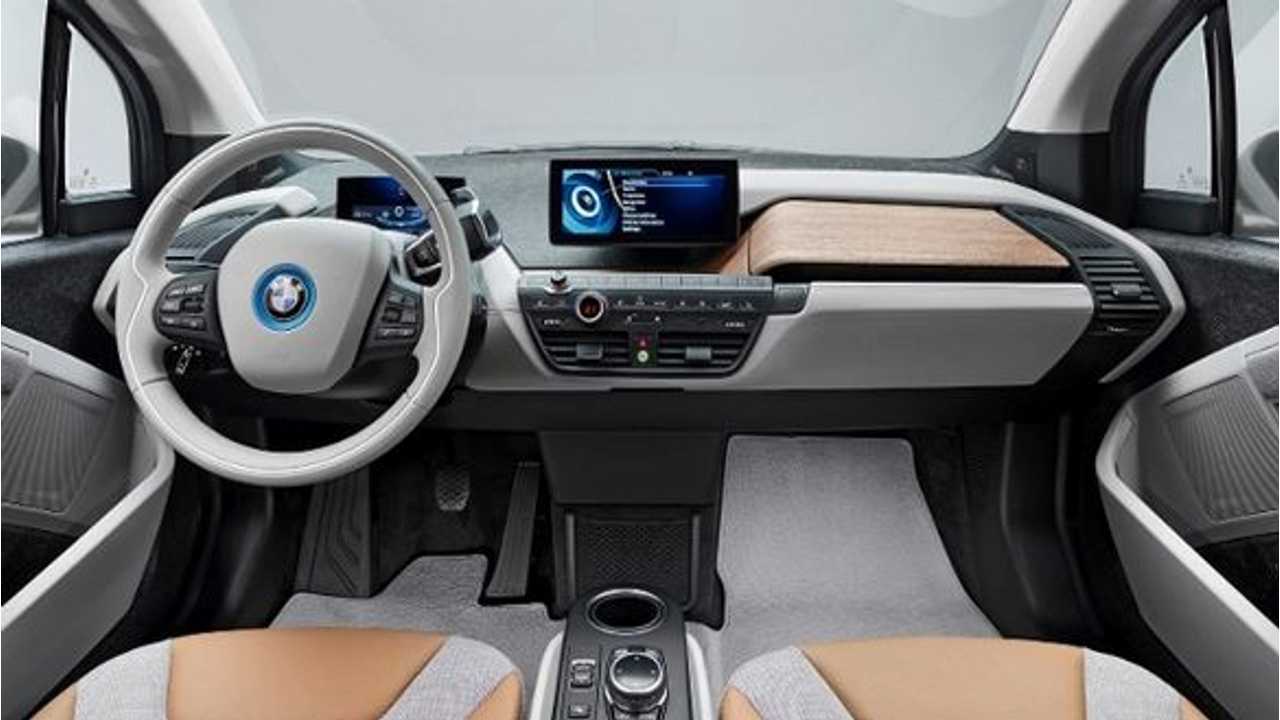 But back to being a red blooded typical American male auto enthusiast for a moment. I suspect that BMW had a slightly female bias in mind when designing this car, It’s just to darn practical and smart to be designed for a ego-auto-centric male such as myself. The whole stitching and weaving a car together with a loom is very feminine compared to the manly brute force of stamping steel and welding. Dudes weld.

Well get over it guys.

The BMW i3 is a blast to drive, quicker and easier than any gas drinking car off the line. A butt hugger around corners and you’ll be able to do donuts in a space as small as the half basketball court in your driveway. Get a set of 16 inch rims and wide slicks and you'll be the kick ass king of the stadium auto-cross.

To get your testosterone really flowing, you'll have the daily pleasure of making some Mustang or Camaro driver envy your attractive rear lights while shrinkingly reassessing what really drives their manhood at the same time.

The only question for us (we got over range anxiety years ago) is do we buy two i3’s right off the bat or do I, the strong, car-guy, city male, wait a year or so until the sports or coupe model comes out.

Choices are good, the BMW i3 is great.

It will be a world-changer car, I hope they can make enough of them. We'll take two.

Editor's Note: Again, we urge you to check out all of Peder's blog for more on his electric driving experiences.

By: Peder Norby
++
Got a tip for us? Email: tips@insideevs.com