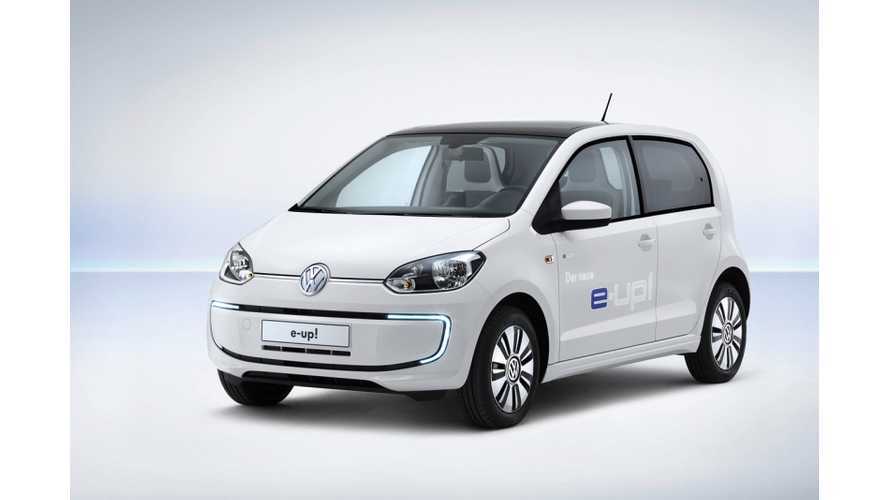 As the Volkswagen e-Up! rolled across the stage at the 2013 Frankfurt Motor Show, the conversation rightly turned to "I wonder what it's like to drive."

Autocar is Pleased With e-Up!

Well, first we must point out that the e-Up! is not coming to the US, so most of us won't be able to buy one and that unfortunately means we''ll be missing out on a really fine urban EV.

How about some specs before moving on?

Okay, now that we've got that out of the way, let's turn to the ever-so-important "What is it like?" section of Autocar's e-Up! review

"As ever, it is the on-the-move experience that sets an electric car apart. The silent progress is broken only by road noise, the instant torque is a revelation that does much to put the 12.4sec 0-62mph time to the back of your mind. As a result, the VW e-Up is a car that feels swift and special, so long as you are willing to reset your established values."

"It’s a surprise, too, how little the additional weight impedes the car. At 1139kg all-in, it is far from light, but there are palpable benefits in ride quality. Handling, too, is reasonable, even if the suspicion is that the extra weight negates any benefits from the lowered centre of gravity. Only the steering disappoints, delivering virtually no feel, although VW is far from alone from facing that accusation in this field."

In terms of real-world range, Autocar was mightily impressed with the e-Up!  Granted testing was done in ideal range conditions, but here's what Autocar discovered:

Plain on the Inside

"For what it's worth, we drove 70 miles on hilly public roads with energy conservation in mind at all times, consuming energy at the rate of 9.3Kwh/100km – which gave the Up a genuine range of 112 miles from its 18.7Kw battery. That's a reasonably extreme example, but shows VW's claims are realistic. It is an impressive distance to cover on a roughly  £2.80 charge, too."

Finally, in the "Should I buy one?" section of Autocar's review we find this:

"The final assessment of this undoubtedly fine car must also wait until we know its exact price. In Germany it will sell for around £22,500 pre-grant. As a result potential buyers will have to weigh up the benefits of owning their battery, as in this case, or paying out less initially and leasing the battery, as with the Renault Zoe."

"What’s clear, though, is that the arrival of more competition, and smaller electric cars, is bringing prices down and widening the niche of potential buyers for which they have a practical benefit."

But, as we stated from the get go, you can't buy one if you live in the US, so other alternatives must be sought.  Those include the Fiat 500e (sold out), Smart Fortwo Electric Drive (available in cabrio version, too), Honda Fit EV (waiting list only), Mitsubishi i-MiEV (inventory basically depleted) and Chevy Spark EV (available out West only).  So, the only vehicle that compares to the e-Up! and will soon be available in most of the US is the Smart ED,  but it only seats 2.

Yes, nationwide options are still scarce in the US...it shouldn't be this way, but it is what it is.