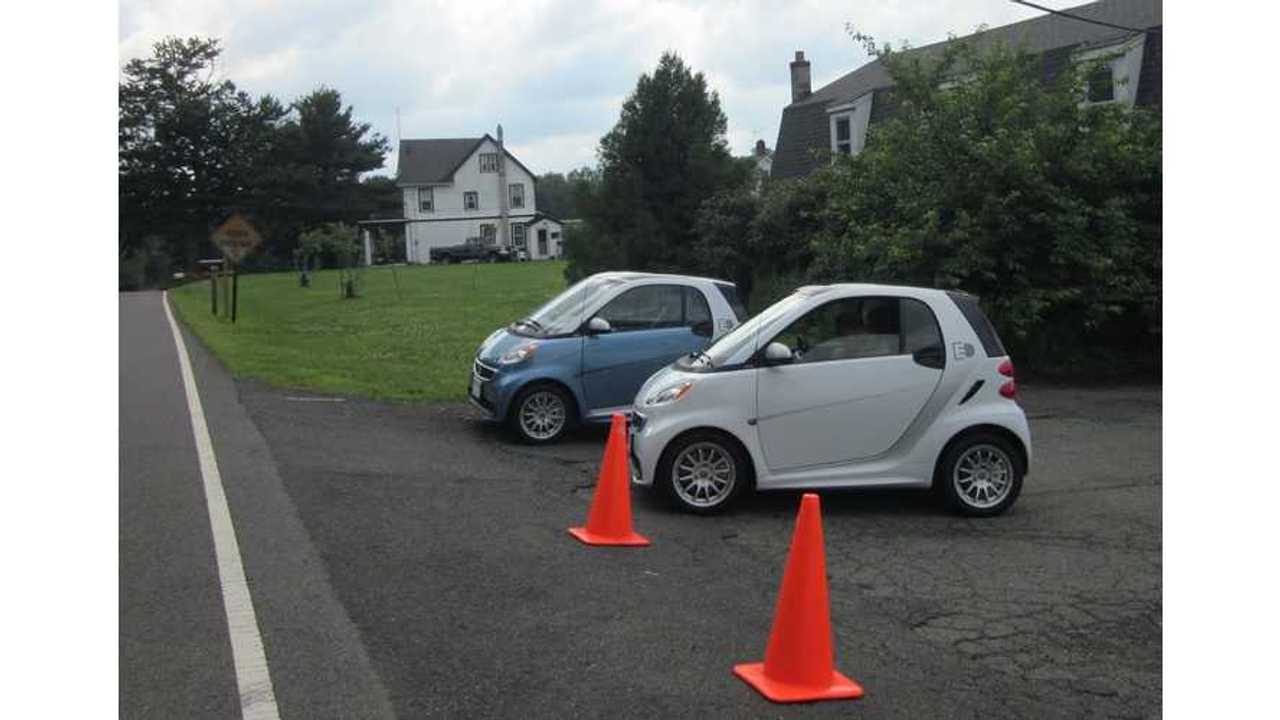 This past June, the New Jersey Electric Auto Association, which I'm an active member of, put on a SmartED Test Drive event.

Powered by a Potato

So what is a SmartED?  Well, it is the all electric Smart car, manufactured by Daimler AG and ED stands for Electric Drive.

This is not their first attempt at an electric Smart – what we have here is the 3rd generation.  The first generation, called Smart Fortwo EV (that badge would be larger than the car) in 2007 was a conversion by Zytek Electric Vehicles and this was really a field test.  This Smart was painfully slow with just 41hp coming from the 30kW electric motor.  0-60 was not measured in seconds.   Range was reported to be 68 miles and that was probably extremely optimistic. The battery was a 13.2 kWh sodium nickel chloride Zebra battery and was listed as taking 8 hrs to fully recharge.  Not very impressive but it was 2007, so we will give this one a break.

How did they do with Generation 2, not much better, in fact worse.  Horsepower dropped to 27 with the motor putting out 20 kW, oh but wait, for 2 minutes the motor could jump to 30 kW or 40hp, at least torque was steady at a healthy 89lbf-ft and torque is what EVs are all about.  There was no 0-60 sprint listed it was 0-37…so….nothing really to see here.   The battery was a 16.5kW lithium-ion with a range of 84 miles – still overly optimistic.  Top speed was 62mph, yes you read that correctly, this is not a car you want to take on the highway and Daimler did recognize this car as being city friendly.

Those two generations pretty much faded into the EV darkness, so one would think that would be it…..nope….3rd times a charm, right?  Well….kinda…yes.

If the SmartED is driven in the right environment which is not a big one, then we’ve got a fun little EV.  Horsepower is up to a steady 47hp (35kw) or can jump to 74hp (55kW) briefly in boost mode.  Torque increases to 97 and top speed is 78mph.  Now we finally have a real 0-60 time of 11.5 seconds which in Smart speak is quick.  Though there is still a time of 0-37 time listed – now a blistering 5 seconds compared to earlier versions.  The battery is fattened up to 17.6kW and range is 87 – still optimistic – however in a city or an urban environment, which is where I feel is this EVs sweet spot, it is more than enough.

Moving on to the Test Drive

Enough of the history, back to the test drive.   We had two SmartED hard tops to play with and as I walked up to them I realized how small these cars really were. It is just a two seater with a hatch, two of them combined still are smaller than some of the tiny econo-boxes on the road.  Though, I was really excited to drive one, it looked fun and I’ve never driven a Smart car of any kind much less been in one.

Inside the Smart Fortwo

Once inside it was roomier than I expected, the dash is simple, this is a no frills runabout, but things are tidy.   I quickly scanned the dash for the gauges that told me what the battery was doing, there are two little pods on top of the center of the dash, the left pod tells you the state of charge in percentages and the right pod tells you if you are regenerating or using juice.  There is an LCD readout as part of the speedometer that tells you other important EV details like how much range you have left and how efficiently are you driving.  Straight forward and functional.  I myself would like more info such as kW/mls efficiency and a digital readout of the SOC, that might be there but I did not play long enough with the controls to find them and I really just wanted to take this puppy out.

Took Forever to Get This Thing Started

The SmartED is a little old school in that you insert a conventional key into the ignition which you will find between the front seats.  There is a transmission stalk in the same area which you move into D – now you are ready – well almost.  It took me a few times to turn the Smart on.  There seems to a few steps to take and in order before you are ready to roll.  I had to coordinate myself such as putting the foot on the brake, turning the key to on – how long do you hold it in on? – and placing into D all in the right sequence.  Sounds simple but it wasn’t. The car looked and even sounded like it was engaged but it was not and there was no obvious indicator to tell you otherwise.  Only when taking your foot off of the brake and pressing the accelerator only to suddenly roll back (we were parked on an incline) did you realized something was not right.  I did this as did many of the other test drivers, it was not intuitive and I hope Smart fixes this.

Getting Ready to Zip Into Action

Seating position was surprisingly comfortable, sitting upright you get a commanding view outside so the SmartED felt bigger than it was.  Hit the juice and your off, this is no EV rocket but it scoots along confidently and in normal driving will hold its own, one thing I noticed immediately was the steering, it feels great.  As I sped up and approached some bumpy twistys I could feel how solid this chassis was..  This is really a solid and rigid chassis, this car feels 2 to 3 times larger in mass than it really is, a good thing, and is confidence inspiring.

Over bumps it was really stable and planted.  Acceleration was adequate cruising around 40mph, it has more kick from 5mph to 35mph then backs down above that – clearly setup for city driving.  My test run was on some hilly twisty roads at 40mph and this car felt very much at home.  I was quite pleased with how stable this little car was, it was tossable, it was fun and it was low stress, a very easy car to drive.

I had the advantage of being a passenger with about 8 other test runs and all of the test drivers had that same satisfied look on their face.  Many of the drivers were not new to EVs but were new to Smart.  Some had VOLTs, Focus EVs or ICE vehicles and all of them liked the SmartED  and one said it would be her second EV – it was perfect for around town.

I could definitely see myself tooling along to the store to pick up some milk or running to the post office in the SmartED.  Now, this is what I mean by the right EV in the right environment.  This is a runabout, fantastic for inner city or rural areas where going from point A to B to C to D all in a few mile sprints with tight parking available makes this car shine.  By the way, this car has one sharp turning radius, felt like it could turn around on itself and on initial acceleration the SmartEDs pedestrian warning system starts up, it’s a little hum, not unattractive but very noticeable even when inside the car.

As luck would have it there was an ICE Smart car that showed up and the driver let me try it.  This gave me a great comparison between the two.  So if you are an experienced Smart driver you are going to absolutely love the SmartED, that ICE Smart driver did.  First of all there is no vibration, secondly, gone is that jerky transmission and lastly it is faster and feels more planted…the whole eco-friendly part is a bonus.

To make things even more interesting another driver that stopped by had a Tesla Model S P85 or the performance edition of the Model S and he tossed me the keys and asked if I’d like to drive it.  I was already in the driver’s seat before he finished his question. After the drive and when I stopped laughing like a baby I looked back at the SmartED and realized that as amazing as the Model S is and I still want one, the SmartED also has its place.  The Model S is not a grocery getter, it’s a big fast amazing grand tourer.  If I had both EVs to choose from daily I’d probably take the SmartED down to the local store for quick errands – it’s easier to maneuver in traffic, it’s easier to park and if you want to get right down to it, it is more efficient but is still a hoot to drive.   The SmartED would compliment anyone’s EV garage.

Maybe Not Ideal for Those Who Live on Massive Farms, But in the Urban Environment, This Electric Machine is a Dream

To sum it up, if you live in the city or urban area where charging is available to you and your driving style is multiple jaunts to different locations or a short commute go to your Smart dealer and try one, they even have a cabriolet version.

EVs of any kind are amazing cars, I’ve driven so many now and see value in all of them.  For those small ICE cars known for buzzy, wheezy engines and less than adequate performance, an electric powertrain transforms these cars into satisfying drivers. Truly they are EVs or, as I liked to call them, exceptional vehicles.

Full details on the all electric smart car can be found here.

For pricing information on the Smart Fortwo Electric Drive, including its crazy cheap $139 per month lease, click here.

All Photos (Except Where Noted) and Video Copyright 2013 Chris Neff

* A special thanks to Open Road Smart of Bridgewater, NJ for providing the SmartEDs for this ride and drive event - ask for Larry for your own Smart test drive.