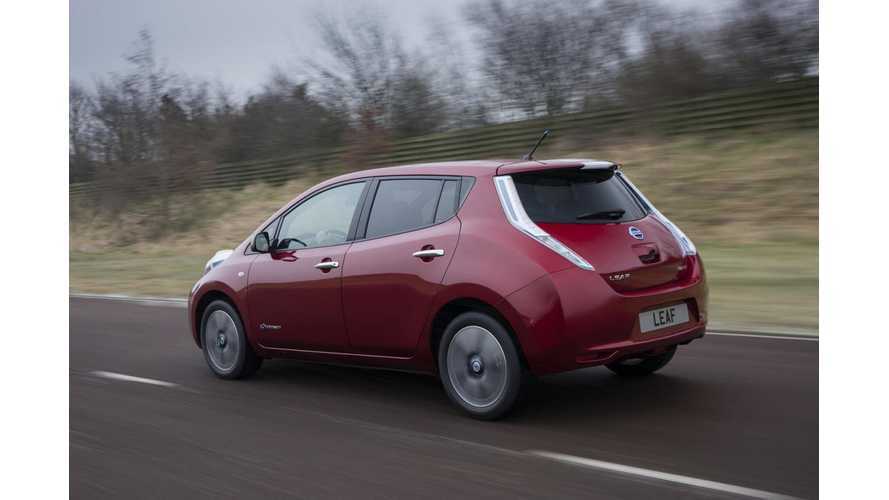 Known in the US as the LEAF S, Nissan's entry-level LEAF forgoes several niceties in order to keep its price to the bare minimum.

Over in Europe, the base LEAF goes by the name of LEAF Visia.  It too omits several items to get down to a low sticker price, but are the omissions too much to deal with?

First up is Auto Express' verdict: 3 out of 5 stars.

Here's the opener from Auto Express:

"We drive the new entry-level Nissan Leaf Visia, which cuts the electric car's starting price to £15,990."

"The changes to the way the LEAF handles are welcome, and this new budget price tag is great if you’re willing to pay between £70 and £115 a month to lease the battery pack. It’s a shame that you don’t get the efficient new heater, though, because it drastically improves real-world range. We’d recommend a higher-spec LEAF instead."

As Auto Express points out, the introduction of the entry-level Visia, along with the new-for-2013 option of leasing the battery pack separately, slashed the Nissan LEAF's out-of-pocket price from  £23,490 to £15,990 after subsidies.  That's a substantial price cut, but there are some drawbacks.

Here's a bulleted list of what Auto Express wasn't too fond of:

On the upside, the 2013 Euro-spec LEAF is lighter, quicker and more agile than the 2012 model, says Auto Express, who adds this list of positives in:

Nifty Charge Port Light on All Versions of LEAF

But it seems the biggest gripe Auto Express had with the base Visia model is in regards to two features Nissan doesn't include on the entry-level LEAF:  Quoting Auto Express:

"Nissan claims to have boosted the range from 109 to 124 miles, but we noticed little change. These entry-level cars also don’t include a new regenerative mode for the drivetrain or a new pump system for the heater, which you get in the more costly Acenta and Tekna.  The latter is supposedly 70 per cent more efficient than the Visia’s system, which effectively cut our range from 90 miles to 70 when we switched it on. Nissan says Visias will have a real-world range about 20 percent lower than other LEAFs."

20 percent is surely a big deal, so we too agree with Auto Express' reasoning that buyers would most likely be more satisfied with either the Acenta or Tekna over the entry-level Visia.  And since the mid-level Acenta costs less than £3,000 more than the Visia, it's money well spent.