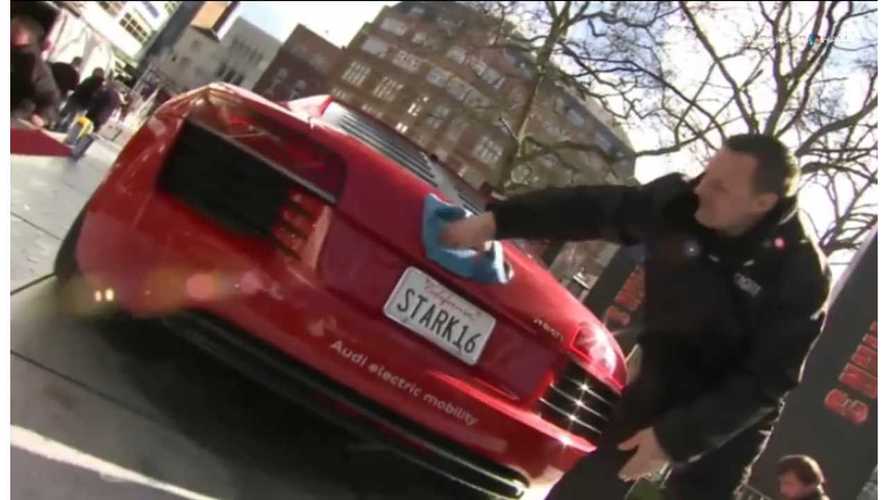 ...If Only The R8 Could House Tesla's 85 kWh Of Lithium Cells

In the on again/off again world of the Audi R8 e-tron, the lights in Germany have definitely been shut off permanently now as Audi has shelved any plans for the car that at one time called for a 1,000 electric R8s a year to be produced.

When Audi made the R8 e-tron's death official last week, final production stood at only 10 cars;  none of which will be put into private hands.

The remaining cars have (and will be) used for testing, development and promotions for the brand ...such as feature product positioning in the blockbuster film series Iron Man (see the car get lots of face-time here), and for test drives to select journalists in Europe.

To that end, we figured we would promote Autocar's ironically named "First Drive Review," because they (and quite likely everyone else) won't be getting any more in the future.

"One thing’s for sure: this is not a dull car. Press the start button and a bassy synthetic thrum fills the cabin. Select ‘D’ with the stubby gear lever, release the electronic handbrake and the R8 glides away."

Autocar finds the e-tron's interior near identical to the 'standard' R8, except of course for some specialized instrumentation putting out all the need-to-know EV specs; power usage, range, etc.  That...and the lack of a rear-view mirror.

The reason behind the installation of a 6.8 inch digital display instead of a rear-view mirror is part of the primary reason given for the cancellation of the R8 e-tron - lack of range range.

Despite the back being so crammed full of lithium cells (48.6 kWh worth) that a rear camera was needed to see what was happening behind the car, the e-tron R8 could still only achieve a little more than 130 miles of range.  With customers now used to up to 265 miles of range out of a purpose-built Tesla, it was going to make the Audi electric supercar a hard sell.

"Squeeze the e-tron's throttle and, instantaneously, the electric motors spool and propel it forwards at a seemingly relentless rate. The throttle has a natural-feeling and linear response, impressive for an electric vehicle, while the braking system delivers barely perceptible transitions between regenerative and physical braking...There’s a satisfying amount of feedback from the steering, assisted by being able to more easily hear what the tyres are doing, and the R8 corners in a flat fashion."

The above quote contains all superlatives you would expect from a vehicle that looks exactly like Audi's near perfect convention R8, however it is even more impressive when you realize that there is an additional 1,270lbs of battery and related components on board.

Even with this added heft, Autocar says the R8 e-tron  "never felt unwieldy or liable to break away unexpectedly. The ride quality is firm, predictably, but comfortable."

Technological Whiz-Bang of a Car Valued At Over $1.3 Million Dollars

Audi’s torque vectoring system lets the "nose tuck in hard" and continue in the direct its pointed when the car is reaching the limit of natural adhesion.

"It’s a peculiar sensation but one that’s particularly gratifying, as you can feel the rear wheels being individually braked and accelerated to help maintain the desired line."

The Audi like most electric vehicles today has adjustable drive modes (although we are unsure why anyone would be choosing anything but the sportiest of sport modes), but also has adjustable stability controls, which makes it more of a pleasure to drive when you are pushing it to the edge, as well as making the driver (and/or test journalist) look like a much more capable driver than they might actually be in a normal supercar.

Autocar also takes some effort to give credit to Audi engineers who were clearly developing this car as a mass produced consumer vehicle and not just a show pony.

"Equally satisfying is the depth of engineering in the R8 e-tron. Take, for example, the flaps in the apertures of the wheels. At speeds over 31mph they are forced closed by centrifugal force, reducing the e-tron’s coefficient of drag by 0.02Cd. Drop below that speed and they open again, allowing more air to flow over the carbon-ceramic disc brakes."

In The End, The Combination Of The Tesla Model S' Range And The Production Of The Mercedes SLS ED Left No Market Need For the Audi R8 e-tron To Fill

It is a great car, it is good supercar, but nothing escapes the fact that if you drive it as it was intended you are only going about 100 miles at best.