Places Not The United States: Plug-In Sales In Canada For September 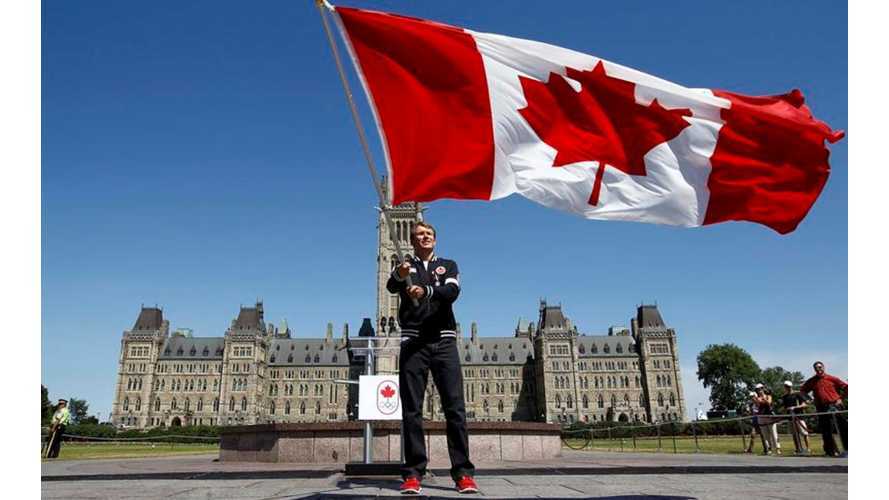 Legally, The Only Time You Are Allowed To Wave A Canada Flag This Large Is If You Are Canada's Olympic Flag-Bearer (Which Triathlete Simon Whitfield Was In London This Year)

Every month we dutifully report on every plug-in electric car sold in the US by manufacturer and model, we attempt to dissect the reasons behind why some electric cars overachieved while others did not and what the future may bring.

View From Every Canadian's Back Door (Banff National Park)

But to add a little diversity to the site (and to take break from all the US number crunching), each month we randomly pick another country to spotlight how the EV battle is being fought internationally.  This month we don't have to travel far:  Canada

And because yours truly is the only Canadian out of the 11 people who write here at the site, and that I personally have bought 50% of all the electric cars sold in Canada, the assignment falls to me.

Overall the prospects for selling EVs in Canada are quite strong as the country has one of the highest GDPs per capita in the world (9th), and 43 percent of Canadians aged 25 to 64 possess a post-secondary education; over 50% for those under 35.  Electric Vehicle incentives vary by province with some offering nothing, but others offering as high as $8,500.  A few examples:  Ontario - $8,500, Quebec - $8,000, British Columbia - $5,000

ON TO THE NUMBERS!!!

I'm Not Going To Explain To You What A

As in the US, the Chevrolet Volt leads the way, having sold 214 copies in the month of September (that is a lot for Canada), and like the US this result this month, it represented an an all time high.

Year to date Chevrolet has sold 927 Volts.   GM really wants to sell the car in Canada, and is finding a market for it.  The company offers both attractive financing and $2,000 in "customer cash" off the MSRP to anyone who knows what a chesterfield is.  (It is a couch)

Like M&Ms In The USA, But Smarties Do Melt In Your Hands, And In Your Pockets, Or If You Make Direct Eye Contact With Them

In second spot, is the Toyota Prius Plug-In.  Only 21* were sold in Canada in September, but if you will note the asterisk, it was also the first month the car was on sale, and Toyota moved almost everyone they put onto lots.  It is worth noting that while Canadians (unlike Americans) getting wildly excited at anything that comes in a hatchback, the Prius plug-in will never challenge for the EV lead in Canada like it is doing in the US.

While Canadians love Toyota, we really don't like the Prius.  For years Toyota played the game of huge pricing premiums on the car vs the US and blamed the dollar, then as it moved to parity years ago Toyota still barely budged.  Even today the standard Prius carries a $2,000+ premium ($26,000+$1,600 delivery) but if you dare to add an option make the premium $4,000.  The plug-in Prius starts at around $37,500 (incl delivery) in Canada.  Usually Canadian buy 1 car for every 8 that are sold in the US, for the Prius, it is 1 in 70.  We hate you Prius, go away and come back when you are priced right.

The Nissan LEAF (3rd place) also has had some trouble finding ground in Canada.   In September, only 16 LEAFs were sold.  It should also be noted that for the longest time, that (16) was also about how many dealerships 'approved' by the Nissan to sell them.  That all changes this fall, as the LEAF has been arriving to the unwashed masses of dealers across the country.

The problem now is that dealers are shunning the fact that all the cars are labelled 2012 when everything else on the showroom floor says 2013.  Nissan is offering dealers and extra $1,000 to pull inventory out of the LEAF holding pen in Vancouver, but few are taking them up on the offer, preferring to wait until that 2013 sticker (and projected price cut) starts getting stamped out of the cars from Smyrna, TN that begins production in December.  Year to date sales: 196

Don't Laugh, That Is Our $100 Bill, And It Is Worth More Than Yours.    Its A Polymer Bill And Is Virtually Indestructible...That Is Unless It Gets Really Hot, Then It Shrivels Up Into A Little Plastic Ball

Mitsubishi's i-MiEV, which never had the misfortune of being called the 'i' like it was for a time in the states, is Canada's 4th best selling plug-in at a respectable 15 units.  I say respectable in context of its US sales, which have stalled in the 30s for the last four months.  For the year, Mitsu has sold 150 i-MiEVs.

In reality, the car starts at $33,000, and that is just way too much to ever expect any depth of sales.  There is also the fact Mitsubishi Canada as a company only sold 50 cars this month out of 3 dealerships; all of which are located behind the old mall, next to the Arby's in the bad part of town.  (Truth:   84 dealers have sold 14,852 vehicles in the first 9 months of the year...but I'm pretty sure the behind the mall part is still accurate)

Past these cars, it gets hard to get a read on sales:

Ford, like its parent in the US, makes life difficult finding out how the Focus Electric is really doing.  I always get the feeling it is some kind of secret with them, or they are ashamed they are not selling more.  As shown by only releasing the Focus Electric news by tucking it in the bottom of some obscure press release referencing the MyFord app for the 10th time.

Fisker has 4 dealerships in Canada selling Karmas, and like Fisker in the US (and everywhere else in the world) they wouldn't tell you the time of day unless they were trying to fund raise from you.  Many provinces have incentives between $5,000 and $8,500 that you have to apply for, via providing proof of purchase, from that data, we proudly guess-ti-mate 3 Karmas were sold.

Tesla, unlike Fisker as zero dealerships in Canada, so I think you can imagine how many Model S sedans have been sold to date.  Zero.  Good news is that Tesla of Toronto opens in a few weeks, and there is a functional service station already in the Greater Toronto Area.  Two other dealerships In Montreal and Vancouver will also open in early 2013 (think March).

Tesla has however taken a great deal of reservations (and cheques) from Canadians to purchase the Model S.  Unfortunately, Tesla Motors communicates with Canadian customers about as well as I communicate with jittery squirrels.  Originally, Canadian customers where promised deliveries alongside US customers on early high end products like the 85 kWh Signature and Signature Performance cars.   That obviously didn't/is not happening, as Tesla has created a "Canadian list" of orders and we estimate the first deliveries of the Signature cars will happen in maybe December, with the regular cars shipping around March.

The Model S starts at $64,500 ($65,750 USD) in Canada.  This big pricing jump over the US entry level ($57,400) according to the company is due to not all versions of the car qualifying under the NAFTA/free trade agreement, thereby increasing the cost by about 6%.   We assume like with Toyota and the Prius, Tesla hopes Canadians are poor at math.  We aren't.  So sales are likely to be brisk to start, and not so much later on.

And that is it!  Now you know everything you need to (and probably more) about the EV industry in Canada.  Next Month, InsideEV writer, Lyle Dennis covers Russia and its 21 autonomous republics...he just doesn't know it yet.