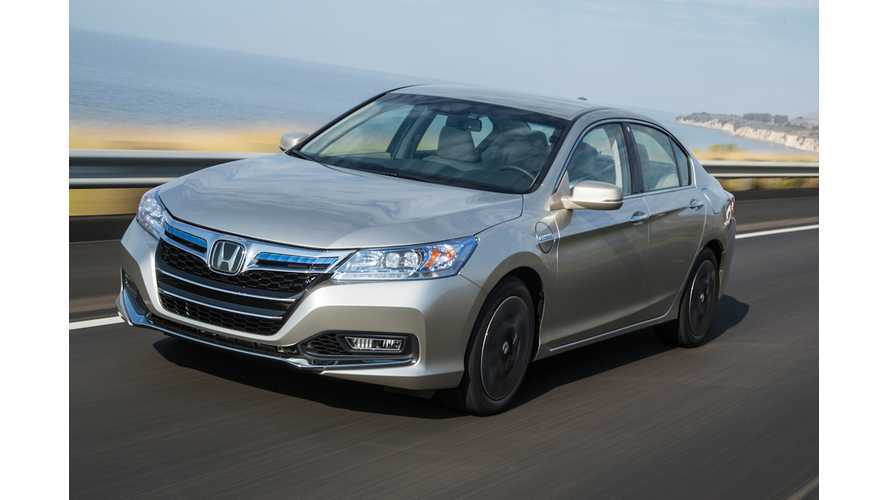 With time, would be EV buyers are seeing an ever increasing market of vehicle choices.

Some automakers strive to make their EVs look and act different than conventional cars.  Think Volt and Leaf. These cars announce to others on the road that the driver wants to avoid gasoline.  Other automakers are simply offering plugin-hybrid drivetrain options on current conventional models.

The first one of these soon to hit the road is the Ford CMAX ENERGI. Conventional and non-plugin hybrid versions of this car are also presently being released.

Honda plans to sell a plugin version of its high volume bread and butter Accord sedan.  Although InsideEVs hasn't yet had the chance to test this car yet, reporters over at Extreme Tech and several other outlets have posted their thoughts on the vehicle.  These journalists were given 10 mile short trips in a production intent prototype.

Basically they describe driving the car as a "non-event".  It drives like any other normal and the onset of the gas engine is non-obtrusive.  The small 6.7 kwh lithium ion battery will allow up to 10-15 miles on the battery alone and because of its size can be recharged in an hour.

Honda’s plug-in system differs from its Insight  and Civic hybrids. The gas engine is a 2.0-liter Atkinson-cycle inline-four and the Accord plug-in has two electric motors.  The first motor charges the battery pack and other one to propel the wheels. The gas engine puts out 134 hp and has 111 lb-ft of torque,while the drive motor outs out 161 hp, and the electric motor/generator is rated at 100 kW.

Fuel economy in hybrid mode will best the Volt and Honda overall expects the official EPA rating to hit over 100 MPGe.

While running in EV mode, the default start, the gas engine will go on during high load demands such as speeds greater than 60 MPH or certain uphill climbs.  The transfer from electric to traditional gas power is said to be seamless.

The journalist found the car "quiet, quick, roomy in back, expends energy going uphill and gets a lot of it back heading downhill."

Pricing is unannounced but believed to be around $35,000.  A $3740 federal tax credit will be available to buyers.

So if you are an Accord lover and want to avoid gas for short trips and achieve excellent overall fuel economy without compromises, this car could be your top choice.  Though it won't be everyone's choice for many reasons that is the beauty now having of the range of options we are finally seeing in the plugin vehicle market.  A great thing indeed.