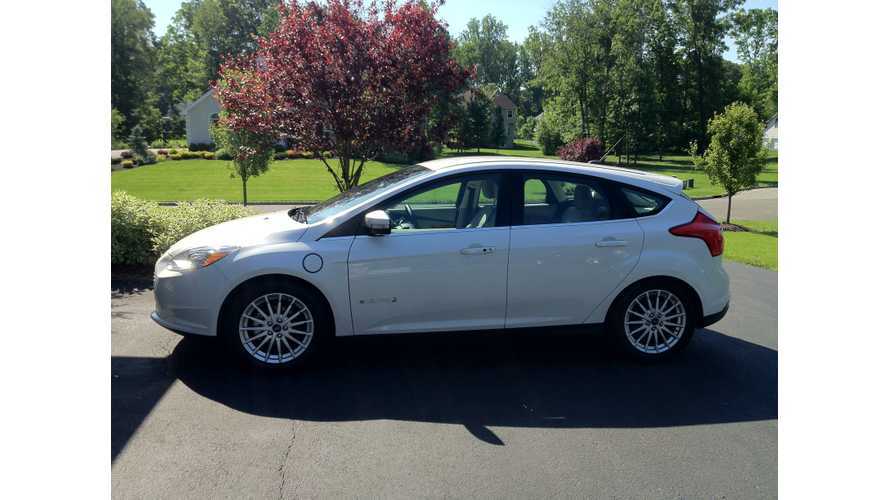 I have just completed spending one week with the brand new Ford Focus Electric car.  The vehicle is just now arriving to waiting owners this month, with only a handful at this point delivered.

The vehicle marks Ford's first entry into the retail plugin market and it is a pure electric car.  Unlike other automakers, Ford has not made the Focus electric as a standalone car.  It is instead an optional drivetrain for the Focus which is also available as a gas version.

The car possesses a 23 kwh thermally managed battery pack and Ford claims a 76 mile real world expected driving range.  It is priced full of technological features at $39,995 before a $7500 federal tax credit.

I have driven several electric cars and hybrids, and personally have been driving a Chevy Volt for the last year and a half as my daily car.  I used the Focus for all my real world needs for a full week, including shopping with my family of five.

The Focus has a very nice design.  It is a medium sized hatchback with European flair.  It is low to the ground with large-looking tires and wheels, is wide stanced and taut.  It has a graceful and aggressive aesthetic and doesn't have a dorky green-car look.  Though low to the ground I found it never scrapes in locations where my Volt front wind-foil always does.  The grill is interesting and futuristic.  There is ample visibility both front and rear.

The side mirrors have a smaller wider-view mini mirror embedded to provide two views simultaneously, and there is a rear view camera.

Ford has chosen to keep the design the same across the Focus lineup such that the gas and electric versions only differ in drivetrain rather than giving the EV a specific look.  Ford is doing that with other cars too like the Fusion and C-MAX.

I would say I found the car quick, light, and nimble.  Even though the heavy pack keeps the car stuck well to the road it doesn't make the car feel especially heavy, something other EVs tend to do.

It is more or less a normal driving car but the electric motor is butter smooth and whisper quiet.  I mean really quiet.  It is the quietest EV I have ever driven.

The brakes are strong and a bit grabby but never became uncertain in my week of driving.  Regenerative drag was absent in the D position and just minimal in the L position.

The interior was not big.  A little cramped but bright and airy.  It was adequate for two adults and three children in the rear with additional cargo space behind the rear seats.  The cargo bay was about 30 percent reduced as the battery sticks up into it.

I enjoyed the dashboard displays.  They were futuristic with clean graphics and intuitive use.  The center touch LCD display had a myriad of options which were easy to find and use.  There is navigation which also allowed you to see nearby charging stations.  The radio and smart-phone interfaces were smooth and fun to use.  Ford and Microsoft's Sync system allows for voice control of everything the dash could do.  I tried it a bit but frankly never enjoy much success with these, though admittedly I never read the training manual.

I outlined my experience with the eco-coaching displays and iPhone app here.  Those were very well executed.

Overall I drove the car about 200 miles in my 6 days of use.  My daily commute is only 6 miles round trip, though I go on 60 or so mile excursions a couple of times per week.  I had no trouble meeting my regular driving needs with this pure EV.  I charged overnight using my Voltec 220V charger.  The Ford is capable at charging at twice the rate of this system, or about 3 hours from empty to full.

The vehicle displays the most likely range on the dash based on previous use, and for me that showed the same 76 miles the EPA has rated it at.  This was real and easily achievable.  The vehicle had so far a lifetime efficiency of 275 watt-hours/mile for the 900 miles it has been driven since production.

Currently the only production EVs on US roads now are the Nissan LEAF and the Mitsubishi i. The LEAF is rated at 72 miles of range, and the Mitsubishi 62.  Having driven them I would say the Ford is a bit faster and much sleeker in design, but beauty is of course only in the eye of the beholder, in this case mine.

The Chevy Volt is a different beast and has far more utility due to its gas range extender.  It does, however require me to use about a gallon of gas per week to cover that 200 miles, something the Ford allowed me to avoid.  A small tradeoff for increased utility and same basic price.

The Ford Focus Electric is a well-conceived and well-executed pure electric vehicle.  It is sleek, fun to drive, and full of the latest technology.  Its 76 mile range is real world and will easily be even better for feather-footed hypermilers.  The price of $39,995 (before $7500 tax credit) is steep when considering the fact that an identical-shelled Focus gas version is only $18,300.  Buyers at this point in time will still pay heavily for the privilege of driving on electricity.