Lithium-ion battery costs for electric vehicles are falling continuously, basically since they were ever invented, but of course, the progress varies. It was the quickest in the early days as there were many low hanging fruits (easily available improvements), but even in the recent years, the price drop is still substantial.

According to the Department of Energy’s (DOE) Vehicle Technologies Office estimates, the cost of an EV lithium-ion battery pack declined 87% between 2008 and 2021 (using 2021 constant dollars). That's quite an achievement, almost an order of magnitude within some 13-years. 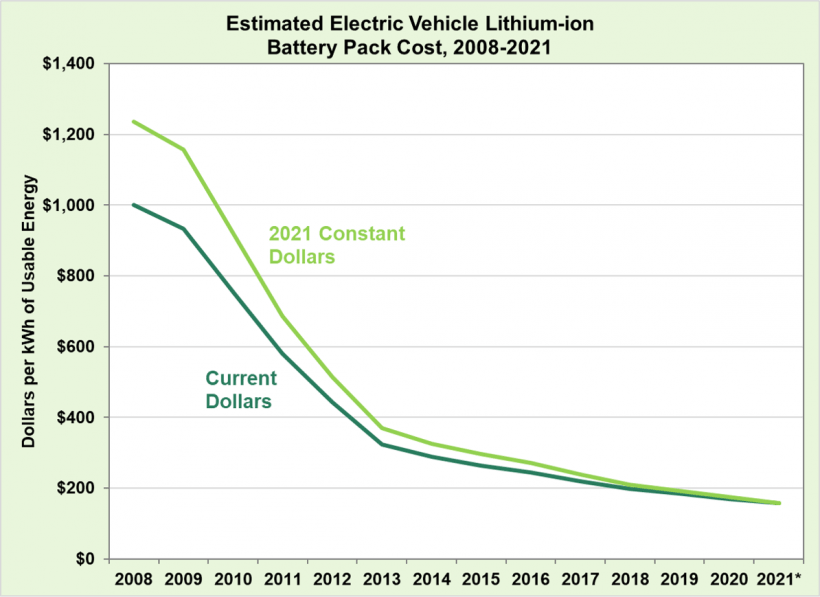 The numbers are amazing and this already has opened the way for long-range EVs with bigger batteries and mass electrification.

At this point we would like to note that the exact numbers are not precise, as no one has a real world average of battery pack costs for the entire industry - these are just estimates.

The most important thing is that the parallel progress on the chemistry level, production level, module/pack design level and simply a higher scale, results in a rapid improvements.

As we can see on the chart, provided by the U.S. DOE’s Office of Energy Efficiency & Renewable Energy, we crossed the $200 line about two years ago - in 2019 - which means that nearly 25% was cut within two years.

There are sill many areas of improvements, new chemistries, new packs, and even bigger scale - not 10 but 100-times bigger than today. It will all translate into lower battery costs, which in combination with improving energy density, will allow us to electrify... everything.