In its latest financial report, for the second quarter of 2021, Tesla has included an interesting chart about its market share in three major markets: U.S./Canada, Europe and China.

As it turns out, the company's position improved significantly after the Model 3 was launched and since then the market share has been gradually improving (with some temporary fluctuations related to a variety of reasons).

According to the chart, Tesla's market share just crossed 1% in Europe and China, while in the U.S./Canada it strengthened to above 1.5%. That's a noticeable level and a good foundation for future growth.

It's pretty impressive that Tesla sold more than one in 100 new cars. Together with other brands, the market share of electric vehicles is becoming noticeable and in just few years should become substantial.

The majority might be achieved within 10-15 years (probably it will take longer on a global scale). Ultimately, all new vehicles on the market will be all-electric.

Some countries, like Norway, have experienced this entire process much quicker and they are interesting examples of what to expect, as well as proof that mass electrification simply works.

Only time will tell how quickly Tesla will be able to progress and whether we will see a 2% share later this year. A lot depends on the new Model Y from Austin and Berlin, which is dependent on the technologies - including 4680 battery cells and structural battery packs. We know that not everything is yet ready for prime time.

Anyway, Tesla is on the rise with four consecutive record quarters of electric car deliveries, strong demand, and new plants coming online in the coming months. From that perspective, things look good. 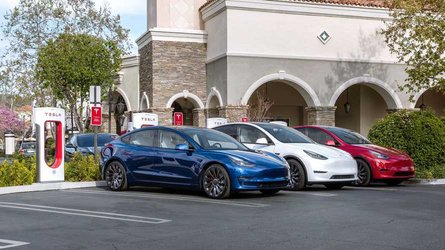 US: Tesla Pushes Back Delivery Times Of Non-Performance Versions
By: Mark Kane
++
Got a tip for us? Email: tips@insideevs.com